Plus weekly soups at Vinaigrette and Christmas drinks at Miracle

Reporting on news in the local food realm means constant excitement this time of year, so we'll just sleep when we're dead. At least we'll die with really full bellies. She’s Not Here, 40 North Pizza, and Old Thousand are all debuting $7 happy hour food and beverage menus, with half-priced bubbles to go with. At She’s Not Here from 4-6:30pm, happy hour diners can get two rolls with a choice of fillings including crab butter temak with radish sprouts, menchi katsu with kewpie ranch dressing, and nega hama temaki stuffed with yellowtail, crab paste, and charred green onion. From 3 - 6 pm, the choices at 40 North between 3-6 pm include a margherita pizza or their new fried chicken sandwich with Napa-Red cabbage slaw, buttermilk dressing, house pickles, and Fresnos on a challah bun. And at Old Thousand from 5 - 6:30 pm, it’s mala fried chicken with Szechuan salt and chili oil, chili wontons with hot chicken, black vinegar, and chili relish, and Dan Dan noodles with fermented chili relish, egg, scallions, and peanuts. Half-priced sparkling wines are available at all three restaurants.

As of yesterday, December 5, Sway’s third location in West Lake Hills is open. Complete with late night hours and a rooftop bar that functions as a private event space and boasts impressive views of downtown Austin, guests can sip cocktails and enjoy savory bites from a condensed food menu. Like the two other spots, the new Sway was designed by architect Michael Hsu, and features communal seating with views of the open kitchen, garden courtyard, bar, and lounge. As West Lake Hills’ first restaurant and bar with late-night hours, the new Sway plans to cater to kids with a menu for the under 21 group featuring mocktails and milk and cookies.

Of course there’s a full beverage program featuring beer, wine, sake and signature cocktails like the Monk Water and Tuk Tuk Sling for the grownups. “We are excited to see the demand and enthusiasm for bringing our Sway concept west of MoPac,” says New Waterloo restaurant group partner and West Lake Hills resident Patrick Jeffers. “With this third location, guests can expect the unique style and exceptional cuisine that Austin has grown to love with some new twists on the Sway dining experience. As a member of the West Lake Hills community, I believe that Sway will be the perfect gathering place for residents to enjoy great food in a beautiful setting without having to go far from home.” This is your friendly reminder that the folks at The Eleanor are all about the Christmas season at their Miracle on 5th street pop-up bar, a return of last year’s iteration … only bigger, boozier, and better than ever. They’ve got longer hours, made a pinky promise to close for fewer private events, and a new bar. Called Shot Ski Lodge, it’s placed atop a ski slope where attendees can sip snowball old fashioneds, naughty and nice shots, and, for groups unafraid of going down a slippery slope, full-sized shot skis. We’re assuming that involves a bottle of peppermint schnapps and a swift push down the slope, but we suggest you find out for yourselves.

In addition to the chalkboard menu of Christmas-inspired cocktails and shots, a full cocktail menu will be available at the main bar, styled to look like a nostalgic Christmas kitsch-cluttered 1980s-style living room. A cool $100 gets you in for the full run. It’s $25 for the night, or if you’re a real scrooge, you can skip to the front of the line with a Dasher Pass to down your free Naughty or Nice Shot. Just remember, kids, not every man with a beard is Santa, and you should obtain consent before sitting on any laps.

Through April the fast casual salad restaurant Vinaigrette will be running a celebration of all things brothy called Around the World in Forty Soups, a six month culinary exploration of the many delightful varieties of soup enjoyed by eaters around the world. Intriguingly enough, the soup dispersal this year is designed to follow the early human migratory patterns out of Africa. Every week diners can discover new soups, as Vinaigrette travels though the Pacific Islands, Asia, the Middle East, Europe, and North, Central, and South America before concluding in Scandinavia.

So far they’ve made spicy Ethiopian doro wat stew (close enough to soup, one imagines, that the nice people at Vinaigrette were willing to split the difference), Djiboutian fah-fah, a hearty blend of goat meat braised with green vegetables and chilis, Omani lentil soup (made with dried limes!), Anthony Bourdain's Malaysian laksa, and “India-esque” carrot coriander ginger soup. And this journey even comes with a passport! Pick one up from the folks at the counter, and you’ll get a stamp for each variety of soup you eat, with a chance to earn (presumably soup-related) prizes. Real globetrotting was never as cozy as this!

This holiday season, Twin Liquors is running a special on cocktail combo packs, designed to give as gifts or to give yourself the gift of not having to plan ahead when hosting that obligatory Christmas/Hanukkah/Winter Solstice shindig. Think about the Cinnamon Toast Parfait Cocktail Combo, which comes with Fireball Cinnamon Whiskey and Chila ‘Orchata, or the Fords Spanish Gin & Tonic Combo. Order on their new app to get all stocked up for sipping season. 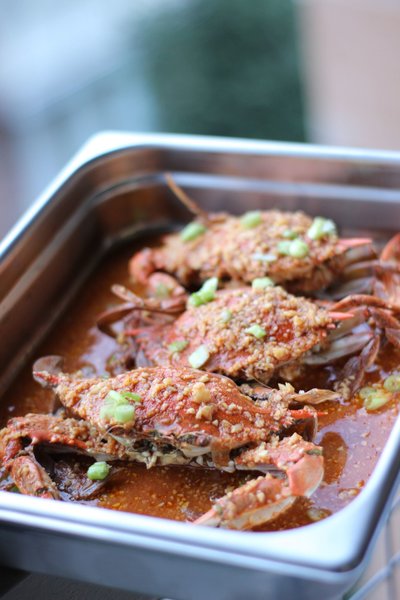 The co-owners, Sean Wen and Andrew Ho, are both UT Austin grads, making their college town a perfect fit for Pinch Boil’s second location. “Being given the opportunity to tell a story about our culture has always been important to us and food just happened to be the vehicle that allowed me to best narrate that story,” says Wen. “We launched Pinch by hosting small crawfish and shrimp boil pop-ups in San Antonio and then in Austin from time to time and the turnout was very humbling. Making our way back to Austin seemed inevitable and we’re thrilled to bring our food, culture, and vibe into the city’s enriching food scene!”

DuMont’s Down Low Bar, a new venture from the group behind Gibson Street Bar, Star Bar, Lavaca Street Bar, Mean Eyed Cat, Lala’s Little Nugget, and The Wheel, opened in the warehouse district a few weeks ago. Housed in the former basement of Fado, which they’ve covered with whiskey barrels from local distillers over the exposed brick walls of the century old building, the space is designed to have an intimate lounge feel, serving up craft beer, specialty cocktails, and more than 70 different kinds of whiskey.