An interview with the PBS star about My American Dream

Beloved chef, author, and PBS television star Lidia Bastianich descended upon our fair city for a few days last week to promote her new memoir, My American Dream: A Life of Love, Family, and Food, and we had the pleasure of speaking with her. Bastianich was the guest of honor at a luncheon honoring women in the culinary world on Thurs., Nov. 8, hosted by two local nonprofits – the Austin Food & Wine Alliance and the Austin Chapter of Les Dames d’Escoffier – to raise money for scholarships culinary grant funding for dynamic Austin culinary projects, with food and wine pairings prepared by Shawn Cirkiel, chef/owner of Parkside Projects. That night, Bastianich cooked alongside chef Fiore Tedesco at his Mueller restaurant, L’Oca d’Oro, for an intimate dinner that’s part of an ongoing Austin Food & Wine Alliance series presented by Whole Foods.

We caught up with Bastianich to talk about her immigrant story, her favorite Thanksgiving family meal (we scored a recipe!), and her advice for women in the food scene.

Austin Chronicle: How are you enjoying Austin so far?

Lidia Bastianich: Very much. I come periodically and I love this city. I have a great set of fans that watch my show so I love coming here!

AC: You can count me among those fans. I just made your meat-stuffed eggplant recipe not long ago and it's fantastic. What inspired you to write this memoir?

LB: You know, I’m a chef and I love what I do, and I have lots of recipes and news to share and restaurants, but I also have an interesting life. I thought maybe people aren't interested in that part of me, but it came to be that when I talk about food and put food in a cultural context, people are more and more interested and want to hear more and more. I was going to do a sort of collection, a memoir, for my grandkids eventually, and I sort of moved it up a little bit. The publisher was very happy, and I'm delighted with it and it's great – people love it.

AC: It's fantastic and your life story puts your work into a new perspective for me. How important is it to celebrate immigrant stories, especially with everything that’s going on in American politics?

LB: Well, you know, I thought that's one of the reasons. Because I'm so grateful to have had the opportunity to become an American, to be in America. Mine is a true American immigrant story. If you give somebody an opportunity and they commit themselves and work hard in America, you can make it happen. I just want to share that with everybody. Yes, we were refugees, and they were counting us, and we had other threats, but once we made it, once we were here, America really embraced us. I just wanted so much to become an American and I was relentless in doing that and really making the most of the opportunity.

AC: The book is also about refugees – those fleeing war and such. Do you think your book can help open the hearts of people who aren't necessarily too sympathetic?

LB: Mine is a real story. I am an immigrant. I went through that. I spent years in refugee camp just waiting. Those were very hard years on a 10-year-old and a family. Ultimately, once we were given that opportunity, the whole world changed for me and my family. Hopefully we have made America proud of this family of immigrants. I cannot be grateful enough.

AC: I think you've made everyone proud. I'm sure your family has read the book. How did the grandkids like it? Was it hard for your mom to go through the stories again?

LB: They were part of it. I would call my mother back and forth and ask her opinion on it – my mother lives with me – so, you know, my grandchildren and children, I took them through the story of my life many times. I didn't want them to forget. I want them to know and really respect and understand the opportunity we had so I took them back to Italy, and back to the part that is now Croatia, back to the camp. I walked them through this life because I want them to appreciate and understand that whatever they get in life, they should do the most with it. So when this came out, I dedicated it to them because they have to carry on this legacy of respect and of immigrants even though they are Americans.

AC: It speaks to your temperament, too. You suffered so much, had so many hardships, and yet you're so positive and your words are filled with hope. How do you do that? 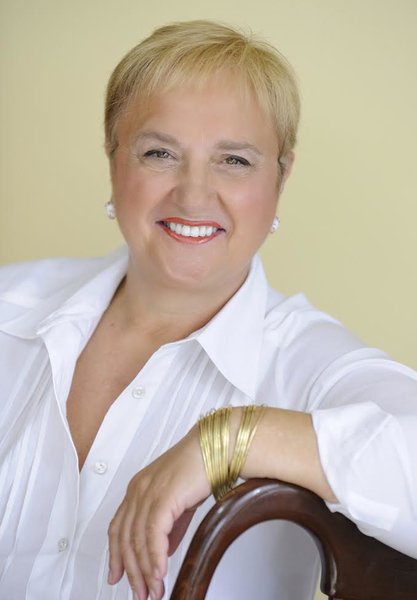 LB: As I look back, I really don't have any regrets. Maybe because it’s ended positively, and maybe because I have so many blessings – I’m so blessed I couldn't ask for anything more. I have my family and my success, so I have nothing to be bitter about. In retrospect, I think maybe those experiences made me who I am, gave me the strength, and I can share that with other people.

You know, if you stay strong, if you stay committed, if you stay truthful, if you have faith, things do turn around and you do overcome hard situations. You must look toward the bright side all the time. I must say, my mother – she's 98 – for her it was the hardest: You go into the world with two young children, 10 and 12, and you don't speak the language, and you don't know anybody – we had nobody in America – you don't have a home. Once I had my kids, and my family, I thought about my mother. My God. And she is so positive even until this day. I guess, you know, it's something we have to really take ahold of. Be positive; you can't think negative. You have to think how you can go ahead and use the opportunity, and then when you're in the position, give help to somebody. Return it. That's kind of guided my life, but I think at the end, I think because the ending is good, I have nothing to regret even though I went through these turbulent times in my life.

AC: That’s beautiful. A lighter question: What’s your favorite meal to cook for Thanksgiving for your family?

LB: On Thanksgiving, we really celebrate America. That’s one day as an immigrant family that we really use it to thank and celebrate America. My kids are Americans, so we’ll have the turkey and we’ll have the cranberry and the sweet potatoes. And then we do make a little bit of Italian. I make an antipasto, I make tortellini en brodo, but you know, when that turkey comes out, I do glaze it with balsamic vinegar. It's a beautiful turkey. It’s a thank you and a recognition of Americans with all of our hearts from our family.

AC: I'm making my first turkey this year, so maybe I'll make it your way.

LB: Oh, it's delicious! Do the whole thing, whatever you do [to the turkey], and then at the end, the last half hour, add your balsamic. Don't use your really good balsamic, you want to use the commercial balsamic, and add cloves or whatever herbs you like, reduce it to about half, like molasses. Brush it on, and be sure to brush it in the leg junctures and all over, and put it in for the last half hour and it will get nice and dark, a mahogany color. It’s so good.

AC: Sounds delicious! Your event benefit[ted] Austin Food & Wine Alliance and the Austin Chapter of Les Dames d’Escoffier. What is the importance of women’s voices in the food scene and women being able to do what you've done – create successful careers? Especially since cooking has largely been something women had to do and now we get to celebrate doing it.

LB: Right. Exactly. Well, I think these organizations are great. I’m a member of Les Dames for over 25 years, and I am one of the founders of the Women Chefs and Restaurateurs. I just believe that as women we have an equal role. Certainly, the kitchen was our domain and in Italian cooking there was always a woman in the kitchen, so I don't see why we should've been phased out by males. But that doesn't phase me, you know. At the lunch[eon] I said, be the best professional you can be. Forget the gender thing. You wanna be in the kitchen, you wanna be a chef, make sure that you're the best, and trust in yourself to be the best, and go out there and that will prove itself. You'll have earned your position. And especially with the world the way it is, respect everybody and demand respect.