Concrete Blonde's Johnette Napolitano wrote a song about it

Look, theoretically we all like to keep things a little spooky this time of year. It’s rainy, the days are getting shorter, and some of us have already eaten the first batch of Halloween candy we bought in anticipation of trick-or-treaters. 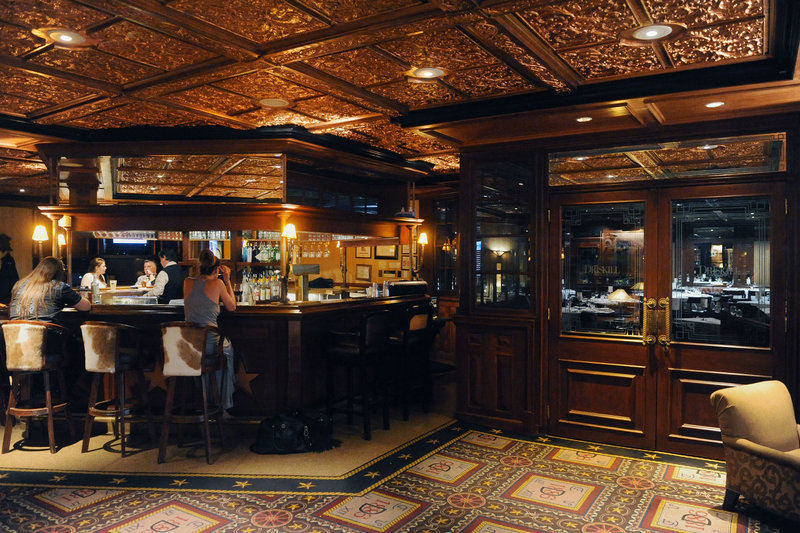 But, you guys? Ghosts are scary! And for the wimpier among us who still don’t look into dark mirrors just in case Bloody Mary might be lurking inside, and who maybe watch Scooby Doo with our hands clinched protectively in front of our eyes, well, it can all get a little overwhelming. So we decided to kick off this Halloween season with a visit to the Driskill.

Purportedly the most haunted hotel in Texas (see this week's Snapshot: Ghost Walk Austin), the Driskill is home to three surprisingly companionable ghosts. If you’re a scaredy cat, there are few calmer ways to honor this spooky time of year than cozying up in the Driskill’s bar with all that wood paneling and Texas ephemera and honoring the Casper-like charms of the hotel’s friendly ghosts.

Nighttime visitors to the hotel might encounter the specter of Mrs. Bridges, a hotel employee who allegedly worked the front desk for several years in the early 1900s. As any good hospitality employee knows, dedication and consistency are essential to the job. And Mrs. Bridges apparently took her work at the Driskill so seriously that visitors still sometimes catch a glimpse of her walking from the vault out into the middle of the lobby, the site of the old front desk, dressed in a Victorian-style dress. Her appearance is apparently often marked by the smell of roses, as Mrs. Bridges, a lover of flowers during her time on Earth, seems to fuss over the places where flower arrangements would have been located back in her day. You could honor her spirit with a glass of rosé. But we think Mrs. Bridges would be a fan of the Bluebonnet, a floral blend of vodka, elderflower liqueur, and crème de violette, a violet-flavored spirit reminiscent of the popular violet candies Mrs. Bridges might have snacked on back in the early 20th century.

While invisible flower arranging is nice and all, if you’re looking for a ghost who’s really going to get to work for you, look no further than Annie Lennox. Yep, the sylphlike former Eurythmics member apparently has a personal history with the ghosts of the Driskill. The story goes that Annie was in town on tour and couldn’t decide what to wear on stage that night. She laid her two top favorite dresses out on the bed before showering, and when she returned, one of the dresses had been put away, one of the Driskill ghosts apparently having decided to appoint themselves stylist for the evening. Apparently the story achieved such notoriety that Concrete Blonde’s lead singer Johnette Napolitano was inspired to write the song “Ghost of a Texas Ladies Man” about the encounter. And what better way to honor this decisive spirit than with a glass of Sage Advice – a blend of gin, pineapple juice, elderflower liqueur, and muddled sage guaranteed to help you make more daring seasonal fashion decisions.

And then there’s the ghost that started it all, the lingering spirit of Colonel Jesse Driskill, for whom the hotel is named. Driskill built the hotel at a purported cost of $400,000, about $6 million in 2018 money. People said he was foolish to spend that much money on a hotel in what was then something of a one-horse town, and while we’d love for this to be the story of a triumphant return, unfortunately the Colonel proved them right. After bankrupting the hotel, he lost it entirely making a bad bet in a high stakes poker game.

When he died, three years later, some said it was from the heartbreak of losing his beloved creation. But Colonel Driskill may have gotten the last laugh. Not only does the hotel bear his name, but it’s also said that his spirit still frequents the grounds, making his presence known by the scent of his cigar smoke. And what drink better honors the spirit of an old school cigar chomping Texan than a mint julep, blending locally made rum from Treaty Oak with Pimms, ginger beer, muddled mint, and cucumber. Now these kind of spirits we’re okay with.