On Saturday night, a red and black vintage Chevy Bel Air pulled onto Rainey Street and out walked A Guy. The most fervent of the 30 impersonators at the FieriCon pub crawl, he was in uniform, not costume. His hair looked like a frozen hedgehog and he loves Fieri so much that he actually pronounces his last name properly (with a T, as in fee-yeti). 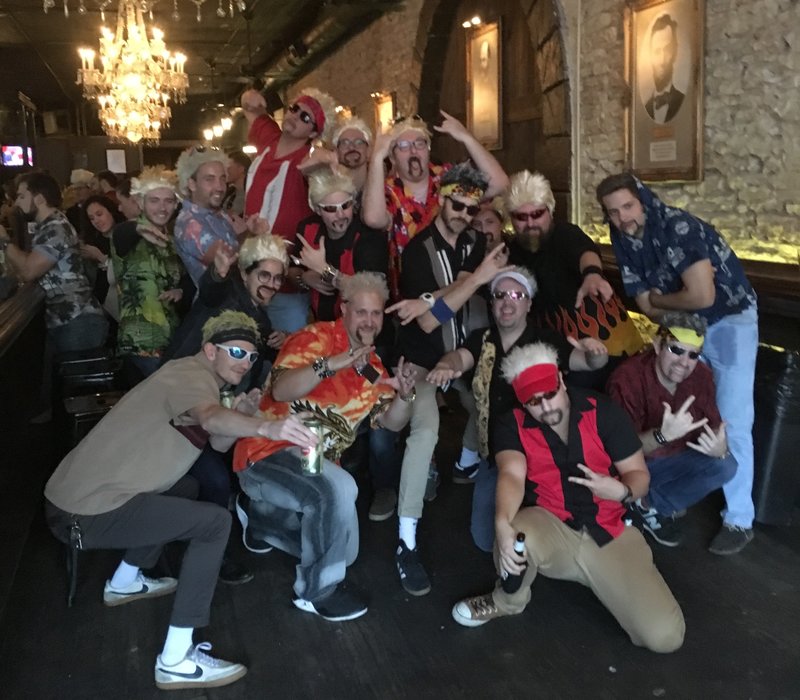 I’m sure you know The Guy. As the host of Food Network’s “Diners, Drive-ins, and Dives” he’s championed hundreds of mom-and-pop restaurants and spawned an empire of more than 60 restaurants. But success has come at the cost of becoming food culture’s biggest meme. Amazon sells a $9 “Celebrity Chef Wig and Goatee Set,” which doesn’t even need to mention him by name. The New York Times review of his restaurant states that the banh mi resembles a Vietnamese sandwich as much as Fieri himself resembles Emily Dickinson.

It’s hard not to dunk on Fieri, what with that goatee that looks like it belongs in a Squirrel Nut Zipper cover band. The first FieriCon pub crawl in New York City last year was in mean spirits and it hurt Fieri’s feelings. I know that because the Austin organizer reached out to his management, who gave approval as long as their love of donkey sauce was sincere.

And I can tell you that it is! The appreciation from Fiericonners was so genuine I feel bad making jokes about Guy’s frosted tips being on break from working the counter at Hot Topic. The organizer and his wife became hooked on “Triple D” after an anniversary getaway to Tarply, TX, population 30, whose only restaurant was featured in the premiere episode of Triple D. The couple liked it so much they plan to return this year.

The crawl started on West Sixth (Star Bar, Kung Fu Saloon) then progressed to Dirty Sixth (Burnsides, Jackalope), and finally ended on Rainey (Bungalow, Container Bar). When I arrived at Burnsides around 5:30pm, I felt like I walked into the physical embodiment of the Smashmouth song “All Star,” which coincidentally played twice along this crawl. The Guys were all there, from a mild-mannered techie who hadn’t even seen the show to a former pitmaster from one of Austin’s best barbecue trailers. Some Guys wore custom T-shirts sold to benefit B.I.G. Love Cancer Care, chosen in memory of Fieri’s late sister.

I tried my best to fit in, but the only Fieri Wear I could find at Texas Thrift was a blue Hawaiian shirt, XL, which a woman in a homemade Welcome to Flavortown shirt said made me look like Guy... if he were normal.

Aside from a few true believers, most Fiericonners were aware that this was ridiculous and just wanted an excuse to drink on a Saturday afternoon. Many invoked a pride in Keeping It Weird. Everyone was pleasant and surprisingly trusting, even after I revealed that I was an undercover writer who’d likely compare Guy’s taste in food to a raccoon’s taste in places to take a shit. The only cringeworthy moment was when a Frat Guy said that if he met Fieri, he’d punch him in the face, out of respect. A minute later, a second Frat Guy stuck a wig in his pants. Oh, someone also made a joke about a Flavortown tramp stamp.

Fiericon didn’t include any Guy-endorsed restaurants, just bars, which was strange since Casino El Camino was along the route. I asked the organizer why we weren’t stopping for a burger and he said there’s no way that bar would welcome an army of goofy Guys, even though their business had benefited greatly from the show.

That’s when I started to question the joke I planned to make about how Fieri looks like the Stay Puft Marshmallow Man fell asleep in a tanning bed. Sure, he has horrendous style, called the Noble Pig sandwich a “pork three-way,” and the chicken fingers at his restaurant supposedly taste like chewy air, but does that make him evil? Who’s the real jerk here – the gaudy celebrity chef or the writer making fun of his haircut?

He may be a douchebag, but to quote one Guy, at least Fieri is America’s douchebag. He loudly champions our humblest flavors and rewards the most needy entrepreneurs. Another Guy took it even further: Fieri is America. He’s a nationalist who doesn’t think beyond where he’s at that moment. That diner is the best diner ANYWHERE. There has never been another Frito pie like this Frito pie and he is going to scream about it from a mountaintop capped with what looks like donkey sauce.

But am I so different from him? I’ve never made a bestiality reference about a sandwich, but I’ve certainly come close. I’ve praised a Frito pie as revolutionary for the sole reason that it’s served in the bag. I’ve even written about some of the same restaurants, for the very same employer.

Questioning what exactly it means to be a Normal Guy, I high-fived one last Fiericonner on my way out of Container Bar and headed to Via 313 to treat myself to a Detroiter. Three slices deep into that minefield of pepperonis, wearing a goatee of tomato sauce, I stared into the gooey abyss of the final slice and felt like I was eating the very best pizza in the world. And that’s when I realized that I had finally arrived in Flavortown.