A Lover's Guide to Food During ACL Festival

Since that fateful day in October of 1947, when a young Willie Nelson strapped on a guitar and stepped into the national spotlight, Austin City Limits has been a mainstay of the Austin music scene.

And in 2002, when the music series went live with the ACL Music Festival, fans have been flocking to Zilker Park for a weekend of live music and overpriced snacks. (Slightly) chiller than SXSW, ACL is a chance for hometown heroes to share stage space with touring acts with a national fanbase. And this year is bigger than ever, with headliners like Paul McCartney and Travis Scott. The ticket practically pays for itself with a chance to imagine those two hanging out in the greenroom, right? The only question now is how to keep yourself fed through a weekend of constant dancing and legendary Instagram stories. 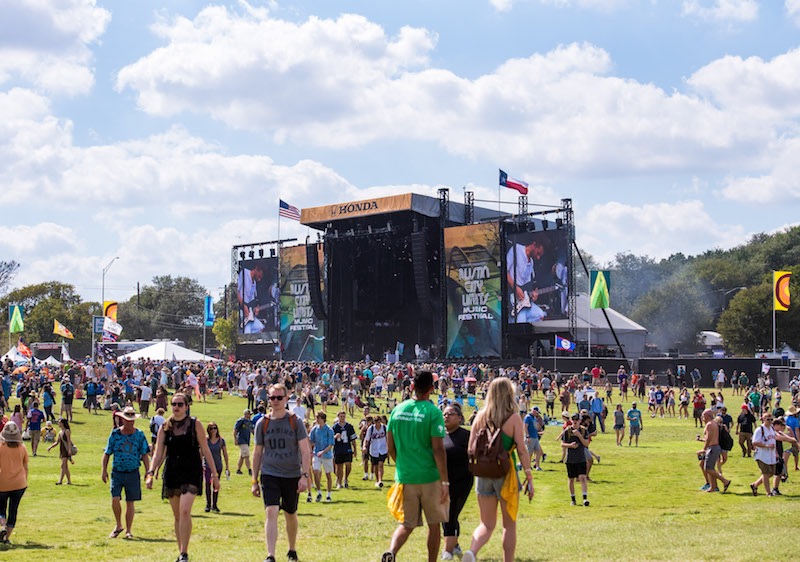 Lunch: It’s the first day, you snuck out of work early, and you’re wandering through Zilker Park deciding which stage to hit up first. This calls for french fries, specifically the kimchi fries from Chi'lantro, the perfect slightly messy snack for strolling. (Check out our guide to the entire ACL Eats vendor list.) Dinner: You’re having so much fun you don’t want to leave! The constant lines at the concession stands haven’t scared you off yet, with your high energy level and moderate tipsiness. Fortunately for you, Micklethwait is here to provide the perfect cushion for a night of overindulgence in the form of a three meat plate with jalapeno grits and lemon poppy slaw on the side. Yeah, it’s not the most portable food, but if you’re here to rock, you gotta lay down a good foundation.

Breakfast: We suspect you’ll need to recover from last night, so it’s a good thing the shows at ACL don’t kick off until 11am. Kick off the weekend with a protein-heavy smoothie from the Juiceland right outside the entrance to Zilker. Bright-eyed and bushy-tailed, you can sip on a Moontower, thick and sweet with dates, bananas, and brown rice protein powder as you stroll through the park and wait for the music to begin. Lunch: By now, you’re probably thoroughly sick of your little square of park, so take a break and walk over to Tacos el Quetzal for a taste of how the real Austin eats. Their el pastor is flawless – sweet, smoky, with a little acidic pineapple punch – and the queso isn’t half bad either. Plus, they make their own tortillas, which are substantial enough to hold in one hand as you walk back to the park. Dinner: It’s late, the music is winding down, they’re kicking you out, and you’re STARVING. What’s a rock star to do? Well, you could do worse than to walk on down to P. Terry’s, where they’ll make you a solid veggie burger and an excellent milkshake until one in the goddamn morning. Brave the inevitable late night lines, and get your meatless burger topped with bacon, a surprisingly delicious combination I like to call “The Hypocrite.” A possible late-night meal at Bouldin Creek Cafe. Might want to lay off the coffee though. (Photo by John Anderson)

Breakfast: That’s two nights out that you need to recover from, so a smoothie isn’t gonna cut it. Instead, get yourself in a civilized mood with brunch at Juliet, where they can provide you with both hair of the dog – in the form of a delightful Bloody Mary – and one of the finest breakfast sandwiches within walking distance. Lunch: You’re staying in the park for this one, pal. It’s been a long day, yes, but if you’re going to catch a set from the very buzzy Amen Dunes you’ll have to be parked at the front of the stage, Flyrite spicy chicken sandwich in one hand, tater tots in the other. Dinner: It’s been three days of booze, grease, dehydration, and bumming cigarettes, and your body is crying out for vegetables. Normally we’d recommend the delightful macrobiotic oasis Casa de la Luz, but if you’re trying to catch Travis Scott, make the trek to open-til-midnight vegetarian fan-favorite Bouldin Creek Cafe to end your weekend of indulgence with a tofu scramble.