Austin loves bourbon. You can’t swing a brisket without hitting a whiskey bar, and the combination of well whiskey and a Lone Star is held sacrosanct for every UT student, struggling artist, and nostalgic grownup. It’s fitting, then, that Bulleit Bourbon should pick our city to be one of only four markets to have a custom creation by a local tattoo artist. 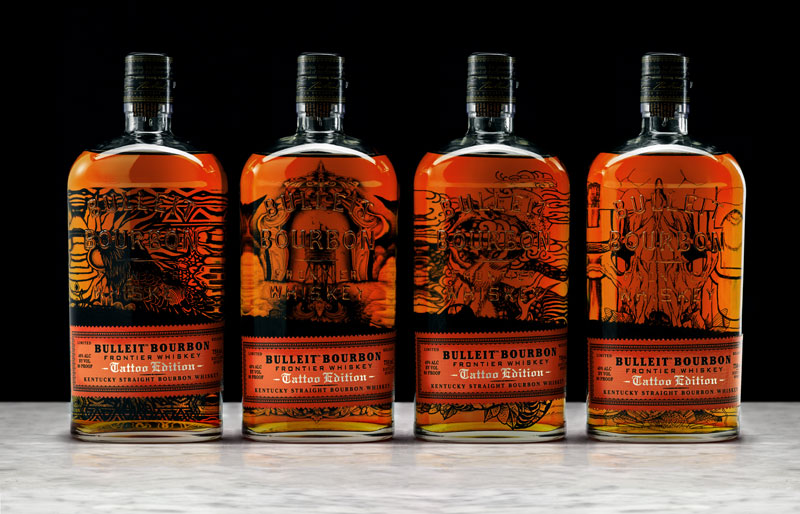 This redesign marks the first time the iconic Bulleit Bourbon bottle has been altered since the whiskey’s introduction to the American public in 1987. Austinites will now be able to pick up limited-edition Frontier Works bottles with labels designed by Thomas Hooper, an artist based at Rock of Ages Tattooing. Along with the one-of-a-kind label, Frontier Works bottles will feature an attached scannable QR code, enabling drinkers to access an interactive augmented reality experience which promises to bring Hooper’s design to life.

Hooper’s distinct style, drawing from Indonesian, Australasian, Japanese, tribal and Tibetan art, is inspired by the people of Austin in his work and how they make the city what it is. “My work draws its influences from many things the sanctum of nature and natural forms,” explains Hooper in his Rock of Ages website bio. “The unconscious, mathematical and geometric patterns, cosmology, and Eastern religious images. I try to incorporate these ideas into intricate patterns and iconic folk symbolism using complex pointillism, repetition, and detailed line-work with the hopes of creating a vernacular that is both meditative and pure in form.” 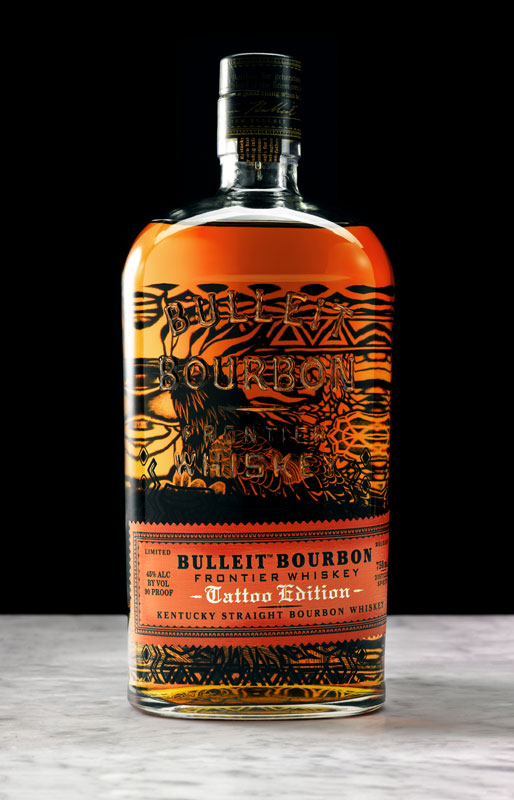 With the Frontier Works bottle, Hooper was given the task of capturing not just the individual psyche of his clients, but the collective unconscious of the city of Austin, a task he approached with a focus on the eclecticism and timelessness that characterizes his work, which is highly detailed and complex, giving his designs a dreamlike quality that can be mesmerizing as you watch them shift and ripple across living skin.

This is a difficult effect to re-create on a still glass bottle, but Hooper accomplishes it with a design whose repeated pattern of wavy black lines makes it appear to shift and reorganize itself through the dark liquid of the whiskey. The interlocking mandalas that appear at the bottom of the bottle open up as you reach the top, until they look like flowers, the wings of a grackle. There’s an eerie feeling to this design that reminded me of night-swimming in Barton Springs, the whispery feeling of those river weeds on your feet and the light of the full moon above. With this design, Hooper has captured a piece of Austin’s essence in a unique (and uniquely quaffable) way.

And we’re not the only whiskey drinkers who feel that way. “These artists are some of the most talented people I’ve ever met,” said Ed Bello, brand director for Bulleit. “It’s an honor to work with people who share our passion for pushing boundaries on the frontier with such creativity, and to feature their art on our Bulleit Bourbon bottles. Let’s raise a glass to tattoo culture, style and the artists that bring it to life every day through their passion and dedication to ink.” And thanks to Hooper’s inspired design, let’s raise a glass to my favorite whiskeytown.

The new Bulleit Bourbon Tattoo Edition collection hit shelves nationwide this week, and the bottles are also available to purchase at www.reservebar.com.