Cool Off With Cocktails at the Movies

There truly is no greater summertime activity than watching a movie in a fully darkened theater. Think about it: you’ve got air conditioning, popcorn, and the surreal experience of staggering out into the full sunlight once the film’s over. And after the movie, of course, there’s the endless dissection of the plot details and pacing over drinks.

Really, the only way it could get better is if those post-drink chats were thematically linked to the film itself, and now, with our handy dandy summertime guide, they can be! Jaws on the Water – The Open Water at Whistler's

You should probably stop off at Whistlers before ridesharing to Jaws, because the experience of floating on dark water while watching a film that ruined swimming for an entire generation sounds like it might require a little liquid courage. Get it in a highly sophisticated and thematically appropriate form with Whistler’s JAWS themed Open Water – a refreshing mixture of rum, blanc vermouth, blue curacao, lime cucumber mint cordial, soda, and, um, impending doom.

There’s a lot that needs unpacking in Alejandro Jodorowsky's infamously gorgeous and convoluted surrealist fantasia that takes its tarot-inspired characters through technicolor alchemical transformations, so you should probably commit to a whole post film flight at this delightful rooftop mezcaleria.

2001: A Space Odyssey at Bullock Museum – The Raw Dill at Academia

For most of us, summer trips to the IMAX theater will forever be associated with 3D depictions of undersea life lunging at our fourth grade faces in full Dolby surround sound, but this year the folks at the Bullock are taking it to the next level with a showing of Stanley Kubrick's 1968 masterpiece. Why not discuss your pet theories about the obelisk over an equally surreal cocktail at Academia, which attempts to reproduce the experience of eating a bagel and lox in liquid form, complete with salty salmon eggs and dill.

The Violet Crown is essentially the Quentin Tarantino of Austin bars, with their commitment to classic movies on the bar televisions, 1970s hits on the jukebox, and an affordable space for weirdos to kick back in the shiny vinyl booths and be their weirdo selves. Plus, the delightful Orange Whip shares some of the mystique of that briefcase, and deliciously replicates its yellow glow in sippable form. And it doesn't get more summertime than the Paramount's Classic Summer Film Series. 10 Things I Hate About You at Martin Fields – Homemade Zima

You just know that in 2018, Julia Stiles’ badass feminist baby would be all grown up, super into Twitter, and probably recreating the flavors of her misspent youth with the recipe for homemade Zima they posted on their weirdly meme-forward Facebook fan page earlier this year. A surprisingly refreshing blend of vodka, Calpico soda, and various citrus juice, it might just taste better than the real deal. Julia would be proud. 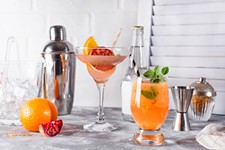 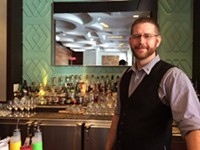