Ice Cream of Genius (with the Light Brown Caramel)

Forgive us, Stephen Foster, but we like Lick lots

My friend Julie Holden makes some damned good ice cream, tell you what. Regular flavors, the woman’s a wizard. Slightly unusual, she handles it like a boss. Beyond that, she even accepted my challenge to make wasabi ice cream and Sriracha ice cream – and rendered nothing less than creamy, delicious perfection. 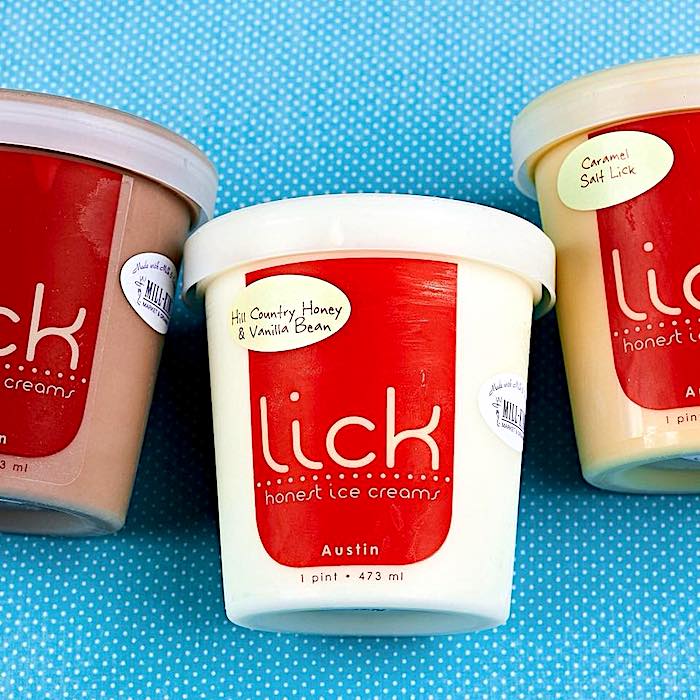 So, my point is, Julie is real good at making ice cream, yes – but she’s no Anthony Sobotik.

What, you don’t know that name? Anthony Sobotik?

He’s only one of the founders of Austin’s Lick Honest Ice Creams, that’s all.

Yeah: Those guys. That ice cream. The kind of locally sourced and scrupulously produced confection you might French kiss a cactus for, because just the taste of your reward would more than compensate for the lacerations.

But let’s not be stupid: No need to swap spit with a saguaro for a taste of Lick. Just go to any of the Austin locations and plunk down sufficient ducats and enjoy, right? Even the Mueller development – which seems to have almost everything else that’s worth having in Austin, besides – which is pretty fucking annoying to those of us who must live in other, less favored neighborhoods – even that rare example of urban-planning success has a Lick.

Better yet, though? Take a make-your-own-ice-cream class at Central Market Cooking School with Anthony Sobotik. Because that’s some next-level gustatory and educational pleasure right there, citizen.

(Yes, Central Market Cooking School. Yes, we’ve written about it before. We’ve even done a long interview with the venue’s knife expert, that Cindy Haenel. And I’m here to let you know that of course it’s still a thing, that cooking school: It’s been around for more than two decades; it’s not going anywhere soon; and there are, as ever, an abundance of different classes every single week of the year.)

Or, because the Lick team tends to do a Central Market class just once a year (last night’s iteration, led by the farm-raised Texas native Sobotik and his ex-Pennsylvanian partner Chad Palmatier, featured Cilantro/Lime and Sweet Corn ice creams, with a strawberry cobbler bonus), maybe catch them at a teaching gig in some other venue throughout the year. Hook up with one of their social media accounts for announcements – and don’t forget to stop by the nearest Lick outlet for a pint of, say, that excellent Caramel Salt Lick of theirs.