The Texas Whiskey Festival Is This Saturday 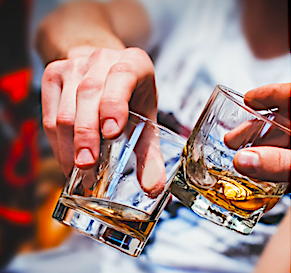 “We’ve got 11 Texas distilleries representing 25 different whiskeys,” says Jake Clements, head honcho of this celebration of what liquid miracles can be wrought with fermented grains and expert craft. “Still Austin’s the only one from inside Austin’s city limits, but, in the general area, we’ve got Garrison Brothers out of Hye, Treaty Oak and 1876 Bourbon out of Dripping Springs, Andalusia and Ben Milam out of Blanco, and Balcones out of Waco. And then there’s Yellow Rose out of Houston and Ironroot out of Denison. Austonian Spirits is here in Austin, too, but they’re not distilling it here, they have their own process that ages whiskey. And – ”

And there are others – check the Texas Whiskey Festival website for the whole list, right? – and all of them will be set up around the Museum’s cathedraline interior, offering a deliciously diverse array of tastes and product samples and deep information and whiskey-lovin’ camaraderie … followed with a live concert by Ray Benson and Asleep at the Wheel.


And here’s where to get whatever tickets remain for this marvelous evening.


But there are two more things to note here, before we let you get back to the rest of the Chronicle – or checking Facebook or MetaFilter or whatever:

1) Yes, it does seem a bit odd, at least at first, that this particular event is happening where it is. So we ask Clements how the choice of venue for the Texas Whiskey Festival came about.

“It took some talking,” he tells us. “We looked at a lot of locations – in Austin, in San Antonio – a lot of event venues. And they were either too small or way too expensive for our budget. And we wanted to do something unique, and the Texas State History Museum – there’s nothing more Texas than that. So we set up a meeting, and they were like, ‘Well, sure, we can – wait, what kind of thing is this again? Whiskey? OK, we’re gonna need to put some restrictions in place.’ And we worked through some things, and ever since then we’ve been good to go.”

So the Festival can dispense spirits for only two hours – from 7-9pm, specifically – which should be more than sufficient for everyone to get a taste of all that’s available – and then Asleep at the Wheel takes the stage.

2) When we said that “deep information” is part of this shindig’s attraction, friend, we weren’t just spiking the linguistic punch.

“We chose to do the concert after the tastings,” says Clements, “so that the music isn’t interfering with the conversations. Because the whole idea of this is educating people about the Texas whiskeys that are available, about talking to the people responsible for that. I did Whiskeys of the World, I’ve done other events, and I didn’t get to talk to anybody about any of it. At those other events, most of the owners and distillers weren’t even there – it was company sales reps who didn’t, well, what they knew was the bullet talking-points that they were given – and, as a whiskey enthusiast, I didn’t like that. On Saturday, the owners will be there, and they’ll probably be bringing their head distillers plus their brand ambassadors.”

So this event is pretty much the opposite of, ah, Big Whiskey?

“These are all Texas-owned companies,” says Clements, proudly distilling that point further, “it’s not just big conglomerates sending sales reps. So the people behind the whiskeys are gonna be there. And that was my ultimate vision for this Festival: I wanted people to be able to learn and taste.”

“That’s part of what we loved about Jake’s concept,” says Lisa Braunberg of Still Austin, sitting with the company’s other owners – and Clements, and your whiskey-sippin’ journo – in their distillery’s elegant tasting room in The Yard off St. Elmo Road. “We get to educate people," says Braunberg, "talk about our products, let them know how we’re doing and what’s different about us. And then we also get to taste all of these other great whiskeys that are gonna be there.”

And Still Austin itself? The first whiskey distillery within city limits since Prohibition? Yeah, we’ll be telling you more about them in a later post. Because what those good people have going on, and the context in which it occurs, is worthy of a whole ’nother article.

In the meantime … reckon we’ll see you ’round the Bob Bullock, samples in hand, this Saturday night!