Virginia Wood, Champion of the Austin Food Community, Dies at 67

Our colleague and friend will be greatly missed 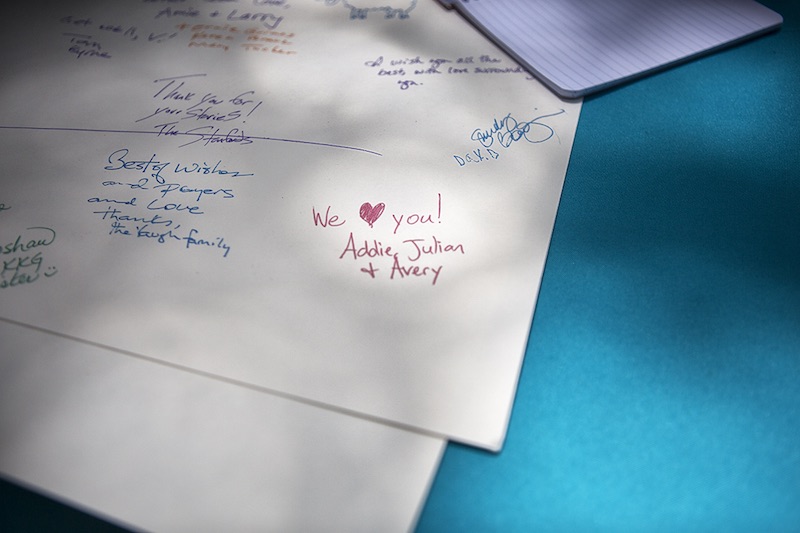 Well-wishers sign a card for Virginia B. Wood at last summer's Batter Up! Fundraiser for Wood's medical bills.

Wood pioneered food news reporting in Austin. Her column, Food-O-File, chronicled the latest in chef changes, restaurant openings, shuttered food businesses, and up-and-coming artisan foodmakers, from 1995 until 2014. Widely regarded as one of the first journalists to cover the burgeoning farm-to-table movement, Wood’s column also acted as a bulletin board announcing businesses and food industry folks that needed, and deserved, attention. When information about a food business made it into her column, Austin paid attention. Many local star chefs, including Jesse Griffiths, Aaron Franklin, and Callie Speer, were first written about by Wood. Her restaurant reviews were detailed and fair, and her institutional knowledge is regarded as a foundation for what has become a nationally recognized food scene.

A talented baker who trained on the line in the Fonda San Miguel kitchen (she spoke fluent Spanish), Wood proudly co-wrote the text for Fonda San Miguel: Thirty Years of Food and Art, published in 2005. She also operated a local wholesale catering business, At Home on the Range, providing desserts for hundreds of weddings, holiday parties, and benefits, in addition to selling her treats to local restaurants for many years. Les Dames d’Escoffier made Wood an honorary dame in 2016, the same year she officially retired from the Chronicle. The Virginia B. Wood Hall of Fame was also created that year to honor cherished restaurants in our annual First Plates issue.

In July 2017, Wood’s successor, former Chronicle food editor Brandon Watson, along with industry colleagues from Austin Food & Wine Alliance and Les Dames d’Escoffier Austin, coordinated a bake sale benefit to supplement Wood’s ongoing medical care. Batter Up! for Virginia turned into a who’s who of the local culinary community, with more than 30 well-known chefs and restaurant teams coming together to show their support for the woman who helped launch many of their culinary careers. David Norman of Easy Tiger and Aaron Franklin of Franklin Barbecue created brisket kolaches that sold out in under one minute, and the event raised more than $7,000.

On a personal note, Wood assigned me my first story at the Chronicle, in 2008, and she continued to share her encyclopedic food knowledge – and wild stories – with me for almost a decade to come. Bold and brilliant, her mentorship in journalism and her pro tips on navigating food culture shaped my writing and my career path. Both my mentor and my friend – and a fellow “West Texas gal” – Virginia will be greatly missed.

We will update this post when the details of memorial services are announced.