The Soup Peddler Yellow-Bikes Its Way to 16 Years

In most growing cities, the beloved funk is too often replaced by the corporate fake. Talk to anyone in this town who’s still crying over the lack of Les Amis and Liberty Lunch, for instance, and they’ll tell you that it’s true, it’s so sadly fucking true, of Austin.

But it ain’t all gray skies, citizen. 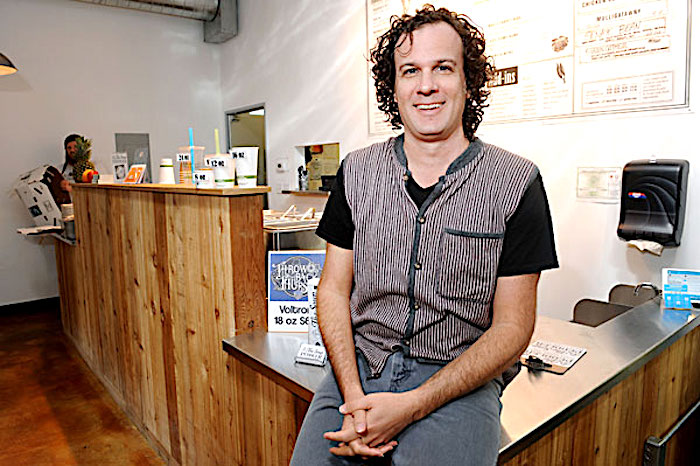 Remember the Einstein Bros. Bagels that used to be at 12th & South Lamar? Decent noms, there, for all that it was part of a vast chain (with impeccable graphic identity) outta the Big Apple.

And it still is part of a vast chain from NYC, of course – but not in that location. Nope.

Austin, Texas: Where nationwide corporations can still be replaced by hometown heroes.

Austin, Texas: Where the former Einstein Bros. Bagels at 12th & Lamar has become another outpost of The Soup Peddler.

I should’ve noticed this earlier, but only caught sight of the change while on my way to the Alamo South Lamar for a party celebrating The Soup Peddler’s 16th anniversary. David Ansel, the Soup Peddler himself, was on hand with a screening of Lisa Kaselak’s 2005 documentary about his then-nascent business – and with gallons upon gallons of duck soup (and a complementary meatless gumbo for the vegans) to accompany the Marx Brothers’ classic Duck Soup.

By way of properly commemorating the event, Ansel told the crowd, he’d transported the soup himself – on his trusty old bike, all the way from the Peddler kitchen. Just like he’d started out doing 16 years ago, when he was still making all the soups and deliveries himself.

Indeed: That bike of Ansel’s, by now in its original state only like the proverbial Ship of Theseus, started out as a component of Austin’s Yellow Bike Project – that local nonprofit that takes old two-wheelers and refurbishes them and sets them out for use all over the city. And the proceeds from the Soup Peddler’s 16th Anniversary Party? Went back into the Yellow Bike Project.

And, traveling back up north after the party, I again scoped that former-Einstein’s-now-Soup-Peddler outpost going by on my left … while, on my right, the familiar sight of the Tavern approached.

Yeah, that one: Been there on the corner forever. For at least the 30 years I’ve been roaming these ATX streets, anyway.

Well, come to find out a couple of days ago, the Tavern’s been sold.

But, no, listen: It wasn’t bought by some out-of-state megacorporation that's gonna turn it into condos. It was bought – and is going to be respectfully upgraded – by Shannon Sedwick and Michael Shelton.

Kind of thing makes a person wanna treat themself to a fine smoothie or a big brothy bowl for lunch – at any of the five Soup Peddler locations in this growing city.