“Gotta be some mistake,” you think to yourself as you enter the brightly lit classroom upstairs at Central Market on North Lamar. “Gotta be some mistake,” you think, getting an eyeful of the big guy in chef’s whites behind the video-camera’d cooking line, “that can’t be Maffei. That’s gotta be, like, some linebacker escaped from a nearby gridiron.” 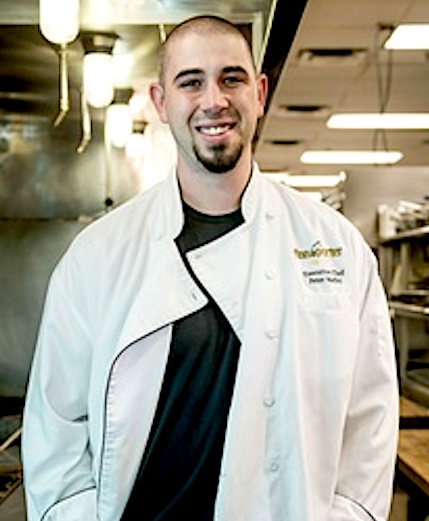 Man's got mad kitchen skills … and he'll teach them to you. (Photo courtesy of Central Market)

As if, what, only small people can be culinary wizards? As if Julia Child, in her prime, couldn’t have run good defense for the New York Jets?

So you tell yourself to shut up and grab a chair among the other people already sitting at the rows of tables. The other people, a diversity of ages if not of colors (the room’s white AF, actually), reading through the thin sheaf of papers waiting atop each place setting, or up and helping themselves to the prefatory goodness of the coffee and tea station on one side of the long, professionally appointed rectangle of a room.

The sheaf of papers: Precise recipes for the night’s meal’s courses; the most recent flyer of Central Market sales specials; a customer survey.

What you’re there for in the first place: Chef Peter Maffei, a popular teacher at the Central Market Cooking School, which program you haven’t reported on since that crossover they did with the Ransom Center, this Chef Maffei, this titan of a NYC-born-and-raised culinarista, he’s going to teach you and the night’s other students how to make Beef Wellington and some fine accompaniments. And you’re going to get to eat all of it. And each course will be paired with a different wine.

Well, you don’t care much about wine, tbh, but you do have a definite jones for Beef Wellington, haven’t had that carnivore’s phenomenon since that one dinner with your babymama at The Bakehouse on Manchaca more’n two decades ago. And this Maffei is from the Big Apple, and your own sainted mother was born in Brooklyn, and you live in Pflugerville these days – and Maffei is the executive chef and head honcho of culinary operations for the new Courtyard Marriott up there in the pfar north of Austin …

So it all makes perfect sense.

And the further you go into the class, the more perfect that sense gets.

Yes, I know “perfect” is an absolute. But still.

[You, reading this report. You, who’s maybe not just Maffei himself, nor the Central Market team, nor the publicist for any or all of them, but one of the thousands who scope the Austin Chronicle online each day. You, citizen: Did you already know about the steady, almost relentless offerings of the Cooking School? Or were you not aware, until right about now, that that bustling paradise of grocery shopping near 38th & Lamar, that giant H-E-B gone upscale and international and hyper-artisanal – were you not aware that they have a continuing schedule of classes, from a variety of excellent cooks and/or celebrity chefs, that will teach you about all manner of meals and types of food and methods of cooking and even matters of aesthetic presentation?

Well, they do. And, the thing is, you get the lessons (which are sometimes just you watching & listening & eating, but are also, sometimes, hands-on experience) and the noms for little more than it would cost you to dine on the same thing at a fine establishment somewhere in the city. Like, when it’s a Beef Wellington – which was, ohsweetbabyjesus, such a succulent and tender dish, the pastry shell swaddling that gently pink & spice-encrusted tenderloin – preceded by 1) Beet-Cured Salmon in Horseradish Creme Fraiche and 2) Roasted Butternut Squash Soup, and followed by a dessert of 3) Chocolate-and-Nutella Bread Pudding, and accompanied by those (4) different types of wine.]

So, yeah, this Chef Peter Maffei, who previously ran the Hilton's Cannon + Belle excellence and is now gastromancer numero uno at Pflugerville’s Marriott. No wonder Maffei’s popular at the cooking school. He’s got it down: the informative yet casual teaching style, that NYC-steeped personality shining through his join-the-club allergy to Texas cedar, the wealth of asides (technical, personal) that provide students with tips and hints toward better cooking in general – all while he’s blending or spicing or sizzling the subjects at hand and the kitchen team is expertly dishing up what’s been prepped earlier and passing out the food-laden plates and filling up those glasses with wine …

Don’t be silly. Of course Maffei’s not a linebacker. That job, no matter one’s basic physical parameters, takes a whole lot of a different sort of training. But, listen: Whichever team loses the Super Bowl this year? Whichever team just doesn’t have what it takes to defeat their opponents on that contentious field of champions?

If they’d been eating food cooked by Peter Maffei, they might’ve had a better chance.

Central Market Cooking School, cooking classes, Chef Peter Maffei, Beef Wellington, culinary events in Austin, learn to cook, nothing about the Super Bowl, actually, nor anything about a superb owl