Bar manager claims she was "forcibly kissed" on the mouth

Drink.Well bar manager Becca Yannone alleges bar owner Michael Sanders sexually assaulted her. In an Aug. 17 Facebook post set for public viewing, Yannone claims Sanders “forcibly kissed” her on the mouth against her wishes. The incident led to the resignation of Yannone and three other staff members, who quit in solidarity. 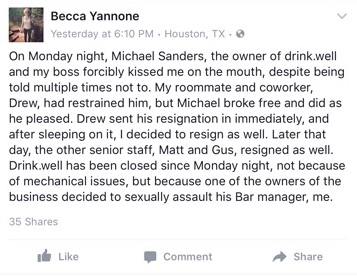 On Aug. 16, the Drink.Well Facebook site indicated the North Loop bar “will be temporarily closed” through Sept. 5, with the only reason for the closure stated as “sometimes, we all need to take a break in order to give our best self to others.” Sanders and wife Jessica opened the neighborhood craft cocktail bar in 2012. Read the entire post from the Drink.Well Facebook page below.

Yannone claims the bar shuttered on Monday squarely because of the alleged sexual assault. “Drink.Well has been closed since Monday night, not because of mechanical issues, but because one of the owners of the business decided to sexually assault his bar manager, me,” writes Yannone.

The Chronicle has reached out to Yannone and a press representative for Sanders.

Sanders was scheduled to be a judge for this weekend's Austin Chronicle Hot Sauce Festival, but dropped out of participating in the event on Aug. 17. 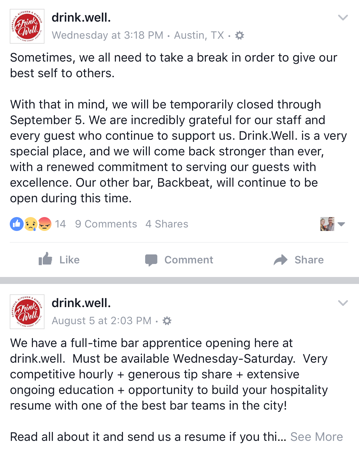 UPDATE: The investors of Backbeat, the South Lamar sophomore cocktail bar from the Sanders, have issued a statement regarding the incident.

"Effective immediately, Backbeat has parted ways with Jessica and Michael Sanders of MJS Ventures, LLC. We have met with our staff and are united in this decision. Backbeat will continue regular operations with our team."

UPDATE: Jessica Sanders, business partner and wife of Michael Sanders, released a statement Friday evening: "As a woman, a wife, and a member of an incredible industry that I love deeply, the events of this week have been nearly incomprehensible to me. I am confused and devastated." Sanders announced her husband went into a rehab facility on Tuesday, and pledged continued compensation for staff that elected to stay on at Drink.Well while it is closed. Read Sanders' full statement. 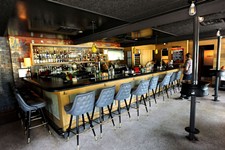