It’s not as gross as it sounds 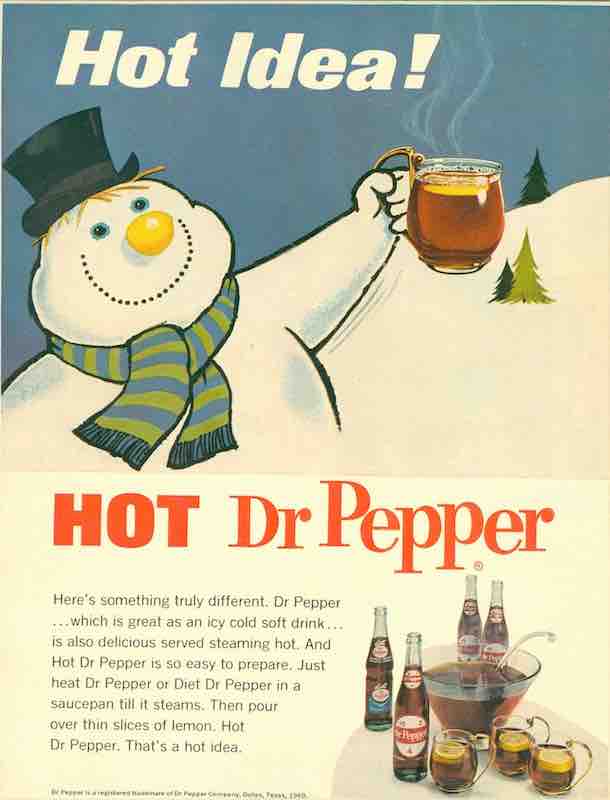 I get it. Whole ad campaigns have been built on the effervescent magic of a soft drink meeting ice. Flat soda typically gets poured down the drain in disgust. And besides, it’s 2017 – aren’t we supposed to not be drinking this stuff anymore?

And yet nothing sends me back to the warm cocoon of my childhood like Hot Dr Pepper. Growing up in Amarillo, it’s what my mom had waiting for us on the stovetop, once my brother and I had peeled off our snowsuits and left them to puddle in the laundry room. That was back in the mid-Eighties, 30 years after Hot Dr Pepper’s first introduction to the cultural conversation, which Waco’s Dr Pepper Museum detailed in a 2015 blog post:

“It all began in September of 1958 when Wesby R. Parker, President of Dr Pepper Company, had an idea to create a warm and comforting version of Dr Pepper. While visiting a bottling plant during a blizzard, one of the route salesmen joked that they needed a hot drink to sell during winter weather. This sparked an idea in Parker and he began to experiment in his kitchen. Through trial and error, he experimented until he found the perfect way to serve Dr Pepper warm.”

Let’s stop there, because this isn’t a story about Wesby R. Parker’s recipe for Hot Dr Pepper (I take issue with his scant use of lemon). Here’s how the Jones Family does it. Pour some Dr Pepper (already flat? even better!) into a saucepan. Toss in lemon slices – enough so that everyone gets a slice in their mug, and accounting for seconds. Bring it just to a boil then remove from heat. The heating turns it slightly syrupy, and the lemon gives it a lovely, lightly medicinal tang.

Okay, back to the official story:

“They marketed the drink under the taglines ‘Devilishly Different’ and ‘Winter Warmer,’ which paved the way for it to be used as an alcoholic mixer. Rum became the favorite choice to mix with HOT Dr Pepper and was known as the ‘Schuss-Boomer.’”

I’ve never tried mixing alcohol with Hot Dr Pepper, because you don’t mix 100 proof with one of your defining childhood memories. But I did consult Merriam-Webster for a definition of “Schussboomer” and discovered it means “a skier who schusses." I didn’t know “schussing” was a thing, because another one of my defining childhood memories is of going skiing exactly once and peeing my pants. So, “Schuss-Boom” your drink at your own peril.

More on the drink’s history from the Dr Pepper Museum:

“From the time HOT Dr Pepper was introduced in the late 1950s, it proved favorable with taste testing and was a popular holiday drink well into the 1970s. And even though the drink became more obscure over time, HOT Dr Pepper merchandise was sold well into the 1990s. There have even been references to the drink in popular culture such as when it was included in the 1999 movie Blast from the Past."

That timeline sounds about right: Jones Family comfort foods tend to fall into a genre I affectionately think of as “suburban housewife,” some of them adapted from recipes my grandmother swapped in the Fifties and Sixties with other wives at San Antonio’s Randolph Air Force Base. Many of these women, my gramma included, traveled the world, and their Americanized spins on the world cuisines they encountered, alongside their own native comfort foods, called for ingredients in any other context I’d probably snobbishly sniff at – Bisquick and Velveeta, La Choy crispy noodles and Campbell’s Cream of Mushroom soup.

Jones Family comfort foods tend to fall into a genre I affectionately think of as “suburban housewife” ... with ingredients in any other context I’d probably snobbishly sniff at – Bisquick and Velveeta, La Choy crispy noodles and Campbell’s Cream of Mushroom soup.

On a blustery day, Hot Dr Pepper pairs very nicely with a bowl of queso and extra-oniony enchiladas. The queso’s a cinch: Gently heat in your mother's hand-me-down Crockpot a block of Velveeta, diced; a can of spicy Rotel; a splash of milk to loosen it up; and a log of sausage first crumbled and cooked on the stovetop. This is Jones Family Comfort Food Gospel, and what I’m about to say is nothing short of sacrilege: I prefer soy sausage in this recipe.

To quote Homer Simpson: It’s sacrilicious. So maybe I should just cool my jets about Wesby R. Parker’s rules for holding lemon for the pour-over and adding a splash of rum to that sweet hot DP action – he took his time, no doubt taking the temperature from trusted advisors, coming to those conclusions: “Through trial and error, he experimented until he found the perfect way to serve Dr Pepper warm.” His perfect way. Comfort food isn't scripture; it’s about the scribbles in the margins, the tweaks we make over time, riffing on the feedback of friends and family, to make something memorable. It doesn’t have to be perfect for everyone – just the ones that matter most to you.

The Dr Pepper Museum is located in Waco, Texas and open year-round to visitors.