Eastside concept is a little bit of everything 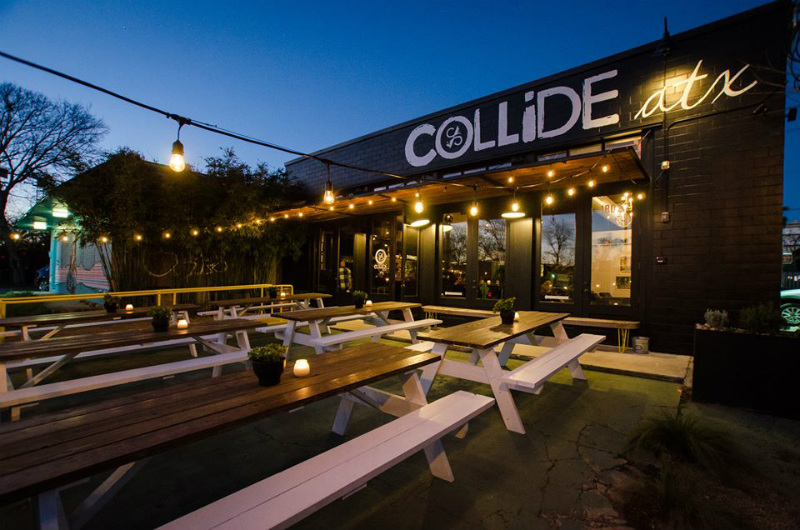 Although fusion seems to be making a comeback in the restaurant game lately, it usually refers to cross-cultural cuisine, rather than an attempt to create a restaurant-bar-gallery-concert hall-event space-co-working space-coffee shop … thing.

At first glance, COLLiDE ATX might seem like it’s doing too much. Opened February 1 after a quick turnaround from pizza joint Burn, the space is a collaboration between marketing agency COLLiDE (the Los Angeles force behind the Travel With Purpose book series and the Cultures Collide Festival) and Dunlap ATX (the local force behind Lustre Pearl, Parlor & Yard, and a cluster of bars on Rainey). 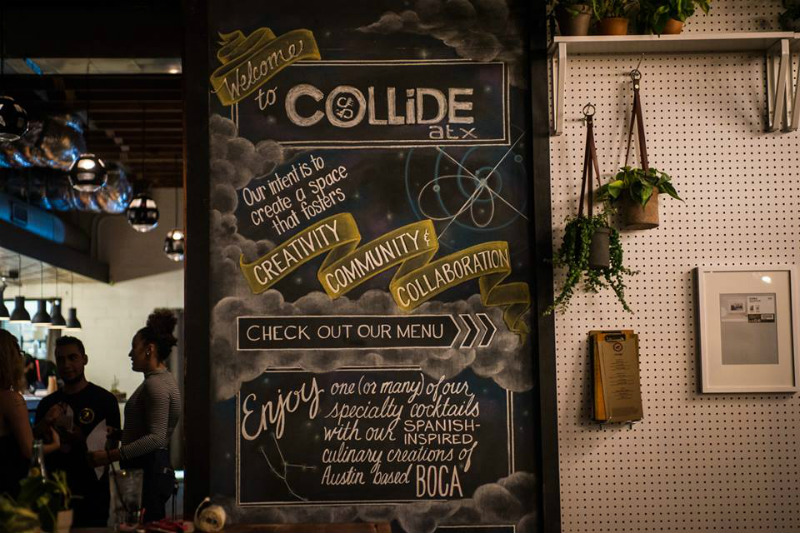 During the day, the space offers an eight-hour-long happy hour (on weekdays) and a co-working space the likes of which have been popping up all over the Eastside and Downtown. During the night, the space gets rowdier and any number of things can occur, from podcast tapings, to live music shows, to DJ sets (like tonight’s Valentine’s happening with Free Candy). This reflects COLLiDE owner Alan Miller’s desire to create a supportive, inclusive space that not only provides a service but gives back to its community, supports it, creates opportunities for networking, and promotes local culture.

A big part of that is the food. The restaurant currently features a pop-up of Clayton Young and Patrick Armstrong’s BOCA, formerly a food truck at Rainey's Container Bar. Inspired by the modern-day pilgrimage the co-founders took together along the El Camino de Santiago in Spain, the menu features lunchtime tacos, nachos, and tapas, and more extensive dinner and brunch menus. If you feel like there’s been a tapas-sized hole in your Austin dining experience, make your way over there quickly, because COLLiDE will only feature each of its chefs/menus for two months at a time before moving on to showcase a chef or menu from another part of the globe. 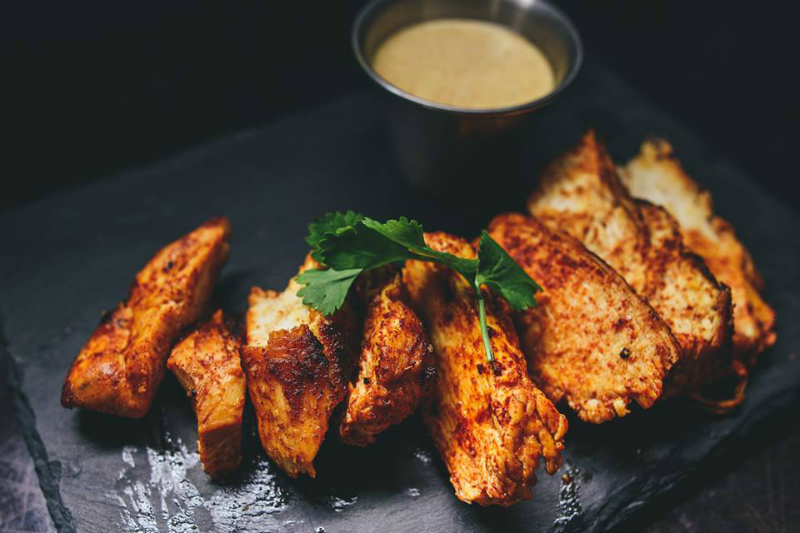 But if Young and Armstrong’s simple yet convincing rendering of classic Spanish cuisine doesn’t quite get your blood pumping (it should), there’s still the house menu that refuses to limit itself to one country, palate, or even hemisphere: edamame, shawarma and tostones are just a few of the offerings. Upcoming guest chefs will present cuisine typical to Mexico City, Chicago, and Poland, among others.

The cocktail list, while not very extensive, again pays homage to the general atmosphere of inclusivity, featuring classic drinks from around the globe such as a caipirinha and original creations like the Campari ice cube-based Il Palio. The beer menu stays grounded in local Austin brews, with a few guest appearances. The wine selection and a couple of sherry cocktails such as the San Antonio Cobbler and the New Spain also offer options to those looking to stick to the business of pairing food with drink. 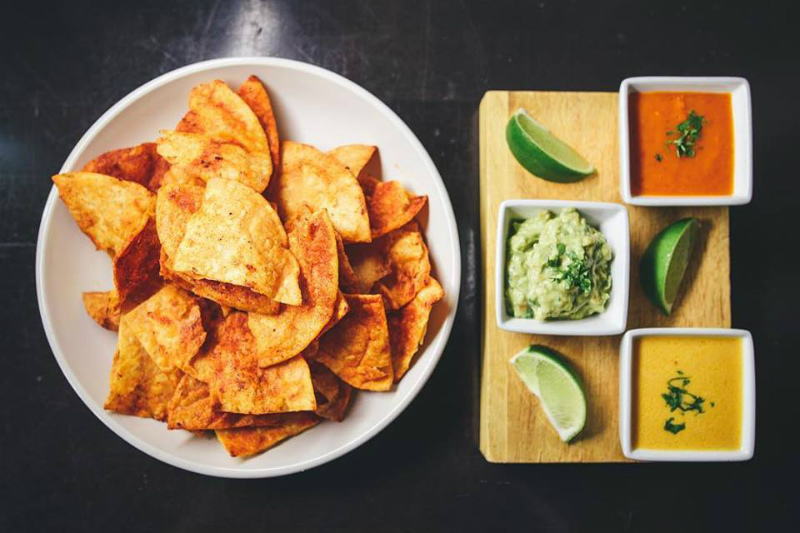 OK, at second glance COLLiDE ATX still seems like it’s doing too much. And from a logistics standpoint, it might be. But a visit to the East Sixth location should serve to dispel most doubts: The space is warm and welcoming, the dinner menu du mois is eclectic, and the atmosphere is relaxed and unassuming. Instead of presenting itself as a gallery pressing for elbow room in a bar, the comfortable lounge area displays Mollie Tuggle’s psychedelic poster work as though it were art hanging in your friend’s living room and you can’t help but move in for a closer look.

Although it may admittedly be catering to coastal sensibilities, and will have to prove itself to Austinites who are usually content with a patio picnic table and a can of Lone Star, it might just end up being your new favorite Eastside joint. It’s the kind of place that offers the draw of a different experience at every visit, packaged up in the familiarity of a place that you know well, and that wants to be there for you no matter what you might need. 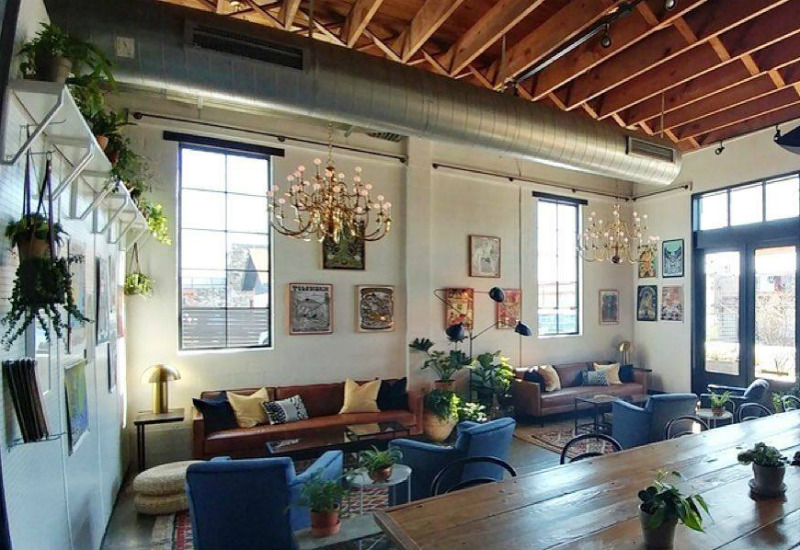 Deep breath, here are the (extensive) stats: COLLiDE ATX is open seven days a week. A lunch (the above-mentioned globally inspired snacks) menu will be served 11am-4pm Monday-Saturday, and Sunday nights alongside BOCA’s lunch menu. A dinner menu (by BOCA) will be served 5pm-close Monday-Saturday. A BOCA brunch menu will be served Sunday morning 11am-4pm. Happy hour 11am-7pm (yes, you read that right) on weekdays will offer $1 off draft beer and wine, and $2 off cocktails. Artwork is always on display in the front and back rooms, and will rotate every 60 days. Events and concerts (all free) will take place on a regular basis and are best discovered through the restaurant’s own social media outlets, as events are announced fairly close to showtime.