Cochon555 Heritage BBQ Is All About the Old-School Pork

Like that scene from The Lion in Winter, where Peter O’Toole as King Henry dismisses an event as occurring only “When pigs fly.” And Katharine Hepburn, as Henry’s estranged wife Eleanor of Aquitaine, replies “There’ll be pork in the trees come morning.” 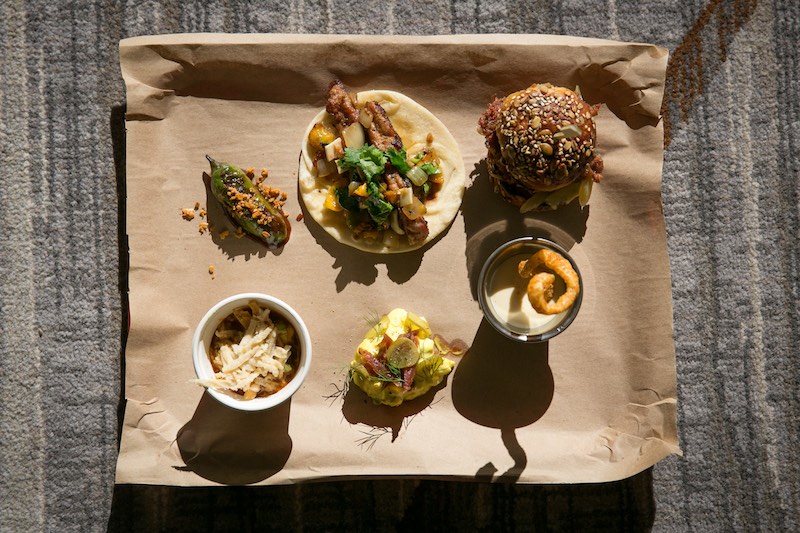 Except there was no pork in the actual trees rising majestic along the riverside swath of greenery between the gently rolling Lower Colorado and the sturdy back of the Four Seasons hotel. No pork in the trees, but pork pretty much everywhere else within that tony expanse: Pork being served up, juicy and hot and diversely spiced, at tables arranged along the periphery of the manicured courtyard, and similarly proffered at a battery of festooned stations within a vast interior ballroom. Pork from a variety of pigs, heritage breeds all, prepared by a phalanx of local chefs – some of whom you could legitimately call celebrity chefs, all of whom know what they hell they’re doing when it comes to turning a well-raised food animal into a sort of multipartite culinary miracle.

Listen: Created in 2008 in response to the lack of education around heritage breed pigs, the world’s first environmentally conscious nose-to-tail pig competition started a series of national conversations about family farmers struggling to educate chefs and consumers about the health benefits of using old-time livestock.

That’s Brady Lowe, who started this Cochon555 thing, this touring culinary celebration that goes from New York to Minneapolis to Houston to Denver to Chicago to San Francisco to – you get the idea: It’s a national tour, locally sourced at each stop, and Lowe is the hands-on honcho continuing to spread the piggy gospel to markets across the country.

(And you’ve already clicked over to the Cochon555 site and plumbed the depths of information there, right? We don’t have to point you directly to the philanthropic Piggy Bank Foundation that Lowe’s set up, do we?)

Last Sunday’s event at the Four Seasons featured a competition among four chefs, each of whom were, on the previous Sunday, given a different heritage breed for butchering and curing and smoking and cooking – for whatever they chose to do with it, their hard-won skills and talents guiding the process to completion, to be presented for the delectation of a hungry group of industry judges – and the fortunate guests who swarmed in after the judging was done.

We should tell you: The competing chefs were Bryce Gilmore of Barley Swine, Michael Winkelman of Lonesome Dove, Crash Hethcox of Houston's Ritual, and​ Tim Rattray of San Antonio's The Granary. And the winning chef was that Bryce Gilmore.

But that’s only four chefs, only four pigs; because that was “just” the competition. And, while competing’s fun, this Cochon gig isn’t all about the battling firemongers. That’s why more acclaimed local chefs – Lance Kirkpatrick of Stiles Switch, Sarah McIntosh of Épicerie, Jacob Weaver of Juliet, Evan Leroy of Salt & Time, Elmar Prambs of TRIO, among others – were also part of the afternoon’s excellence, having conjured heritage pigs into dishes representing different styles of global barbecue: satay, barbacoa, char siu, lechón, yakiniku, and more.

So, yes: Pork, just about everywhere except in the trees.

But the point of that Lion in Winter reference is more to suggest – since this Heritage BBQ initiative of Brady Lowe’s also boasted sommelier and bartender competitions, also featured a cheese bar (Antonelli’s!) and a pickle bar (Hat Creek!), and more wine tastings and top-flight liquor pourings (Glenfiddich! Don Julio!) than you could shake a swizzle stick at, and the whole epicurean machine running smoothly to expand the possibilities of hedonism among the smiling crowd – it’s to suggest that even a king of ye olden times wouldn’t have known such tasty luxury. Although, who knows, at some point the royal fellow might have eaten one of those heritage breeds himself.