Sonya Coté Debuts A Table in the Garden 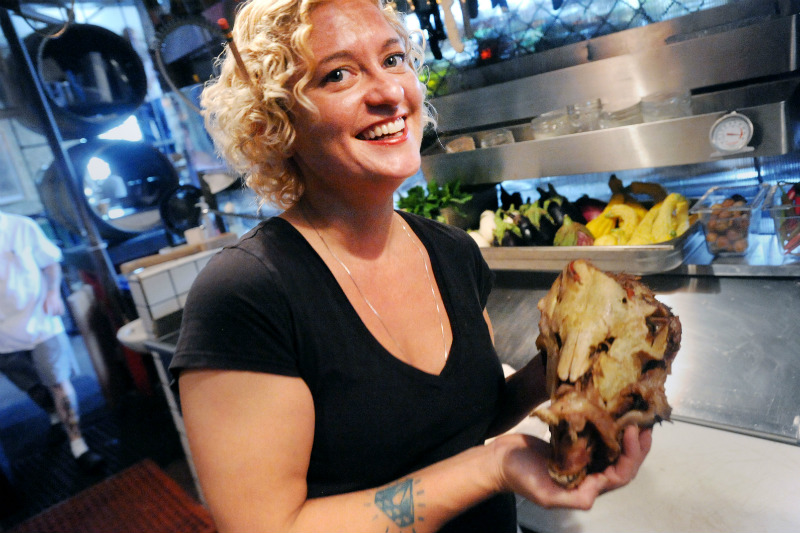 Sometimes a cookbook is just a collection of recipes. When Sonya Coté is at the helm, it can be a lot of other things too – an art project, a history, a community testament, and a love letter to Austin.

The chef and restaurateur (Hillside Farmacy, Eden East at Springdale Farm, and Coté Catering) already has a lot on her plate, but that didn’t stop her from taking on a year long residency as part of the “Drawing Lines: Explorations of Place” exhibition commissioned to honor the diversity of Austin’s communities at the anniversary of 10-1. Coté was one of 10 artists selected to build site-specific public art tied to one of the new council districts.

Coté was matched with District 5 and the Cherry Creek Community Garden, a tract of land where 25 homes once stood on an active floodplain, that was later redeveloped with a FEMA grant. Coté’s contribution in collaboration with her nonprofit The Homegrown Revival, was a table designed by Alan Gonzales (he also made the tables at Eden East) made from wood reclaimed from the Bastrop fires. “The families that lived in those homes had to move away, leaving this neighborhood with only half of their neighbors,” said Coté, “It felt good to give them a place to pull up a chair.” Although some of the project’s artists, like Grammy winner Adrian Queseda, had roots in their districts, some of the pairings were an introduction. “I have no previous connection to District 5,” says Coté, “although I feel many connections now after learning some of these character’s stories through recipes.” She adds “we do joke that it’s sort of hilarious to place the chef in the ‘bacon strip’ district represented by City Councilwoman Ann Kitchen.” Bonds quickly formed, however, and her first book, A Table in the Garden, was born – a combination cookbook and sketch portfolio telling the stories behind the community.

“Frankie Hefley, an active member of the garden, collected the recipes,” Coté says. “I arranged them in a way and added a few of my own recipes in for fun. Illustrating each one of the recipes really helped me to connect to each individual’s story.” The closing recipes were a pair of sugar cookie recipes copied with the original notes, a way for her to dedicate the book to a person who was important to the garden’s start.

“Cooking, sharing recipes, growing food all bring our communities together and offer support for one another.” Coté says. “It feels good to share those moments with your neighbors over the table, sharing food that you might have grown, hunted or cooked. Humans have the need to gather that sometimes get lost in the everyday chaos of modern life.”

A Table in the Garden will be available at the Drawing Lines exhibit from April 1-10 at the McKean-Eilers Building (323 Congress Ave.) as well as at Hillside and Eden East beginning April 1.

Monkey Town 6: Where You Want To Be
Montgomery Knott’s multimedia pop-up rewards all your senses