If mythical Asgard, home of the Norse gods, were an actual place – especially as depicted by Jack Kirby in the pages of Marvel comic books hundreds of years after Snorri Sturluson wrote his takes on the Prose Edda and decades before the first Hollywooded movie about Thor – the kitchenmaster of that glorious realm would probably be someone like Magnus Nilsson. 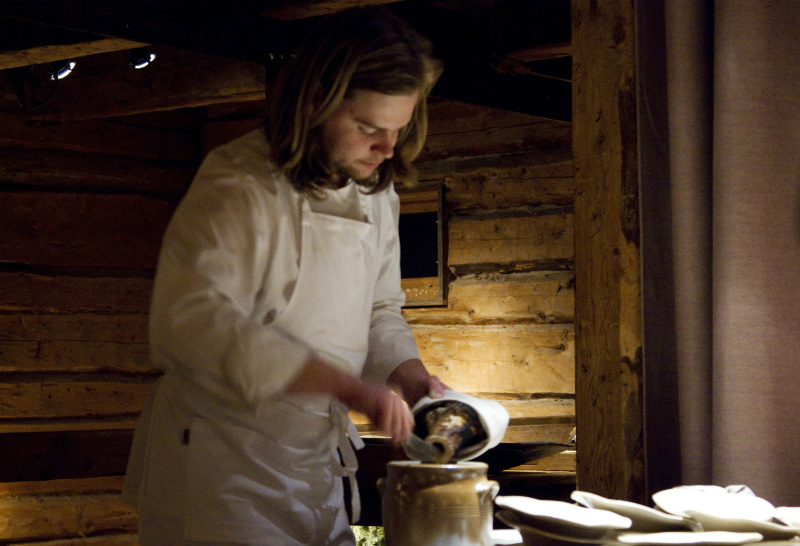 Magnus: an unharried Nilsson (photo by Miyagawa/CC BY 2.0)

But only someone like him, because the renowned Nordic chef himself is currently way too busy right here in Midgard.

For instance, Chef Nilsson is spearheading, or at least providing the involved public face of, the inaugural collaboration between high-end publisher Phaidon and the socio-culinary mavericks at Dinner Lab.

We told you about Dinner Lab last year, when that provocative foodie phenom staged an event during SXSW. They're the organization that presents full-service, multicourse dinners created by up-and-coming culinary stars – presents them in unexpected places: An abandoned warehouse, a motorcycle showroom, the roof of a parking garage, the properties room of an opera company.

And Phaidon you probably already know, right? The international publishing house that creates some of the world's finest books, especially those oversized kind called coffee-table books, that cover subjects from architecture to high fashion, from movies to mapmaking, history to horology, and, oh, go ahead, it's the gift-giving time of year again, take a look at their catalog.

And by way of promoting this magnum opus and Nordic cuisine in general, Phaidon and Dinner Lab are staging Scandinavian dinners in six U.S. cities, dinners overseen by Chef Nilsson and created by chefs flown in from those cold Northern climes overseas, dinners at which that impressive cookbook is included in the ticket price.

Why we're telling you this is because Austin is one of those six cities. (The other five are Boston, New York, New Orleans, San Francisco, and Portland.)

On Wednesday, November 18, at 8pm, Chef Gísli Audunsson of Iceland's Slippurinn restaurant will present a five-course meal somewhere in our bustling river city.

[Tip: If you want to know precisely where, sign up for a Dinner Lab membership here. And note that there are two different levels of membership now, and one of them is free.]

We recently spoke with Dinner Lab's CEO Brian Bordainick about the event:

Austin Chronicle: It seems like, of all the different cuisines one typically hears about when mingling among foodies, the Nordic tradition is one that's usually been underrepresented. And that Scandinavian-based restaurants are similarly rare in even the larger American cities. Is that a legit perception?

Brian Bordainick: You certainly do see that, to some extent. To be honest, there are some highly rated Nordic restaurants in the United States – like you have Aquavit in New York, and places like that – but they are underrepresented. They’re even analogous to U.S. Southern food, in that they’ve been historically thought of as being one way for a long period of time, and it takes a bunch of creative chefs coming up with new ideas for that cooking to evolve – and then they wind up doing historically accurate but really awesome interpretations of dishes. Nordic cuisine, like most food, is ripe to be experimented with and taken to the next level.

AC: Besides that Dinner Lab is pretty damn good at what it does ... are there other, more specific reasons why Phaidon hooked up with y’all in particular for this project?

BB: Well, our stance as a company is that we tend to take things seriously before other people take them seriously. We’re willing to experiment and bring forward ideas that have merit but haven’t necessarily taken hold in the general marketplace, and this is exactly the type of thing we like to do with food – sort of redefining community and bringing together people who wouldn’t otherwise sit at a table together. And when you look at what Phaidon is trying to accomplish and what Dinner Lab is trying to accomplish, there’s a lot of overlap.

AC: And why Gísli Audunsson for the Austin section of the tour?

BB: He’s doing some really interesting stuff on a tiny little island off the coast of Iceland, in his restaurant Slippurinn. He does really creative tasting menus, and interesting plays on historically Icelandic and Nordic cuisine, and that goes hand-in-hand with what we’re doing. It’ll be interesting to see how people in Austin perceive him.

And what about how Audunsson perceives Austin?
We spoke with the chef later that same week:

Austin Chronicle: Have you been to Austin before? Or Texas? Or, hell, even the United States?

Gísli Audunsson: I was at a restaurant in New York in 2013, for half a year. But I haven’t been to Texas before, and I’m really excited to come there.

AC: And why did Magnus and the Phaidon/Dinner Lab choose you to be part of this tour?

GA: I guess it’s because, at my restaurant Matur og Drykkur in Reyjavik, we’re doing a lot of traditional Icelandic cuisine. We’re elevating the traditional cuisine, and our goal here is to make Icelanders proud of Icelandic food. And it’s been going well, and I guess that’s why we were asked to be a part of this. It’s a really exciting project to be a part of. We serve a mix of dishes at Matur og Drykkur, and other dishes at Slippurin, the other restarant that I opened with my family in 2012. And what I’m preparing in Austin is like a mix of dishes from those two places.

And so that's what we get to happily anticipate on Wednesday night here in the ATX, with Audunsson cooking up a Nordic storm and Nilsson presenting his epic cookbook and the Dinner Lab crew making sure everything runs as smooth as Sleipnir's milkwhite mane.

But why this city, anyway?

"We love Austin," says Brian Bordainick. "It was Dinner Lab’s second city, so we already have a special place for it in our hearts. But when we do something like this, our first time doing it, we’re looking for cities that we know are early adopters of weird things. For better or for worse, there are cities that are always ahead of the curve, always willing to try new stuff – and Austin is definitely one of those. So it seemed like a natural fit."