Tiff's Treats expands, Austin bakes for a good cause, and more in today's food news.

Jodi Eliott's charming Bribery Bakery is featured in the November issue of Food & Wine magazine in a story touting a new breed of American bakeshops. The article offers recipes for Thanksgiving-flavored desserts such as Bribery's cranberry lime shortbread and a signature apple pie from Rebecca Masson of Houston's Fluff Bake Bar. Check it out.

Gluten-free baking maven Karen Morgan finally has a local brick-and-mortar outlet for her exemplary baked goods. Blackbird Bakery is newly open in the Lakeway area, offering gluten-free doughnut holes, pastries, cookies, tarts, and breads, in addition to made-to-order pies and cakes. The store is now open from 7:30am-5pm weekdays and 7am-1pm on Saturday. It's not too early to make those holiday pie orders! Five years ago, transplanted New Jerseyans Nicole and Richard Spiegel were thrilled when they heard fellow Jersey native Scott Campanozzi was opening an authentic East Coast bagel shop in Southwest Austin. Like many Wholy Bagel customers, the Spiegels became good friends with Campanozzi and earlier this year, they approached him with a proposal. The Spiegels' interest in entrepreneurship inspired them to suggest to Campanozzi that they open a second Wholy Bagel outlet and help him grow the already popular brand. Campanozzi wasn't interested in the original proposal but made a counter offer: He was willing to sell Wholy Bagel to the eager couple.

In preparation for the transition, Nicole Spiegel began working in the shop during the summer before the sale was finalized on October 1. The Spiegels want to assure the fiercely loyal established fan base that they have no intention of changing the bagel recipes, the signature cream cheese spreads, or the current menu items. The same long-time bakers and many other employees are being retained to ensure consistency. Richard Spiegel says they have improved the customer traffic flow in the shop, spiffed up the interiors, and made some adjustments in decor. He says they are determined to focus on improving cleanliness and customer service. He and Nicole would like to feature some locally-sourced items created by local food artisans and expand the sandwich menu to include some Austin-inspired dishes. His next project will be rebranding the business with a new custom logo. Long-range plans include expansion of wholesale and catering sales as well as a very active community involvement program based on sponsorships and participation in charity events. Most importantly, the Spiegels intend for Wholy Bagel to remain Austin's reliable purveyor of authentic East Coast bagels. 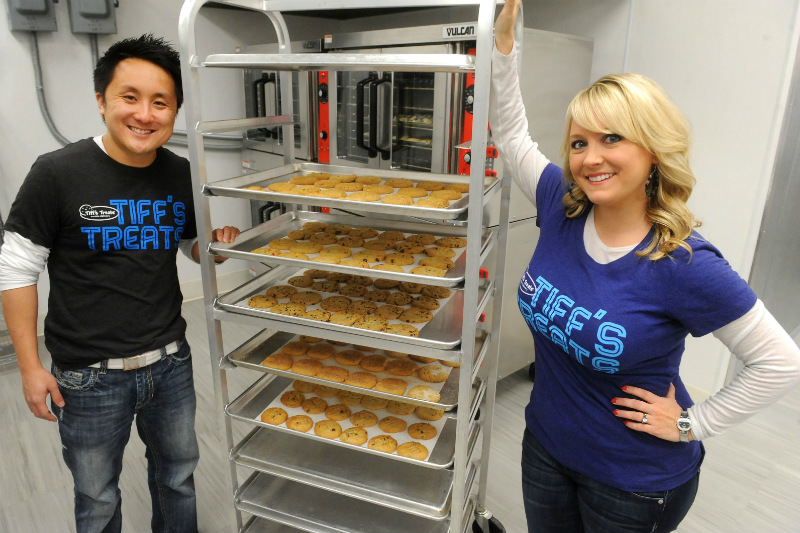 Austin's sixth Tiff's Treats outlet debuts in the Mueller development on Sunday, Oct. 25 with a grand opening party featuring bargain prices on cookies and a personal appearance by Longhorn icon Vince Young. Young will meet and greet from 9am-11am and the store will offer a dozen cookies for $6 to benefit Texas Foster Angels from 9am-1pm.

Austin Bakes for Refugees will host a charity bake sale on Sunday, Nov. 14 to benefit refugees of the unrest in Syria. From 11am-3pm, three restaurants – Stiles Switch BBQ & Brew, Micklethwait Craft Meats /Romanouskas Delicatessen, and Crema Bakery and Cafe – will host local bloggers, foodies, and businesses in what has now become a tradition. Full details at the organization's website.