Our picks for sausage, schnitzel, and steins 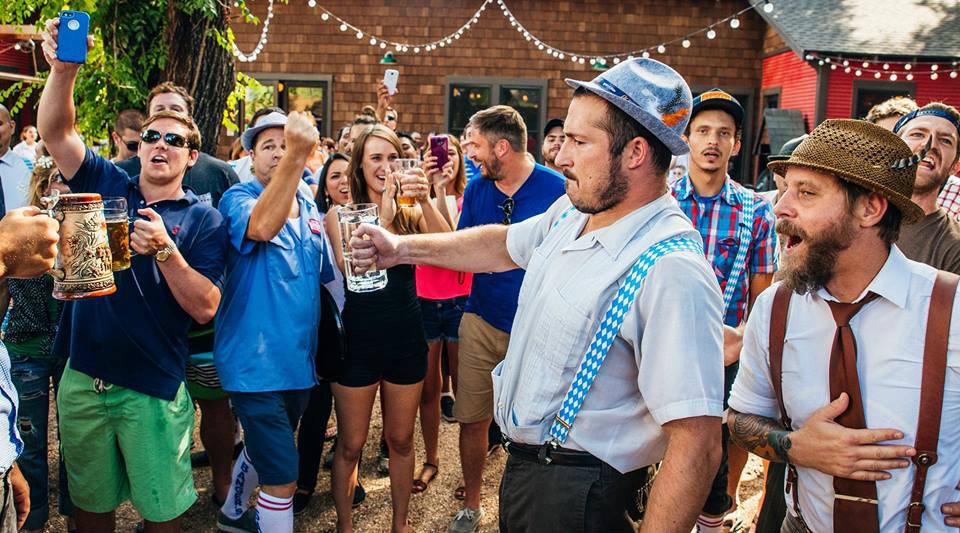 We know that the original Munich Volksfest is now just a woozy, beer-soaked memory, but Texans can throw Oktoberfest any damn time we want. Sure, some air-conditioned purists break out their dirndls in late September, but we think sausage tastes better without sweaty mustard.

Although we know this weekend's temperatures are only going to be slightly less hellish, we'll be out wearing one of those funny, little Alpine hats, getting our oom-pah-pah on in (relative) comfort.

Mean Eyed Cat is hosting a “Cat-Oberfest” that sadly does not include any drunken tabbies wearing lederhosen. As a pretty darn good consolation prize, however, the West Fifth bar will be offering two authentic Oktoberfest brews along with a selection of awesome local beers on tap. Stubbs will be bringing signature sausages – a sentence you should try saying at the end of the night. Friday-Sunday, Oct. 16-18.

Banger's Sausage House and Beer Garden is recreating some Munich magic with their four-day festival. The fun begins today with a traditional opening gun salute and something called a yodel blitz (Wikipedia was no help at all in determining what that actually is). Later in the weekend, there’s chicken shit bingo, a stein hoist competition, German specialties like spaetzel and sauerkraut, and beer, beer, bier. Thursday-Sunday, Oct. 15-18.

Dai Due Butcher Shop and Supper Club is teaming up with Real Ale for a beer pairing dinner later in the month. There are only a handful of tickets left, so you should probably tell your husband to stop being so indecisive. The four course meal starts with sausages, sülze, and quark cheese and ends in kugelhopf (as all things should). Tickets are $65, with seatings at 5:30 and 8:30pm. Tuesday, Oct. 27.

For revelers who are more into Dieter Bohlen than Flula Borg (I have no idea who either of those people are, but Wikipedia assures me they are German), Prelog’s European Kitchen & Bar is offering an elegant evening far away from the hordes. Sip Riesling on their gorgeous patio while scarfing down chef Florian Prelog’s German-inspired menu. Space is limited, so make reservations ahead. Wednesday, Oct. 21, 4:30pm-close.

Flying Saucer doesn’t call their annual BeerFeast an Oktoberfest celebration, but the event page does include a picture of someone dressed up as the St. Pauli Girl. And we would be remiss not to mention an event that has 800 beers on tap. Ok, it’s really closer to 80, but it’s a curated collection that includes local favorites, rare offerings, and a few limited releases. In short, it’s a beer nerd’s dream come true. Why should Germans have all the fun? More info and tickets available here. Saturday, Oct. 17, 2-6:30pm.