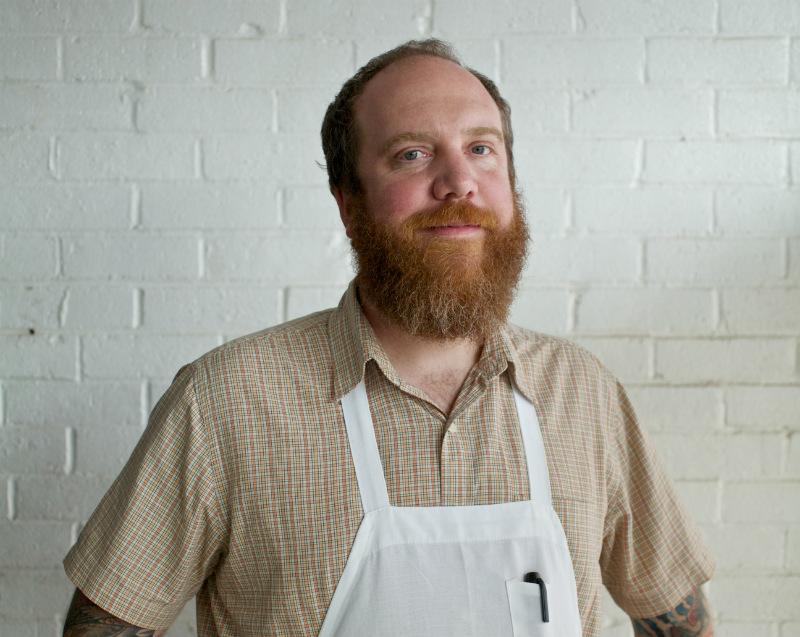 Jesse Griffiths (photo by Jody Horton/ Courtesy of Dai Due)

• Dai Due Butcher Shop & Supper Club (2406 Manor Rd.) has been named one of Bon Appetit's Hot 10 New Restaurants for 2015. It's official, restaurant editor Andrew Knowlton is an unabashed fan of the Austin restaurant scene, lavishing plenty of love on the distinctive 1-year-old eatery. Knowlton describes the food at Dai Due as "honest and resourceful, just like its hunter-gatherer chef, Jesse Griffiths" and goes on to share Griffiths' techniques and recipes for preparing the best roast chicken. It's clear Knowlton appreciates the authenticity of Griffiths' Texas-sourced, seasonally-based cuisine. More than any other chef in Austin, Griffiths joyously walks the locavore walk; in his hands, eating in season becomes a celebration. The national acclaim comes just as Dai Due is marking its one year anniversary with the addition of a new outdoor cooking and dining facility. According to the always unpretentious Griffiths, the recognition was a surprise. "We're all still in shock," he says.

• A couple of local organizations want to encourage safe driving over the upcoming Labor Day weekend and they're offering great deals to prove it. The law firm of Sutliff & Stout is offering one safe cab ride home between Saturday, Sept. 5 and Monday, Sept. 7th via cab or other ride sharing service. In order to take advantage of this offer, riders must be of legal drinking age and have a PayPal account. The maximum value is $30 on a safe ride home in the Austin metro area. Pay for the ride up front and then by Sept. 14 submit the receipt, a photocopy of your driver's license, and a PayPal-associated email address to: No DWI Holiday Cab Program; Sutliff & Stout, PLLC; 101 W. Sixth #510; Austin, Texas, 78701. Also, the Wine & Food Foundation of Texas has worked out a deal for first-time Uber users to take $20 off the cost of their first ride by using the promo code WINEFOODFDNTX on the Uber app. First-time Uber customers can use this deal over the holiday weekend or after the upcoming Tour de Vin party on Sept. 17, but regardless of when it gets used, Uber will donate some of the proceeds back to the foundation as a bonus.

• Gateway Guesthouse (1001 E. Riverside Dr.) owner Blaise Bahara and chef Bess Giannakaksis have put the lovely house overlooking Lady Bird Lake up for sale. The affable ladies are packing up their pooches Louie, Leo, and Lazos and heading west to the California wine country while they "still have youth, beauty, and muscle" on their side, according to the newsletter announcement. During their tenure in Austin, Bahara and Giannakaksis have been active in historical preservation in their neighborhood and offered staunch support to Project Transitions, holding sold out Guess Who's Coming to Dinner parties several years in a row. Their warm hospitality and generous contributions to the community will be missed.

• The long-awaited South Congress Hotel 1603 S. Congress Ave.) opens for business on Tuesday, Sept. 8. Initially, the casual Café No Se and the Lobby Bar will be open to the public. Later in the month, look for the debut of the more upscale Central Standard Bar & Grill, followed by some select retail outlets, a coffee shop and fresh pressed juice bar called Mañana, plus chef Paul Qui's 12-seat Japanese eatery, Otoko.

• Here's a lightning round of local news bites. Saturday, Aug. 29 is the final day of Twin Liquors biannual Dollar Sale at outlets all over town – selling bottles at one dollar over cost … Fleming's Prime Steakhouse & Wine Bar (320 E. Second; 11600 Century Oaks Terrace) is now open for lunch Monday through Friday from 11:30am to 2pm … Sebastian Caillabet advises us that the opening of his Lox Box & Barrel Gourmet Deli (9521 Hwy 290 West) in Dripping Springs has been pushed back to Nov. 1 … St. Philip has added some special weekday promotions to their lineup. Look for all night happy hour prices beginning at 3pm on Sundays and Mondays, Pizza & Pint nights on Tuesdays from 3-6pm, BBQ Oysters on the patio on Wednesday from 3-6pm, and Butterscotch Miso Wings on Thursdays from 3-6pm … The homegrown quick-casual Tarka Indian Kitchen is the most recent local restaurant to lease space in the Rock Rose section of the Domain.

Here are some events coming up this week that you won't want to miss.