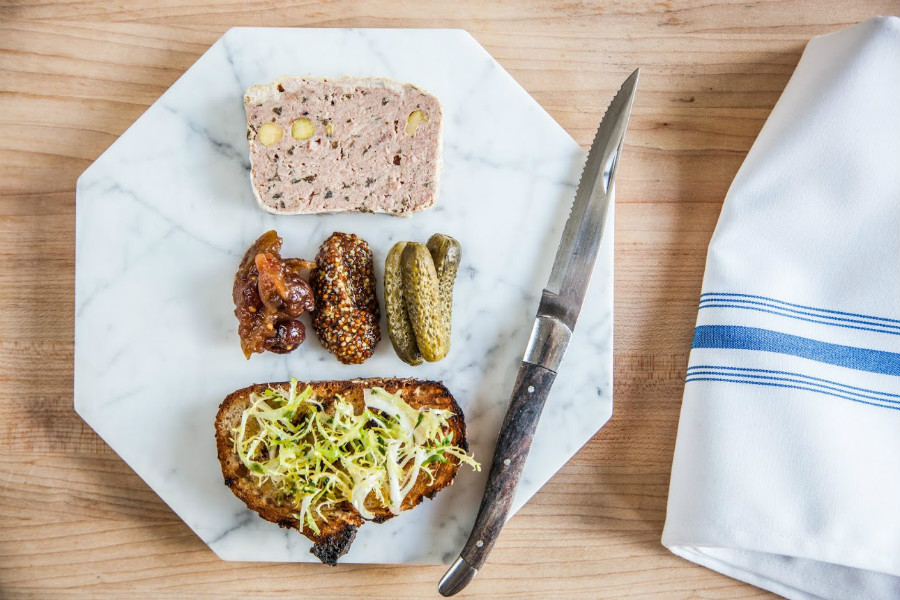 • Goodall's Kitchen, the restaurant in the stately boutique Hotel Ella (1900 Rio Grande) in West Campus, has recently undergone a redesign and is newly reopened. The redesign was implemented by Waterloo Workshop, the in-house creative department of New Waterloo, an integrated hospitality management and development company owned by Jesse Herman, Delfo Trombetta, Bil Stapleton, Bart Knaggs, Patrick Jeffers, and Stuart McManus. New Waterloo also owns the soon-to-open South Congress Hotel, and they've brought in chef Michael Paley to be executive chef for the dining outlets in both properties. Paley has developed a seasonal, bistro-style menu for the new version of Goodall's, saying "In today's diverse dining climate, simplicity is the key. Executing clean, bold flavors with a focus on seasonality and quality can wow diners across the board and keep them coming back." Goodall's takes reservations, and guests can enjoy breakfast, brunch, lunch, and dinner in the dining room or on the wide, shady porch. A limited menu will also be available during happy hour in the vintage Parlor Bar.

• la Barbecue (902 E. Cesar Chavez) general manager Ali Clem confirms that it will be wheels up for the popular trailer at the end of September, when they'll roll several blocks east to the Aztec Food Trailer Park (1906 E. Cesar Chavez). The move will make it possible for la Barbecue to expand into evening hours of operation and serve patrons from nearby bars such as Stay Gold, Drinks Lounge, and Craftsman. According to Clem, the menu in the new spot will include a variety of special items, "such as smoked duck and different sausages." She also told us that John Lewis is staying busy this summer staging weekly barbeque pop-ups at Charleston's Revelry Brewery, while he waits for his Lewis Barbecue to be completed. Turns out, the appeal of his toothsome brisket and Texas "hot guts" has folks in Charleston learning something about standing in line for barbecue.

• Wheatsville Co-op (3101 Guadalupe; 4001 S. Lamar) has launched Co-op Explorers, a free organic fruit program for kids 12 and under that encourages sustainable, healthy eating. Stop by the Hospitality desk at either store with the kids to get a free organic banana or apple and an official explorer sticker. After the kids have enjoyed the fruit and the shopping excursion, dispense of the peel or core in one of the in-store compost bins to help keep Mother Nature healthy and strong, too.

• Dai Due chef Jesse Griffiths was so pleased with the success of the first Gulf Coast Hunting and Fishing School that it will be repeated this September. Teaming up with Coastal Wings Guide Service and Lodge will make it possible for students to experience four days of hunting for teal ducks and white wing doves as well as the opportunity to catch several species of fish. The trips cost $2,250 per person which covers lodging, hunting, fishing, cooking classes with recipes, meals prepared by chef Morgan Angelone, and a signed copy of Afield: A Chef's Guide to Preparing and Cooking Game and Fish (Welcome Books). Reservations may be made via email to Larry Robinson at coastalwings@yahoo.com. For more details, contact Jesse Griffiths at info@daidueaustin.com. Sunday, Sept. 20 - Wednesday, Sept. 23.

Here are a couple of events you won't want to miss.

• Longtime Austin chef Josie Paredes, owner of the La Fantabulous and La Sirena food trailers, is offering a series of pop-up dinners at various locations around the city. Each evening will offer the opportunity for guests to enjoy a four-course meal with cocktail pairings in a casual and convivial atmosphere. Paredes has dubbed these dinner parties Nelly Nights, al in the spirit of good, silly fun. The first Nelly Night has Paredes taking over 34th Street Cafe (1005 W. 34th) so her guests can try some new things and meet some new people. Purchase tickets here. Sunday, Aug. 23, 6pm.

• Messina Hof Winery & Resort has been celebrating the harvest every weekend in August at their property near Bryan, but the festivities move to Messina Hof Hill Country for the last weekend of the month with grape stomping, tastings, meals, and parties. Check out the details and hit the road. Friday - Sunday, Aug, 28-30.