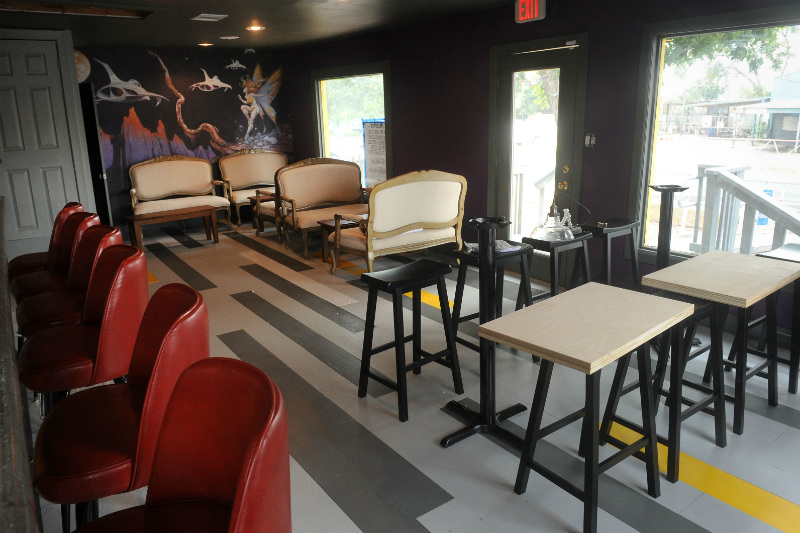 • Royal Jelly (704 W. St. Johns) is a new casual cafe and bar from Dominic Mauro, former general manager of the Mansion at Judge's Hill, and chef Matthew Walker, formerly of Swift's Attic. Mauro tells us the new spot, with inside and patio dining, will offer a small, seasonally changing menu of internationally inspired sharable plates, plus a sandwich or two and dessert. Look for those things to be complemented by an eclectic beer and wine selection. Royal Jelly will be open daily from 4pm to midnight, with happy hour Sunday through Friday from 4-6pm. The target opening date is Tuesday, Sept. 1.

• L'Oca D'Oro maestro Fiore Tedesco has signed a lease for the brick-and-mortar version of his business in the Mueller development near the Thinkery at 1900 Simond. He hopes to have the restaurant open in early 2016. Meanwhile, he'll continue his innovative series of pop-up dinners such as the one tonight at Congregation Agudas Achim at the Dell Jewish Community Center (7300 Hart). The Body & Soul dinner will feature a four-course themed meal with wine and cocktail pairings, and theology by Rabbi Neil Blumofe. Tickets are $65 including tax and gratuity, available at info@locadoroaustin.com. Friday, Aug. 21, 7pm.

• Toss Pizzeria & Pub (2901 S. First) will soon join the lineup of new casual neighborhood hangouts in south central Austin. The three business partners behind Toss bring very different backgrounds to the project. Justin de la Cruz is a real estate professional, chef John Pennington spent several years with Southside Flying Pizza before his current position at Winflo Osteria, and Jace Pirtle has been part of the expansion team at popular local brand Tiff's Treats. Together they plan to create a comfortable place where folks can enjoy New York-style pizzas by the slice or whole pie, plus appetizers, hot sandwiches, salads, and desserts. De la Cruz says they'll have a serious focus on local beers and also offer a selection of frozen cocktails such as margaritas and sangria at lunch and dinner, and frozen mimosas to complement the breakfast pizzas during weekend brunch. In addition to both indoor and shaded patio seating, look for Toss to offer takeout and delivery service. De la Cruz reports they are just now navigating the city permit process and would like to be open sometime in November.

• The Texas Farmers' Market at the Domain will not be continuing into the fall. According to market manager Carla Jenkins, opening with nine weekends of rain followed by scorching summer heat made it impossible for vendors to establish a profitable market. Jenkins will stay in touch with Simon Properties about the possibility of trying a market at the Domain again in the spring of 2016, but for the time being, she and the vendors will focus on the Texas Farmers' Market at Lakeline on Saturdays from 9am-1pm, and at Mueller, where Sept. 6 they will revert to their fall hours of 10am-2pm on Sundays.

• The Hightower (1209 E. Seventh) will host a Fleet Coffee pop-up during Saturday brunch this weekend. In addition to the regular brunch menu and Bloody Mary bar, guests can purchase from a preview of Fleet offerings such as Madcap Third Coast Espresso and Madcap Summer Solstice on pour-over. This is one of a series of pop-ups Fleet Coffee is staging while their brick-and-mortar outlet is being completed at 2427 Webberville Rd. Saturday, Aug. 22, 11am-2:30pm.

• Austin Cake Ball (5310 Burnet Rd.; 3401 Esperanza Crossing #104) is celebrating their seventh anniversary during the entire month of August by offering a $7 discount on online orders of a dozen or more cake balls using the coupon code: Happybday.

• If you happen to notice a group of employees gathering outside the Freebirds World Burrito outlet in Hancock Center on Saturday morning, it's because they're embarking on a back-to-school mission for the kids at Medina Children's Home. The local Freebirds employees, also known as “The Tribe,'' will join Tribe members from San Antonio to throw a party for the kids in Medina, complete with food, carnival booths, and games, plus a backpack full of school supplies and a pass to Six Flags Over Texas for each kid. Saturday, Aug. 22.