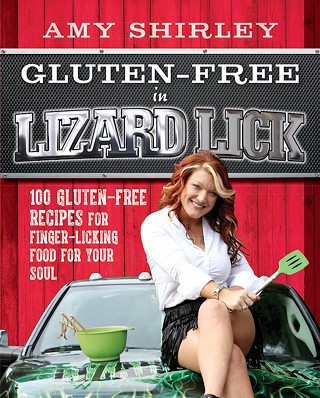 What could award-winning North Carolina power lifter and reality TV star Amy Shirley possibly have in common with Karen Morgan, owner of Austin's Blackbird Bakery? Why, sensitivity to gluten in their diets, of course.

Shirley explains it like this on the cover of her new book, Gluten-Free in Lizard Lick: “I can repo a truck, deadlift 450 pounds, and raise four kids without crashing or collapsing, but a serious gluten allergy hit the brakes on my entire way of life and almost sent me to the junkyard.” She was overwhelmed by the implications of her diagnosis until a mutual friend suggested she contact Morgan. She now says that phone call literally changed her life.

Morgan assured Shirley she would survive once she was armed with the secrets to discovering the hidden gluten lurking in everything from bread and pasta to makeup and shampoo. Initially, Morgan generously shared a list of gluten-free products that Amy could trust, which proved incredibly helpful. Amy certainly wanted relief from her symptoms, but as a Southerner, she was not about to give up biscuits and spoon bread, cake and cobbler, or some of the other dishes her family loved.

Morgan helped her solve that problem, too, by showing her how to adapt a beloved cake recipe. Armed with a baking mix recipe formulated by Morgan, Shirley whipped up a version of her Mama's 1-2-3-4 Cake that had always been one of her favorite comfort foods. The success of that first cake inspired her to add a gluten-free cookbook and packaged baking mix to her already well-established personal brand. Her knowledgeable new Austin friend agreed to work on the book with her.

According to Morgan, the challenge for her was working with recipes and a style of cooking that were distinctly different from her own. “The food in this book represents a big step outside my personal wheelhouse, but I know there's an audience for it because gluten sensitivity is not just a fad, it's a health crisis in our society," Morgan told us last week. "I realized that working on a book for Amy's audience would mean helping more people, and that appealed to me.” As anyone who has seen TruTV's Lizard Lick Towing would expect, Amy's food is simple and country with an occasional kick to it. She's busy repossessing cars around Raleigh, raising kids, and keeping husband Ronnie happy, so there are some dishes that are easily prepared “with a can opener, a microwave, and less than 30 minutes," as Shirley says.

The two cooks wanted good gluten-free eating to be possible for Shirley's kind of cooking, and they've accomplished that goal. The book reads like a conversation at the kitchen table, with Shirley's humor and personality right in your face. There are spaces with every recipe for cooks to make their own notes and adjustments, as well as useful lists of prepared foods and baking ingredients. My main criticism is that there is no index, an oversight on the part of any cookbook publisher who wants the book to be really useful.

According to Shirley, “Going gluten-free ain't easy, but there's no reason it can't be delicious. Just because you're a redneck doesn't mean you can't eat well.” She's right.