• The six restaurants of McGuire Moorman Hospitality – Lambert's Barbecue, Perla's, Elizabeth Street Cafe, Clark's Oyster Bar, Josephine House, and Jeffrey's have thrown down the gauntlet, issuing a challenge to all Austin burger aficionados: Eat a burger in each of their six restaurants in August and get a $50 gift card to the MMH restaurant of your choice, plus a burger challenge t-shirt; eat all six burgers in one week during August for a $250 MMH gift card and a special champion cap; or be the guest who eats the most MMH burgers for the entire month of August to win the 25% friends and family discount at all six restaurants for a year, plus a JuiceLand cleanse. View the complete rules and guidelines here and start eating burgers! All entry cards will be collected and counted by MMH on Tuesday, Sept., 1 and prize winners will be notified via email by Friday, Sept. 4.

• Not to be outdone, Torchy's Tacos has issued a challenge of their own, once again designating August as Some Like It Hot Month with four new ultra spicy tacos. An incendary new taco will debut every week and remain on the menu through the end of the month. There will even be special Firewater libations in the bar like the Torchata. Kick things off with the Barn Burner on Aug. 1; the Bottle Rocket Shrimp comes along Aug. 8; then there's the Creeper on Aug. 15; and wrap things up with the Scalding Pig on Aug. 22. Try them all for #TortureByTaco.

• Local bladesmith and bread baker Guy Harris emerged victorious from his episode of the History Channel's Forged in Fire competition by creating the best Elizabethan rapier. Harris tells us he'll be investing his $10,00 winnings into necessary equipment for his knife and sword-making business, Harris Blades, and possibly upgrading his truck. When he's not turning out loaves for Noble Sandwich Co., Guy is busy making knives and swords for his booth at the upcoming Texas Renaissance Festival this fall.

• We've got some news about chef comings and goings. Garbo's Fresh Maine Lobster (14735 Bratton Ln.) announced the hiring of culinary duo chef Mario Fortuna and pastry chef Alexandra Lee for the brick-and-mortar outlet of the popular business. Stella San Jac (310 E. Fifth), the new Southern-inspired restaurant in the Westin Austin Downtown, introduced executive chef Michael Cerrie to the Austin market this week, while the new-ish Counter 3. Five. VII (315 Congress Ave) disclosed the departure of founding chef Lawrence Kocurek. Chef Kocurek and his family were packing for a move away from Austin when we contacted him for comment, but he promised to keep us posted on his new career move. 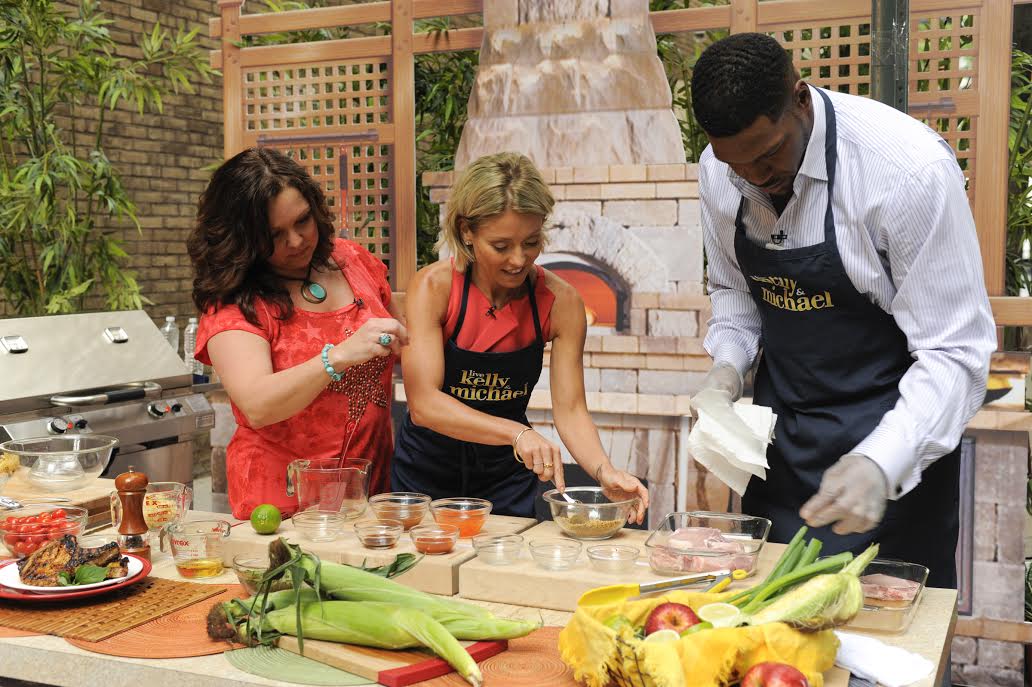 courtesy of Live with Kelly and Michael

• Cedar Park homemaker Chera Little made the most of her three minute grilling segment on ABC's Live with Kelly & Michael on Friday, July 31. Little was the ninth and last semi-finalist in "Live's Search for America's Next Grill Star" contest to cook with the morning duo. Little was chosen for the contest by submitting recipes and a video demonstrating her grilling and entertaining prowess. Her recipe for Asian Grilled Chops with Blistered Tomato Corn Salad appeared to be finger-licking good and she displayed a friendly and kitchen-savvy presence on camera. Now, two finalists will be chosen to appear in a head-to-head grilling battle on Aug. 14 to win a check for $10,000 and the opportunity to share their grilling expertise in five webisodes on the Live website.

• Hang on for a lightning round of local restaurant news! Restaurateur Margaret Vera advises us Fresa's Chicken al Carbon (915 N. Lamar) was closed three and a half days this week due to a failure in the electric meter box at that location, but they're back up and running. . . The Brass House (115 San Jacinto) was able to pay their back rent and will celebrate with a party tonight, Saturday, Aug. 1. . . .The local Z'Tejas Grill outlets are restructuring their debt and all remain open for business. . . .Chef Ned Elliott reports that Foreign & Domestic (306 East 53rd) is putting their morning breakfast and coffee hours on hiatus for the month of August and will reopen with some tasty new features on Sept. 1. . . .Unit-D Pizzeria (2406 Manor Rd) owner Shalou Barth tells us they're gearing up to offer take-out pizza in the near future at the new Cherrywood eatery.

Here are a couple of tasty events not to be missed.

• Barbecue Wife Bloody Mary Mix is hosting a Bloody Mary brunch at Swift's Attic (315 Congress Ave.) to tingle the tastebuds. Creator Catherine Stiles will be on hand and the Bloody Marys will be garnished with meats from Stiles Switch BBQ & Brew. Sunday, Aug., 2, 10:30am-2:30pm.