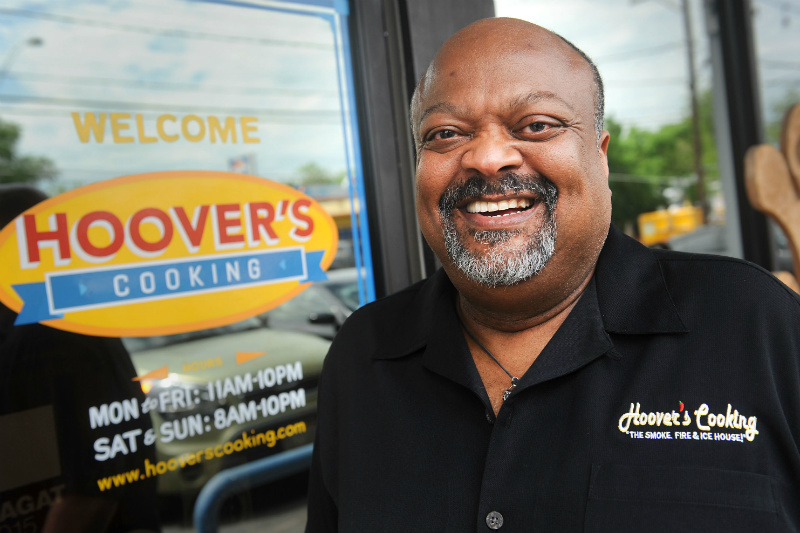 The Texas Restaurant Association held their annual Marketplace Convention in Dallas last week and one highlight of the event was the recognition of outstanding restaurateurs nominated by each Texas chapter of the busy trade organization.

Don "Skeeter" Miller of Austin's homegrown Country Line Barbecue chain is the current president of the Greater Austin Restaurant Association. He was proud to name chef and owner Hoover Alexander and general manager Alvin "Skip" Walker * of Hoover's Cooking (2002 Manor Rd.) as the 2015 Restaurateurs of the Year for Austin.

The hardworking pair weren't able to make it to Dallas for the gala because of a prior catering commitment. However, after they'd finished serving food at the Purple Hull Pea Festival at the deep East Texas former freedman's colony of Shankleville, Alexander raced to Dallas for the final day of the convention while Walters returned to Austin to mind the store.

East Austin native son and UT alum Hoover Alexander grew up around the Austin hospitality business, learning his craft in the Night Hawk restaurant organization and Good Eats Cafes before striking out on his own with Hoover's in 1998. The always humble and self-effacing Alexander told us the most gratifying aspect of the award was the well-deserved recognition it afforded to his indispensable right hand man.

After five years in professional football and 15 years in public education, "Skip" Walker began his hospitality career at Hoover's Cooking in 1999, working his way up from server and bartender to management over the years. These days, in addition to managing the front of the house and the catering operation, he's an active force in the restaurant's community outreach program, speaking to high school students about the value of hospitality careers and supporting non-profits.

Congratulations to both men for their exemplary representation of Austin's restaurant community.

* An earlier version of this story spelled Alvin "Skip" Walker incorrectly. We regret the error.