Event raises over $3,000 for Meals on Wheels 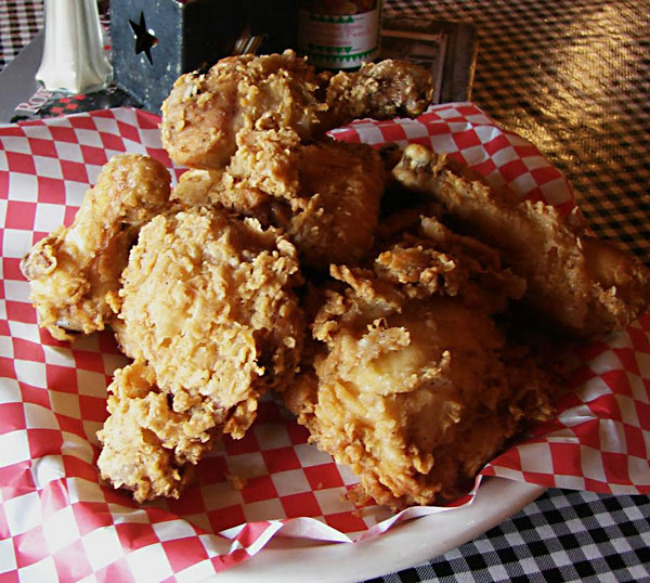 The first annual Texas Fried Chicken Throwdown was held on Main Street in Round Top on Sunday, June 14. Two restaurant teams from Austin competed against two from Houston as well as the host team from Royers Round Top Cafe, Bragging rights reside here this year because an Austin chef emerged victorious.

A couple hundred fried chicken lovers dodged rain showers on the way to the tiny hamlet of Round Top on the day of the event, but the sun miraculously came out just in time for the actual party. Each competitor presented a piece of fried chicken to the judges before serving up chicken and signature side dishes to the hungry crowd. Competing chefs and their dishes were the following:

The judges awarded first prize to Jack Allen's and second place went to Max's. Both restaurants received gloriously tacky rubber chicken trophies and bragging rights for their wins. The People's Choice vote went to Royers Round Top Cafe. The event partnered with Meals on Wheels of both Austin and Houston and donated over $3,000 from ticket proceeds to the worthy non-profit organizations.

In telephone interviews after the event, both chefs Alexander and Key remarked on how much they enjoyed their visits to Round Top. "I love that Round Top is becoming this bridge between restaurants in Austin and Houston and I'm hoping to do more events with my staff out here in the future," said Key.

"We had a great time just hanging out with two guys with the biggest hearts and most beautiful spirits I know - Bud and Jack - they did a marvelous job of making everyone feel right at home," Alexander reported. Host Bud Royer advises us that next year's party will be even bigger and better, so go ahead and plan to be in Round Top on Sunday, June 12, 2016.