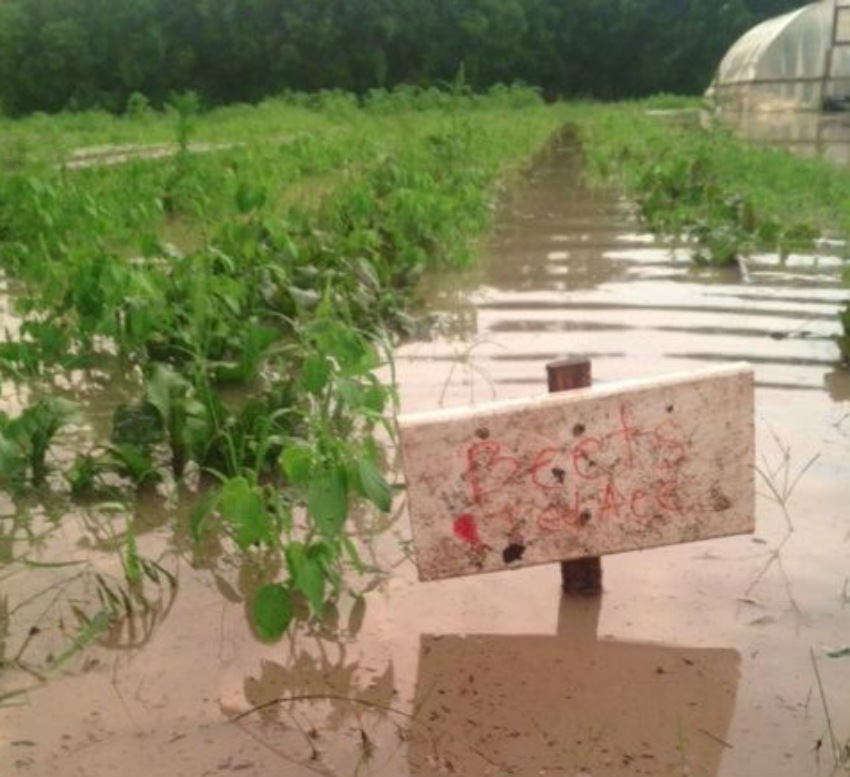 For most of the eight years Austin's Urban Roots youth farm program has been in existence, the aspiring young farmers were taught how people who make their living in agriculture deal with drought conditions and water conservation issues. This week's Memorial Day flooding delivered a different set of lessons.

The farm program provides high school kids with a complete course in farming, from soil preparation and planting to harvesting, cooking, or selling what they've grown. The young farmers sell shares in a Community Supported Agriculture program and also operate a farmers' market booth. Local chefs show up every season to demonstrate how to cook with what they've grown.

According to Urban Roots executive director Max Elliott, the student farmers weren't working due to the Monday holiday, but farm manager Lea Scott was at the farm, (located along a rural tributary of Boggy Creek) around noon to water in the greenhouses and reported to him that everything was fine. As the weather worsened later on Memorial Day, Elliott says he just had a feeling he should go check things out. The hunch turned out to be fortuitous.

"By 5pm, half the farm was under water. The tractor had about six inches of water rising up the tires when I was able to move it and secure the other machinery. Pretty quickly, most of the farm was consumed. There was a foot and a half of water in the greenhouses. By nightfall, Lea and I had to wait for the waters to recede before we could wade across the bridge to go home," Elliott reported.

Tuesday morning, Elliott says he out out a video call for volunteers and about 20 people showed up to quickly harvest the inundated crops and wash the produce. "Since Tuesday morning, we've harvested over 2,700 pound of produce and 2,000 pounds of that has been donated to Serafina, Caritas of Austin, and Travis County Health & Human Services, all hunger relief organizations," Elliott said with pride.

In addition to harvesting produce for the charitable donations, the crew also filled their CSA boxes for Wednesday delivery and began harvesting for their Saturday booth at the Downtown Farmers' Market. The flooding taught them yet another fundamental lesson about working in agriculture – farmers have to make the most of what Mother Nature deals out, often as quickly as possible.