Grilling with Tim Love (Photo by john Anderson)
After a substantial investment in the refurbishment of the lakeside park, the Austin Food and Wine Festival moved back to Auditorium Shores this year with positive results. There was convenient handicapped parking and lots of cab and pedicab service from Downtown hotels.

An abundance of sunshine helped dry out the sod left damp by overnight rain and the park was easy to navigate, even on my scooter. Strategic expansion of the Grand Tasting tents allowed for easier traffic flow and the better separation of the seminar tents meant less noise interference during presentations. Tim Love's always boisterous hands-on grilling demos were located facing the lake, providing attractive views as well as necessary noise abatement.

Some of the new chef showcase participants didn't choose to serve items that held up well in the outdoor tasting format, but there were plenty of standout samples, nonetheless. Chef Love announced the upcoming arrival of his Lonesome Dove Bistro in Downtown Austin with tasty grilled lamb lollipops, while locavore chef Jesse Griffiths of Dai Due turned out achiote lamb tacos with charred leek salsa in homemade tortillas.

Stiles Switch BBQ & Brew introduced themselves to a whole new clientele with their substantial sampler plate and the signature venison chili Frito Pie from Ranch 616 was as big a hit as always. My favorite savory bite from a local artisan vendor was the chile lime pistachios from AustiNuts – I will definitely be using some of those in my next batch of cheese wafers. 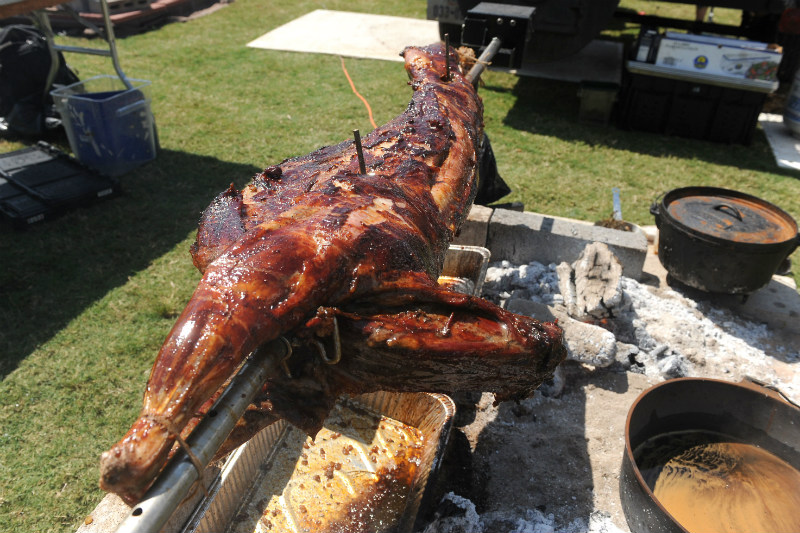 One of the fire pits (photo by John Anderson)

Restaurateurs Ben Edgerton and chef Andrew Wiseheart used their fire pit appearance at last year's fest to reveal the concept of their upcoming vegetable forward restaurant Gardner. This year, they were once again firing up interesting vegetable treatments to an appreciative crowd. The Gilmore family of chefs was not to be outdone in the fire pit arena, however, as father and sons (and that Sam Elliott look-alike) served toothsome barbecued goat and spicy grilled shrimp to long lines all afternoon.

Paul Qui and his East Side King/qui team demonstrated the depth of their talent roster by working fire pits both days as well as serving food at both the nighttime Taste of Texas and Rock Your Taco events. If there's a busier young man in this town than Qui, I don't know who it is. (Oops, unless it's Aaron Franklin, who was nowhere to be seen at this year's fest.)

Local ice cream and gelato makers were well-represented in the tasting tents, just in time to provide refreshing spring-flavored respites from the heat. Lick was scooping lemon lavender ice cream with fresh strawberry sauce while just down the row, Dolce Neve was offering a strawberry sorbet, their perfect pistachio gelati, and a chamomile infusion with a pistachio crumble. We're told both companies had new flavors on Sunday.

Meanwhile, on the back row, Matt Lee and his team from Téo Gelato were sporting t-shirts emblazoned with the news they'd been named one of the top five gelatos in the world at the World Gelato Tour finals in Rimini, Italy in 2014. They were serving Poteet strawberry sorbetto, chocolate rosemary gelato, and the peanut butter and chocolate hazelnut gelato that got them into the tour finals last year. Lee also shared the news that he'll be stocking the H-E-B store in Westlake Hills with select pints as soon as the packaging and labeling process is completed. Macarons were very much in evidence in this weekend. The Baked by Amy's booth offered a huge, colorful display of the delicate French treats in flavors such as lemon basil, salted caramel, and Mexican vanilla, all of which are available in their Northwest Austin store. Several rows over, the bakers from Walton's Fancy & Staple showed off a fondant-covered wedding cake in their booth and served tiny chocolate ganache-filled cream puffs and petite red macaron decorated to look like strawberries.

The most unexpected sweet bite I encountered was presented by Anna Aldridge, also known as the Maple Syrup Lady. Aldridge sells her family's artisan maple syrup produced in Blanchard, Michigan, at local stores and farmers' markets. She explained that her family's syrup is processed in a wood-fired evaporator rather than over a propane fire, which helps maintain a rich, caramel flavor. Though Anna goes home to Michigan every year to help her family with the syrup processing, she's more than happy to make her home in Austin, saying “This way, I'm still a producer of the product, so I can participate in some farmers' markets, but I never have to shovel snow!” In addition to sips of syrup, she was also sharing bites of soft whipped maple sugar candy that dissolved dreamily on the tongue. 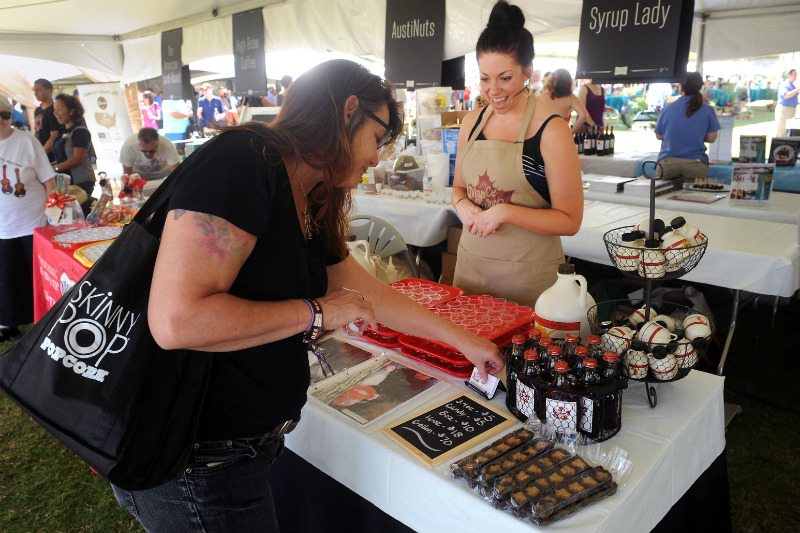 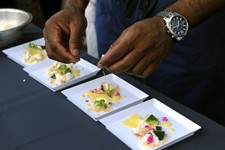