• Chauncy James' mixology team from Garage (503 Colorado) won the Official Drink of Austin competition hosted by the Austin Food & Wine Alliance at Fair Market Thursday night. Their Indian Paintbrush will be Austin's official drink for 2015. It edged out the Don Brimstone whipped up by Chris Bostick's team from Half Step (75 1/2 Rainey). Cheers to them all!

• The Wheel (1902-B E. MLK) is now open, making the corner of East MLK and Chicon an even more happening spot. The bicycle-themed bar from the owners of the Mean Eyed Cat and Jack & Adam's Bicycles is open daily from 4pm-2am. The cozy little Wheel offers beers on tap and craft cocktails, some of which are named in honor of the owners daughters. The bar shares a busy corner with a new JuiceLand outlet in the former Wet Whistle space and the Austin Daily Press sandwich shop. The Wheel (Courtesy of Cultivate PR)

• Spartan Pizza's eagerly awaited first brick and mortar outlet is set to open Monday, March 2, on the street level of the new Corazon development (1007 E. Sixth). Husband and wife team Jeremy and Nicole Portwood developed their distinctive pizza stylings preparing pies for their family and then started their business in a reconditioned Spartan trailer a few years back. The new 1,000 square foot store will feature an expanded menu with appetizers, sandwiches, salads, beer, and wine. Although the new spot has space for some indoor seating, the primary focus will be on take out and delivery. Spartan will be open for lunch and dinner service.

• The SFC Farmers' Market East moves to a new permanent location this week at 2921 E. 17th where street parking and some lot parking will be available to shoppers. Festivities to celebrate the move include live music from Choctow Wildfire, plenty of kids activities, and a Taste-Off between operating manager Matt Macioge and regular market vendor Rick Cruz. Tuesday, March. 3, 3-7pm. 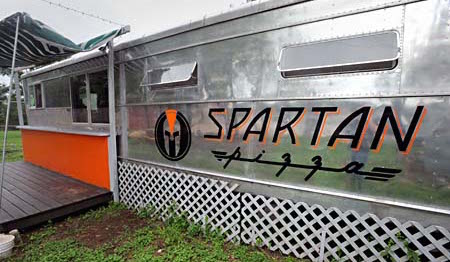 • Chef Iliana de la Vega has announced a new menu at El Naranjo (85 Rainey). We've got our eye on the selection of botanas that includes Camarones al Chirmole ($14 for shrimp in Yucatecan black pepper sauce served with fresh corn tortillas) and antojitos such as the Queso Asado Relleno $18, a baked Oaxacan cheese stuffed with shredded pork or mushrooms covered in a tomato chipotle sauce). El Naranjo is open for dinner Tuesday-Saturday from 5:30-10pm and Sunday brunch from 11am-2pm.

• Odd Duck (1201 S. Lamar) has launched an approachable new lunch menu that now includes sandwiches and a distinctive burger. The burger ($15) is made with wood fire-roasted Richardson Farms ground brisket dressed with a tasty paste of bleu cheese and green chile mayo, plus lettuce, and onions on a Parker House roll. Also look for new soups, salads, in addition to a mouth-watering selection of desserts, such as a carrot cake doughnut with coconut rum ice cream that has my name all over it. Dishes slated for the forthcoming late night menu will also make guest appearances at lunch as they are being developed. Odd Duck is open for lunch Monday-Friday from 11:30am-2:30pm.

• Chef and cookbook author Adan Medrano returns to Austin to offer a class featuring the foods of his culinary heritage as described in his book Truly Texas Mexican (Texas Tech Univ. Press, $29.95). If his presentation at the Texas Book Festival in October piqued your interest in his food, the $50 class at the Central Market Cooking School (4001 N. Lamar) still has spaces available. Call 512/206-1014 for reservations. Monday, March 2, 6:30-9pm

• Foreign & Domestic (306 E. 53rd) has expanded their brunch offerings since pastry chef Siobhan Perstis joined their team. Be sure to check out her pastries and have a new blood orange mimosa while you're there. Saturday and Sunday brunch, 7:30-11:30am.