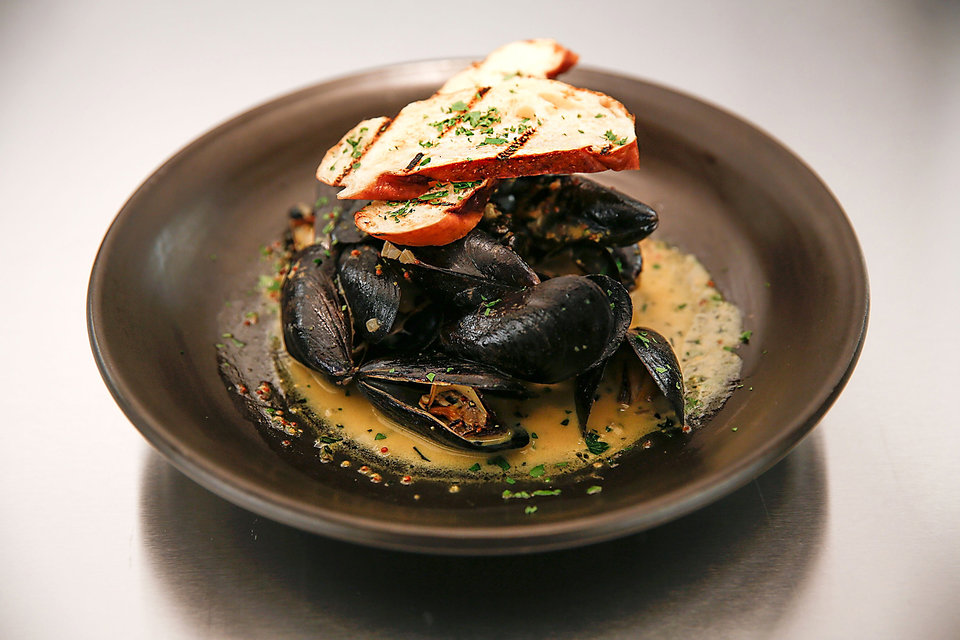 Black Mussels from Porter Ale House (Courtesy of bravotv.com)
Last week, Austin's popular new Porter Ale House & Gastropub faced off against Miami's equally hot Tongue & Cheek in a battle of burgers and bar food. For the first time this season, neither team managed to pass the two-hour pressure test. A strong performance in the finale would determine the winner.

Porter Ale House is the brainchild of friends Joe Bixel, Neil Joiner, and Trevor Lane, who met working in the New York City restaurant scene and chose Austin as the home for their first independent eatery. Cooking school and fine dining alums Bixel and Joiner handle the kitchen while former home brewer Lane runs the front of the house. Open less than a year, Porter's tasty pub grub already has an enthusiastic following and their burger has garnered national media attention.

The same is true for Miami's Tongue & Cheek, the first restaurant and bar from veteran fine dining chef Jamie DeRosa and his general manager Gustavo Rech. Their distinctive craft cocktail program and beef cheek burger have generated plenty of media attention over the past year. The two teams seemed to be very evenly matched.

The 30 pressure test diners found Tongue & Cheek's craft cocktail menu so inviting they all ordered cocktails. Rech's voice-over explained that each cocktail took one to two minutes to prepare and he only had one bartender working the test, so drink orders were slow getting out. For some reason, no food orders were turned in to the kitchen until everyone had their cocktails and this ate up valuable time during the two-hour pressure test allotment. It also caused a serious backlog in the kitchen when orders finally began pouring in.

Host and head judge Tom Colicchio pointed out that better attention to staffing and communication between the kitchen and the front of the house would have avoided the problem altogether. When orders finally began arriving in the kitchen, the staff was quickly deep in the weeds while half the dining room sat without food. Colicchio felt so bad for them, he looked at the camera and admitted he was tempted to pitch in and help.

Though the diners who got food were seemingly very impressed with chef DeRosa's cooking, the two-hour pressure test ended before all the guests were served everything they'd ordered. Afterwards, Colicchio spoke with DeRosa and Rech, saying "Please tell me that wasn't a regular service?" The Tongue & Cheek owners assured him they would work on their staffing, timing, and communication problems before the head-to-head dinner service competition in New York.

After Tongue & Cheek's meltdown in the pressure test, it looked as though the title was Porter's to lose. The evening got off to a great start with Trevor Lance turning on his Texas good ol' boy charm, making the test diners feel right at home. The upscale bar food came out of the kitchen smoothly and diners were favorably impressed with both the burger and the wings. A few tables sent back orders of mussels, and while they were quickly replaced with another choice and deleted from bills, Tom Colicchio wondered out loud why neither of the chefs chose to actually stop and taste the dish to diagnose the problem.

That glitch aside, the service appeared so well-executed that Colicchio was in the kitchen congratulating Neil Joiner and Joe Bixel when the tell-tale ticking of the point of sale machine announced the arrival of a final dessert order. With only 30 seconds left to go on the pressure test clock, the kitchen scrambled to plate up the signature chocolate stout brownie and some house made popsicles, but they didn't make it. It turned out a server had neglected to get the dessert order in a timely manner and manager Trevor Lane took responsibility for the snafu. Though the Porter team was chagrined not to pass the pressure test, they appeared confident about their chances in the New York finale, with Joiner saying "All we have to do is be consistent, do what we do, and execute well."

In meetings with both teams before the head-to-head dinner service in one of his New York restaurants, host and head judge Tom Colicchio made it clear to them that although neither restaurant had chosen to serve their famous burgers in the finals, he expected them to "serve the food that best exemplifies your restaurant" in order to win.

DeRosa and Rech of Tongue & Cheek brought their A game to the finale, showcasing some crowd-pleasing, rustic dishes from their regular menu and making sure food and cocktails got to the tables in a timely manner. DeRosa upped the hospitality quotient a bit by stopping at tables to greet diners, which was a nice touch.

While the Tongue & Cheek team was delivering a stellar performance, the Porter team had chosen to change the focus of their food. Since the two Porter chefs met working in New York luxury hotel kitchens, they decided to pay homage to their roots and celebrate a triumphant return to New York by creating new dishes that highlighted their technical skills.

Bixel and Joiner opened with pumpernickel crepes with smoked salmon and horseradish cream and followed that with what they called a shepherd's pie, though it was a deconstructed affair with pea puree and a short rib marmalade topped with a pierogi. While Tom Colicchio and some of the diners found the odd dish tasty, no one recognized it as shepherd's pie and Tom wondered aloud why they had chosen to serve food that was so different from what he'd eaten on his visit to Austin. The Porter team had made a fatal mistake - they'd overlooked UT Coach Darrell Royal's famous admonition to always "dance with who brung 'em."

When it came to pass judgement, Tom Colicchio lauded both teams for having more success in the finale than they had shown in the pressure test but said "one restaurant did a better job of representing who they are, and that's Tongue & Cheek. Porter Ale House, you veered off brand; you didn't do the food that brought you here."

This means that of the four Austin restaurants featured in the series, only Barlata Tapas Bar is moving on to the semifinals later in the spring. We'll keep you posted on that air date.