When Elaine Martin, Dorsey Barger, and James Lance opened a restaurant on Manor Road in 1988, they had no grand designs about becoming the anchor tenant of a busy restaurant row or pioneering the local garden-to-table movement. They did both. 25 years later, Elaine Martin and Eastside Cafe are still there.

The three friends hatched a plan to open their own restaurant while working together at the original Good Eats Cafe on Barton Springs Road. Austin was in a real estate slump at the time and the trio considered several empty spaces before settling on a Twenties-era Craftsman bungalow that had been home to the short-lived Carla's restaurant. Artist Carla Blumberg had opened an Austin eatery in order to sell the vegetables she grew on a farm outside the city. She purchased a house and three surrounding lots in the 2100 block of Manor Road and opened her restaurant with a large garden behind it in the mid-Eighties.

Blumberg's vision was certainly prescient, but no dining scene was established east of the freeway. That plus her complete lack of hospitality experience had doomed the venture. The property was ripe with potential and made an attractive venue for three aspiring young restaurateurs.

Martin, Barger, and Lance leased (and eventually bought) the property from Blumberg and set out on an odyssey at the place they christened Eastside Cafe. They divided the labor based on their talents and experience. After years of cooking for other people, Martin would become the chef of her own kitchen, Barger became general manager, and Lance put his gardening experience to work outside and helped out with service on the floor. In-house pastry chefs were rare in those days, so they bought desserts from my wholesale dessert business.

The first year was pretty lean, but then Eastside Cafe became a dining destination for nearby UT faculty, staff, and students while folks from the rest of the city began to discover it on their way to and from the old Mueller Airport. Martin's flavorful, unfussy cooking was a major attraction, Barger and Lance made guests feel at home in the dining room. Everyone was charmed by the cozy cottage setting with a refreshing, bucolic garden just across the parking lot.

As business prospered, they added a patio under the sheltering oaks on the east of the house but soon enclosed it to offer year-round seating in what is called the garden room. Lance left the partnership early on and a succession of folks have contributed their gardening passion to the business over the years. Martin recalls that artist and master gardener David Kolasta 's tenure in the garden was particularly fruitful. Not only did he increase the garden's output, he also designed artistic gift items such as t-shirts, recipe, and gift cards based the flowers and vegetables that grew there. “It was David who convinced us to open the garden shop Pitchforks & Tablespoons in the parking lot,” Elaine says now. The little store would sell garden-related gifts, cookbooks, and other Eastside Cafe merchandise for several years and is currently home to the restaurant's take-out shop.

Eastside Cafe's garden has always been a major attraction and Martin considers herself lucky that one of her assets has been so well-tended, though she recalls one gardener who often had a difficult time parting with the produce after she'd grown it. “Our former soup chef, Ruth Carter, would have to go out there some mornings and fight for vegetables to make soup,” Martin says, laughing. As much as she values the garden, Martin will be the first person to dispel the popular local myth that it provides all the produce necessary to run her restaurant kitchen on a daily basis. “There's no way a restaurant with a fixed printed menu like ours could operate out of that garden alone. The weather can be crazy. There are two major growing seasons with long gaps in between, so sometimes you get lots of one thing all at once, like tomatoes, or zucchini, and then go through all the hot months without key ingredients, like spinach or lettuces,” she explains. Herbs and edible flowers are the most hardy and reliable things to come out of the Eastside garden and the items that most regularly show up on the plates inside. Seasonal greens and vegetables become soups, salads, side dishes, and entree specials when they're available. After a couple of blast furnace summers and a few years of continuous drought, Martin says the garden's output is down these days but, “we make the best use of it we can.”

The kitchen at Eastside is Martin's domain. The restaurant is respected for the simple quality and consistency of the food and she finds that her regular clientele becomes very invested in their favorite items. “Every time I try to change the menu, it's like there's an open revolt. I'm not cutting-edge and I can't really raise my prices, but we're still here,” she says with satisfaction. The food is so highly regarded by regulars that Eastside has put out several successful, self-published cookbooks during the 25-year lifespan: Inside the Eastside, Eastside's Inside Secrets, Soup Yourself, Soup Someone Else, and Fresh & New, Tried & True were all written with former soup chef Ruth Carter, while Sweet Sensations was written with Susan Conroy. The recently reissued Fresh & New, Tried & True is the only one of the Eastside recipe collections currently still in print, but occasionally one of the rare keepsakes will turn up on the shelves at Half Price Books. Keep an eye out.

During their long partnership, Martin was always perfectly comfortable with Barger being the public face of the restaurant, preferring the privacy of her kitchen. Early on, she chose not to go the celebrity chef, charity circuit route, but has always made sure to see that some of Eastside's resources are used to support causes near to her heart. Since buying Barger's half of the business in November of 2011, Elaine has opened a clever takeout shop called Elaine's Pork & Pie that sells wonderful pulled pork sandwiches, a few varieties of tasty individual pies, and some of the best frozen lemonade on the planet. She's just added daily soups to eat in or take out to the shop's lineup and she's pleased with the reception.

During her long tenure in East Austin, Martin has watched Manor Road develop into a diverse and bustling restaurant row and generally feels the more, the merrier. In fact, now that it's rumored a mixed-use development including a restaurant and some retail could possibly be going in one block to the west, she says, “my retirement dreams just got made!” Look for Elaine Martin to be at Eastside Cafe for a long time to come. 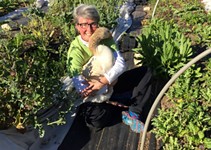