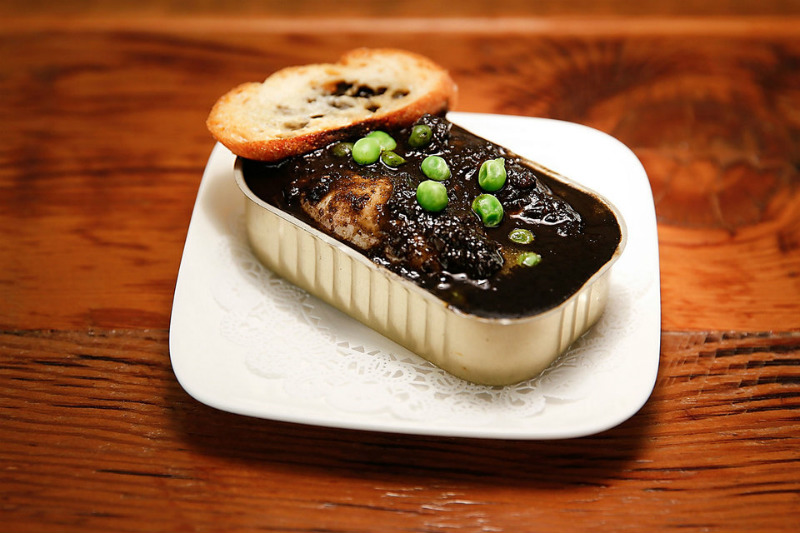 Both the casual restaurants featured in this episode are run by married couples, one of whom runs the kitchen and the other a front of the house manager. Winning would hinge on each partner's skill in their own domain as well as their ability to work together as a team. Strategies for dealing with the pressure test and the ability to make on-the-spot service adjustments proved to be every bit as important as putting out high-quality food.

After operating Spanish tapas spots in San Francisco and Oakland for several years, chef Daniel Olivella and his wife Vanessa Jerez chose to open a restaurant in Austin because “it's a town for families,” and working here makes it possible for them to focus on their family while operating a business. Their respect for each other's skills creates the synergy reflected in both their food and hospitality. Austin's Spanish food aficionados love the authentic dishes from Daniel's Catalan homeland and the casual, welcoming atmosphere Vanessa creates at Barlata Tapas Bar (1500 S. Lamar) has already earned the young eatery an enthusiastic following. Host Tom Colicchio and the judges commented on the incredible flavors of the food.

Daniel's initial strategy of instructing his servers to submit each table's entire order at once rather than staggering the courses during the pressure test overwhelmed the diners with too many dishes being delivered at the same time. Although the expert kitchen was able to keep the food quality high while putting out such a high volume of dishes with speed, Vanessa quickly noted the service problem and had the kitchen and servers slow down the process.

Colicchio was duly impressed with her seamless solution to the problem and the diners raved about the quality of the food. Even the mystery diners with the hidden cameras were pleased with their server's reaction to questions about the possible local provenance of some ingredients (the chickens and eggs are Texans) and her immediate offer to replace a dish with which they weren't satisfied.

In his summation of the experience with Daniel and Vanessa, Tom Colicchio gushed that Barlata has “one of the most efficient kitchens I've ever seen. This restaurant is really dynamite. Great food, great service, and amazing hospitality. It was a great experience for us and obviously a real passion project for the two of you; being here was like walking into someone's home.”

Veteran chef Rocco Carulli gave up his yearly summer restaurant operation on Martha's Vineyard and chose to relocate his operation to an emerging arts district in Miami. Once there, he met and married young British lawyer Owen Bale and the two of them now operate the casual global cuisine restaurant R House. While Rocco's strategy of working the front of the house during the pressure test to compensate for Owen's lack of restaurant experience firmly established him as the face of R House, the plan of serving drinks to all the tables before submitting any orders to the kitchen created havoc for sous chef Nuno Grullon and his staff. A full 45 minutes into the two hour pressure test, there were still diners who hadn't received any food, and then the kitchen was stressed trying to get everything out in a timely manner.

Most of the diners appreciated the eclectic choice of international dishes, but there were some definite glitches with the food. A few guests were served plates with mushrooms when they had specifically asked that the fungi be omitted, and everyone who ordered the signature chocolate truffle cake sent it back because it was extremely salty. It turned out the cook who prepared it used three tablespoons of salt instead of three teaspoons, rendering the dessert all but inedible.

Host Tom Colicchio is a stickler for chefs tasting everything that goes out of their kitchens, and this big misstep prompted him to say, “Before a big competition like this, the kitchen should have tasted everything on the menu before it made it to the dining room. If something is your signature item, it's got to be done right.” The mystery diners experienced service problems that also contributed to the R House team's overall stumble in the first two rounds.

Both restaurant teams presented a dinner service at one of Tom Colicchio's restaurants in New York. While the R House kitchen experienced redemption with the correct version of the chocolate truffle cake, and the judges were not as wowed by the flavors of Barlata's food in New York as they were in Austin, excellence in the first two rounds delivered the win to Daniel, Vanessa, and Barlata. This makes it the first Austin restaurant in the competition to move on to the semifinal rounds later in the spring.

Be sure to watch Best New Restaurant on Wednesday, Feb. 18th at 9pm when Austin's Porter Ale House Gastropub (3715 S. First) engages in a battle of burgers and bar food with Miami's Tongue & Cheek.