First Plates Extra Helpings: The Best Chicken-Fried Steak Is the One in Front of You 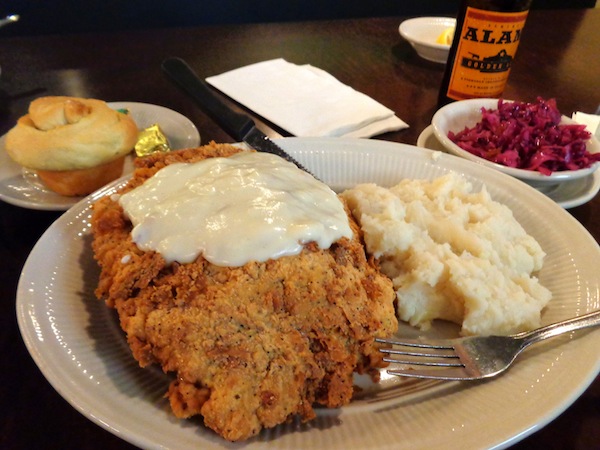 When I was a kid, chicken-fried steak was my favorite restaurant food. A big slab of meat encased in batter and fried, accompanied by a big scoop of mashed potatoes and green beans, was the perfect meal. With everything smothered in white gravy, the dish contained all of the major food groups for a growing boy.

CFS was my choice any time my parents felt flush or brave enough to take six kids to a restaurant.

I still enjoy a good, and not so good, CFS every now and then. It’s often a benchmark comfort food for me when visiting an unfamiliar eating establishment. If a restaurant makes a good CFS, I extrapolate that the rest of their menu is also above average. There are CFS connoisseurs who search diners of the South for the best CFS. I’m not one of them. For my money, the best CFS is the one in front of me, the second best is the next one I’m going to have, and third best is the one I had yesterday.

Former Austin Chronicle food editor, Robb Walsh, divides CFS into three categories. The East Texas version is a tenderized steak dipped in egg and flour, similar to how Southern fried chicken is prepared. The version from Central Texas draws from the area’s German heritage to use bread crumbs instead of flour, similar to Wiener schnitzel, and uses round steak rather than veal. In West Texas the preference is to dip the beef into milk and flour without the egg like a gussied-up pan-fried steak.

Over the years, there have been nearly as many modifications to CFS as there are kitchens preparing the hearty meal. To be an authentic CFS, the meat should be round steak pounded thin, and then dipped in a bath of milk (preferably buttermilk) before being covered in a mixture of flour, salt, and pepper. A true CFS should be pan fried, not deep fried, to a golden brown. The drippings are used to make the white gravy.

The most authentic CFS I’ve found is at Mary’s Cafe in Strawn. At this country cafe, the steak is the size of two hands, the breading is modest, and the meat is nearly tender enough to cut with a fork.

Like many culinary traditions, food historians argue over the origins, but most agree on the basic reasons for a particular method of preparation. CFS takes a tough cut of meat, beats it into submission and dresses the meat in a coating of batter.

According to Texas culinary legend, a little cafe in the Panhandle town of Lamesa was the site of American food history. The story was largely perpetuated by journalist Larry BeSaw when it was published in the Austin American-Statesman on Jan. 11, 1976.

According to BeSaw, chicken-fried steak began on a winter day in 1911 at Ethel’s Home Cooking cafe in Lamesa. Jimmy Don Perkins was working as a short order cook at Ethel’s, when a waitress wrote an order for “chicken, fried steak.”

Poorly educated, Perkins didn’t comprehend the meaning of the comma during the lunch rush. Not thinking much about it at the time, he coated a steak in fried chicken batter and threw his name into the cooking hall of fame.

The mistake might have been overlooked, except diners began asking for the new concoction and Ethel’s became the most popular restaurant around. Ethel’s is long gone now, but every chef in Texas seems to want to put their signature on what began as a simple mistake.

Unfortunately, the story did not end well for Jimmy Don. BeSaw wrote that the cook was soon fired from Ethel’s after a dispute over a waitress’ affections. He was later found dead under mysterious circumstances in a Lubbock alley, never knowing his place in food history.