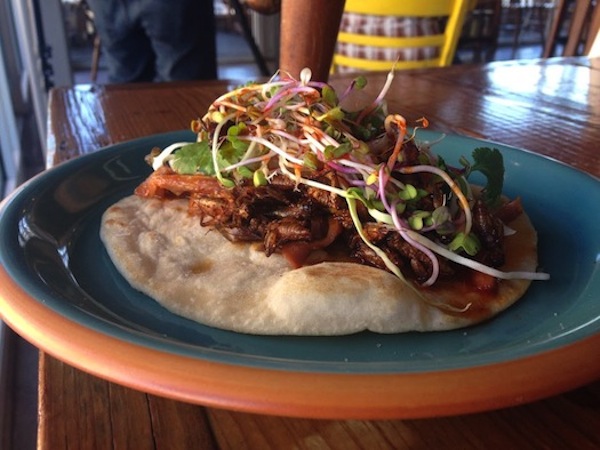 Cricket tacos, not yet on the Odd Duck menu.

Can’t do an all-encompassing sort of food showcase these days, especially not in Austin, without mentioning what’s going on in the entomophagy scene.

E-n-t-o-m-o-p-h-a-g-y. That’s, you know, the eating of insects – after they’ve been ground to a fine powder or left whole and cooked, often prepared in tasty new ways, often by the kind of celebrated chefs who know what they’re doing when it comes to anything edible.

We’ve covered the progress and the events of local entomophagy movers and shakers Little Herds and World Ento in the past, and so here we check in with Little Herds’ Robert Nathan Allen to get the flour-dusted scoop on the latest – and he introduces us to the company’s incoming executive director Dan Von Pasecky.

Austin Chronicle: So, ah, what’s up in the world of bug-eating lately, RNA? How go things with Little Herds?

Robert Nathan Allen: Well, the cricket farm is going well – we’re continuing to expand on that side – and we’ve had a lot of interest from local chefs. Some of them have been experimenting with crickets and doing really cool things with them. At Barley Swine, they’re doing a miso and a fish sauce with them – it’s not on the menu, but they’re checking it out. And the guys at Odd Duck have done pig-ear-and-cricket tacos.

AC: Sounds like you’re in with that Bryce Gilmore.

RNA: I actually didn’t meet Bryce until later, but I reached out to them, and Odd Duck’s Mark Buley got in touch with me. And their chef Sam Hellman-Mass is actually the mentor for our Aspire team in UT’s Food Lab Challenge.

AC: Who else in this town?

RNA: I met Josh Jones, one of the co-owners and butchers of Salt & Time, while attending the Slow Food Conference in Italy. The international audience there was incredible, and the U.S. slow food people – especially the Denver chapter – were really excited about incorporating edible insects into the discussion. So I had a fantastic experience there, met Josh and got to put the bug in his ear –

RNA: Yeah, and so Salt & Time tried out a mortadella that was studded with roasted crickets – to give it a little crunch? And it worked beautifully, and now they’re experimenting with a couple of other things. And, let’s see, Todd Duplechan of Lenoir, Rick Lopez of La Condesa, Alexis Chong of Sway, and Uchi’s Michael Castillo – they’ve all been experimenting with bugs, too. And, beyond experimenting, I got confirmation last night that Jesse Griffiths of Dai Due has actually been running the crickets as a special. And, in March, Sonya Coté will be cooking for the Future Food fundraiser at Little Pink Monster Gallery. So we’ve got all these great chefs trying out a lot of different things.

AC: And you’re doing things beyond Austin, too, is that right?

RNA: Across the board, we’ve got plenty of exciting things going on. We’re working with other groups around the country, start-ups who are doing crowdfunded campaigns. And we’re getting increased interest from educators, people saying “I wanna try this out with my class.” There are a couple of 4-H groups – one from Colorado, one from California – wanting to use insects for a cooking competition for their 4-H kids. And eventually this allows us to collect additional educational materials and curriculum to share with other educators, kind of build up the portfolio of information that people can draw on.

AC: And this smiling guy sitting right here with us, he’s also part of the organization now?

RNA: Absolutely. We now have Dan Von Pasecky as our new executive director, so I’ll be able to support Little Herds from an advisory capacity and can start leveraging some of the power we have with Aspire, to start getting some reach with their projects.

AC: Aspire? That’s the group who, ah, didn’t they win the Hult Prize?

RNA: Aspire was started in 2012 by a group of students from McGill University – from a variety of backgrounds: Accounting, IT, legal, medical – and they submitted an application to the Clinton Global Initiative, which that year focused on combating food insecurity, on ways to effectively feed the world. And that comes with a million-dollar prize. And the Aspire team competed with thousands of other schools around the world, and they ended up winning with their idea of using insects and insect-derived proteins to work with communities who are most in need of this nutritious food source, to help them grow it year-round. And over the course of the next year, they set up a farm in Ghana and a farm in Mexico, growing palm-weevil larvae in Ghana and grasshoppers in Mexico … And the Aspire folks saw that interest in the U.S. was picking up, a lot of people looking for a quality, responsibly farmed source of insect protein – specifically for people. And so they looked around the U.S. to determine which would be the best place to start this pilot program, and decided that Austin would be it.

RNA: It just so happens that there’s a thriving community here already, a company that’s already producing cricket powder – that’s Harman Johar with World Ento. And the Aspire guys saw start-ups like the people at Hopper Foods and the girls at Crickers Crackers, so they tapped me and Harman and Rachael Young from Vermont – she’s part of a group called Eat Yummy Bugs. And Rachael moved down here and the three of us started the Aspire pilot U.S. team, running the cricket farm, producing the cricket powder – and it’s been fantastic. In fact, Aspire’s CEO, Mohammed Ashour, moved to Austin a week and a half ago. So he’s here on the ground now, and things are moving right along.

AC: And Dan, new executive director, how did you get hooked up with all this edible-insect business?

Dan Von Pasecky: The first time I met Nathan was on a double date – he and his girlfriend, me and mine – because our girlfriends – well, they’re our fiancées, now – they were friends. And we were on this date, I think it was at Spider House, and I’d ordered something vegetarian. And Nathan was like, “Oh, how long have you been a vegetarian?” and all that kind of stuff. And he said, “Well, how do you feel about eating bugs?” And I thought he was just, like, poking at me – trying to find some hole in my reasons for being vegetarian, you know? Because people do that. But then he starts telling me more and more about entomophagy, about eating bugs. And I was like, wait, this guy clearly knows what he’s talking about – and he’s totally serious. And I was immediately intrigued.

RNA: And that night we had a great conversation about the philosophical implications of vegetarianism and edible insects.

DVP: And since I gave up meat because of the environmental and ethical concerns – not because I didn’t like the taste of meat – learning that eating insects was actually sustainable, and that you can get around the ethical part, even if you are concerned about killing insects. Because you just cool them until they fall asleep, and then continue to cool them until they expire, and it’s hard to criticize bugs dying in their sleep. So, for me, that was the start of it all.

AC: And now you’re all about eating bugs?

DVP: At first I had that cultural aversion that’s been burned into all of us – but no rational aversion, just a basic “ew” factor to get over. But it was an easy transition, first eating cookies with cricket powder in them, and then the Hopper Bars and the Chapul Bars. And eventually I told my brain, “Okay, you’ve now eaten crickets knowingly, and so what’s the big deal?” And now I’ve eaten them in actual cricket form – as garnishes at the Future Food Salon, and sautéed for that event at in.gredients, and elsewhere. And I’m looking forward to seeing more of it on local menus around town – and that seems to be happening slowly but surely.