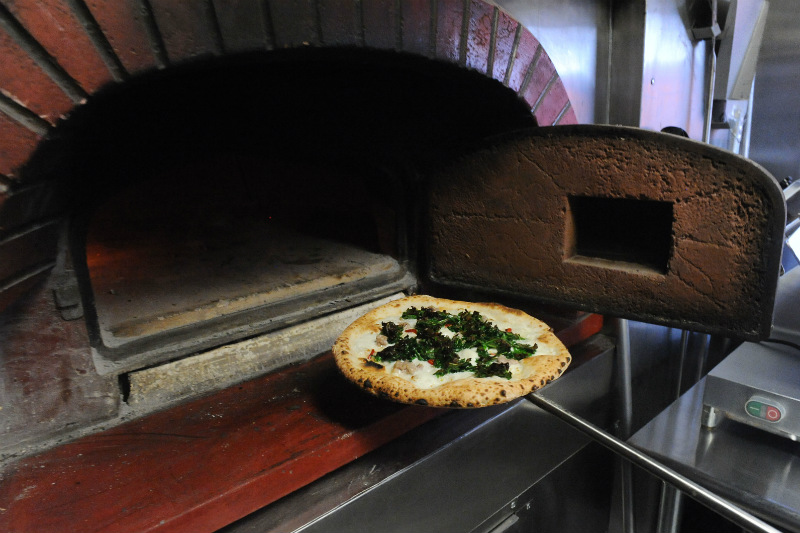 Clint Elmore didn't enjoy practicing law in New York City, so he quit his job to discover and follow his bliss. The loss to the Big Apple's legal community is Austin's gain because the former lawyer is now serving up good Neapolitan pizza from a South Austin trailer.

Though Elmore knew he didn't want to practice law anymore, he applied the same kind of due diligence to making his next career move. He took into consideration how much he had enjoyed spending a summer helping his Ole Miss buddy Brad Orrison build and open the Shed Barbeque in Ocean Springs, Mississippi. Even though his calling might not be smoking meat, Elmore recognized the satisfaction that came from cooking and sharing food with the public. He and his the girlfriend (and now wife), Pearl Schenkel, often enjoyed slices of pizza while they discussed his career options. Eventually they decided there were bound to be cities where she could pursue her career in graphic design and he could make a living selling pizza.

Through online research, Elmore discovered a monthlong pizza-making course at Pizzeria la Notizia in Naples, Italy, taught by pizzaiolo Enzo Coccia. Clint took the course and then he and Schenkel spent some time traveling around Italy immersing themselves in the country's rich culinary culture. Once back stateside in 2010, Clint approached Brooklyn wizard Paul Giannone for a job at the ultra popular Paulie Gee's in the trendy Greenpoint neighborhood in order to hone the skills he'd acquired in Italy. Once Clint had experience with several aspects of the pizza business, the couple relocated to Austin three years ago and set out to create their own pizza restaurant. “We had planned to go brick-and-mortar to begin with, but then we had two leases fall through on us, and once we decided to go with a trailer, the build-out on it took longer than we expected,” Clint Elmore explains. While Schenkel went to work for a graphic design start-up and did all the graphics work for 40 North, Clint worked at Hillside Farmacy. They hosted pizza parties around the Forno Bravo oven in their back yard, testing recipes on friends.

Since mid-December, Elmore's custom trailer has been parked next to Regal Ravioli in a little Italian outpost lot on South First that was once a barbecue haven. The trailer includes a wood-fired oven and though Clint doesn't have to tend fires all night like a pit boss, his distinctive dough requires a two-day process. When the dough is gone, he's done making pizzas for the day.

The pizza crust at 40 North has some crispness and a little char on the bottom from the oven, but the slices are still flexible with some chewiness. The menu is small: a few signature pizzas in the $8-13 range such as a Margherita, a Hot Honey, and one with kale, plus weekly specials; a wonderful farro salad with crisp onions, cucumbers, and tomatoes in a bright balsamic vinaigrette; and a delightfully delicate vanilla bean buttermilk panna cotta with a berry coulis.

The lot offers some parking and picnic table seating, and they'll have some live music on occasional Saturdays. 40 North offers a worthwhile addition to our local pizza landscape. Elmore makes good pizza and was right to come here. There are already too many lawyers in Austin, but we can always make room for another good pizzaiolo.