Homey dive has a local vibe 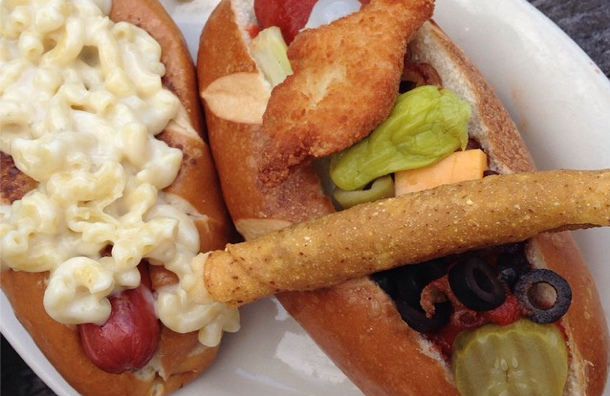 Shane Howard's lifelong dream of opening a hot dog stand was realized after relocating to Austin, the land of food-truck opportunity.

With the help of best friend and chef Sean Boyle, the trailer idea was scrapped for bigger ambitions, and Badlands was born: dive bar slash restaurant slash venue with a locals-only attitude. Austin bands have begun making a home on the stage with weekly residencies, the gourmet hot dog menu sources local ingredients, and the bar only serves Texas beers, wines, and spirits.

"Folks will come in here and ask for a Jack and Coke," says Shane. "I have to tell them, 'I don't have Jack Daniels, but I do have  [Treaty Oak] Red Handed Bourbon.' Or they'll ask for a Bud Light, and I suggest [Austin Beerworks] Pearl Snap instead. Some people don't like that at all," he shrugs. But Shane feels a sense of duty to support local suppliers, who he claims are making some of the best spirits in the country.

Once acclimated, Shane also finds that most customers are receptive to trying something new, and it helps that the Badlands stocks an extensive selection of Texas bourbons. But it's not just about straight spirits. Shane and wife Shannon, who currently share bartending duties, are experimenting with the cocktail menu. The Marfa Mimosa is a refreshing blend of honey whiskey, OJ bitters, and ginger ale. This unique cocktail won't – and shouldn't – be limited to brunch hours.

The food menu is impressive for a dive bar, boasting 22 unique hot dogs and half as many sides. With names like "Jesus Done Left Chicago" (beef frank with Texas jalapeño relish, spicy pickles, and celery salt, on a poppy seed bun) and "Full Monty Python" (banger sausage with baked beans, mushrooms, bacon, and a fried egg), it's obvious that Shane has been planning this menu for a long time. Sean has a lot of fun in the kitchen, as evidenced by his house Bloody Mary ketchup, Jameson mustard, and Guinness glazed onions. "I wanted to make an Irish Car Bomb, but as food," he explains, describing the Wolfhound, which uses the latter two condiments.

The dogs and sausages come from fellow Eastsiders Smokey Denmark, but Sean makes his own falafel-inspired vegan sausage in-house. (Veg heads take note: Any dog can be made vegetarian or vegan, and every side is vegetarian.) All buns are baked fresh daily by New World Bakery. Standards like the American Graffiti (beef frank with mustard, ketchup, relish, and onions) and the Outsider (a perfect chili cheese dog) will only set you back $3 and $4, respectively. For a few dollars more, you can go wild with varieties such as the Frap (essentially a Bloody Mary in hot dog form, loaded with celery, olives, a taquito, and a chicken nugget (!), among other toppings.) The bleu cheese apple slaw with pecans is great as a side dish, but is also a topping on the Deep South, alongside barbecue sauce and chopped smoked pork – by far their most popular dog.

The casual creativity extends to the space. The open floor plan is made intimate with red lighting, upcycled wood, and large works of art on the walls. (The Howards also own and operate next-door Romani Gallery.) They're open to hosting any variety of events; the aim is to provide a space that brings Austin's diverse residents together over good food and drinks. Community is important at the Badlands. A visit on Tuesday night finds it packed for weekly karaoke shindig Queereoke, just one of several LGBTQ-friendly events the venue enthusiastically hosts. Bands interested in playing on their homey stage – a large rug transforms the space into your neighbor's living room – should contact Shannon, who handles booking. She and Shane had run a production company and a small music venue in Iowa before transplanting to Texas, and the couple are thrilled to be back in the live music business.

The Badlands is what you want in a neighborhood dive: good drinks and comfort food at great prices, weekly events at which you'll run into your buddies, and a friendly staff that treats you like family.