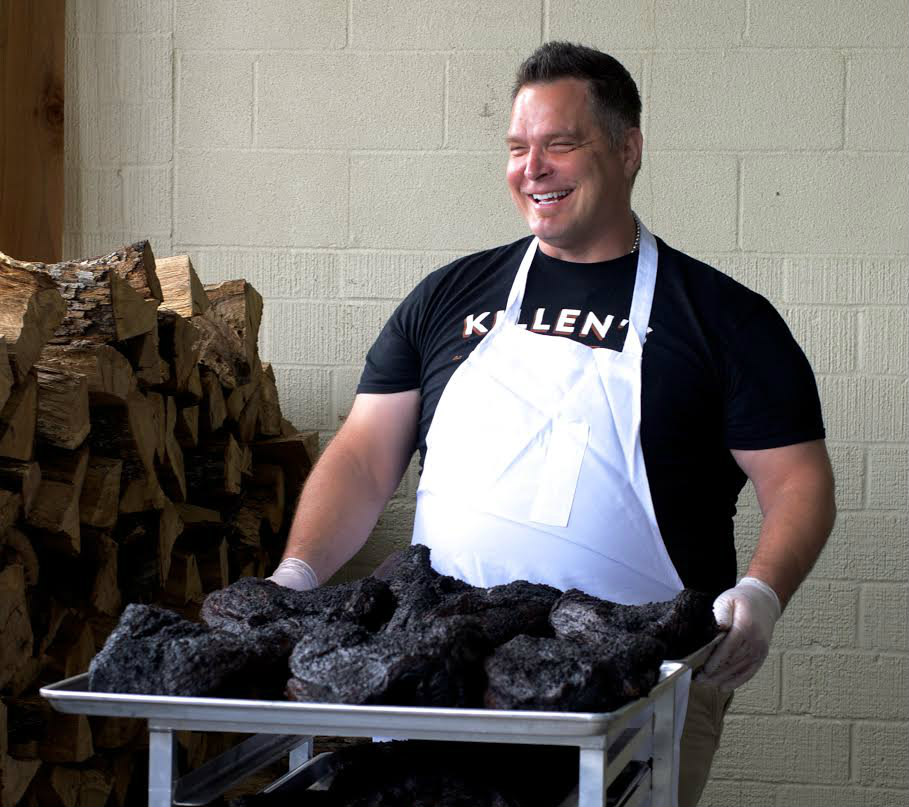 •Killen's Barbecue pops up in Austin on Monday outside Foreign & Domestic (503 East 53rd). Ronnie Killen will be joined at the pits by host Ned Elliott and Wayne Mueller of the legendary Louie Mueller Barbecue in Taylor. Houston's own sugar fairy, Rebecca Masson, will provide the desserts. In true Austin fashion, there will be free beer for folks waiting in line, courtesy of Houston's Saint Arnold Brewing Company. Monday, Nov. 17, 11am until the barbeque sells out.

•Fans of vegetarian soul food will be sad to learn that the vegetarian Nice N Ful trailer (1326 Rosewood) shuttered yesterday. Myrna Nicely-Fulcher and Larry Fulcher are reportedly moving their business to Houston, where they own a home. Ironically, the Chronicle had slated the popular Eastside trailer for a review in the upcoming Thanksgiving issue.

• Royers Round Top Cafe (105 Main St. in Round Top) welcomes chef Jack Gilmore this Sunday, Nov. 16, when he'll sign copies of his new book, Jack Allen's Kitchen: Celebrating the Tastes of Texas (UT Press, $39.95) from noon-3pm. We recommend the fried chicken with a side of Bud's mash before you get to the pies.

• New Mettle (507 Calles) chef Carson Symonds will be partying with the neighbors when he prepares a crab salad and blueberry cobbler for a dinner featuring two courses of meats from John Mueller Meat Company, and a different beer pairing of brews from Hops and Grain Brewery with each course. The party starts at 7pm on Sunday, Nov. 16. Get $50 tickets here.

• Fans of the New Haven-style pies from Salvation Pizza (624 West 34th) will be pleased to hear they are opening a second outlet with an expanded menu, a full bar offering custom cocktails, and an extensive list of craft beers. There will be big screen TV's for sports appreciation and an outdoor dining area. Best of all, the new Salvation Pizza (51 Rainey St.) will be open daily for lunch, dinner, take-out, and delivery. Look for the new Dick Clark-designed eatery to debut in December.

• Mellow Mushroom (2426 Guadalupe) is supporting the Movember Foundation's men's health awareness and fundraising campaign in two ways this month. The national franchise is encouraging customers to Instagram their mustache photos with the hastag #MellowMovember for a 25 cent donation to the noble cause. They'll also donate another 25 cents for every Trimmed 'Stache non-alcoholic beverage and every Full 'Stache cocktail purchased this month.

• laV (1501 E. Seventh) offers a holiday entertaining edition of their Flights & Bites series with small plates (and recipe cards) prepared by chef Allison Jenkins and pastry chef Janina O'Leary, paired with reasonably-priced pours chosen by sommelier Vilma Mazaite. Relax in the wine bar for an event that's half class, half party, and all fun. Tickets for the 24 available spots are $45. Wednesday, Nov. 19 at 5:30pm.

• Houndstooth Coffee's (401 Congress) head coffee coach, Daniel Read, is offering customers the same taste bud education course he shares with all the company's baristas, including the official flavor wheel used in their training. Sign up for the $40 course at either location or online. Wednesday, Nov. 19, 7:30pm