"Come for the drinks. Stay for the tacos!"

That's the motto of the reincarnated Taco Flats. Owner Simon Madera (of Triangle Wine & Spirits) was searching for a venue for his Allandale neighborhood-bar concept when he learned of the long-lamented namesake live-music dive. The new version has been given a makeover but maintains much of that relaxed spirit.

If you were a part of Austin's vibrant music scene in the Seventies, you may remember the original Taco Flats. Perhaps you caught Townes Van Zandt performing on the patio. Maybe you participated in a jalapeño eating contest. You might have come for the drinks ... and stayed for the drinks. Located on Lamar Boulevard, a few blocks away from the modern incarnation, the joint was always a party – so much so that, after eight years of enduring popularity, the place was shut down by the city for failing to maintain an adequate food-to-alcohol sales ratio, per the establishment's restaurant permit. That's not to say that the tacos weren't good, but booze and bands were the bigger focus back then.

At Taco Flats 2.0, Madera moves the food to center stage. The tacos, ranging from $3.50 to $5.50, are based around family recipes and feature classic combinations (al pastor, with spit-roasted pork and fresh pineapple) as well as inventive fusions of traditional ingredients (El Hippie, with grilled Oaxaca cheese, house pickled escabeche, and grilled corn) –  all on homemade tortillas. The menu's inspiration comes from authentic Mexico City dishes, but Madera admits that some items, such as the pair of tacos involving beef fajita, are thrown in to please the palates of Central Texans. "We even had to modify our salsa recipe – it was too spicy for a lot of people," laughs Madera. (It's still got quite a kick.)

Their vegetarian taco can be veganized, and those with a gluten allergy (or diners of the paleo persuasion) can substitute a large, thin slice of jicama for a flour or corn tortilla. The cool crunch was a refreshing variation, regardless of dietary preference. Appetizers, including a rich tomato broth tortilla soup, tostadas de atún (yellowfin with avocado and fried leeks), elote asado (grilled, seasoned corn on the cob), and papas (fries with a side of garlic lime aioli) ensure there's something for every appetite. Weekend brunch promises pozole, breakfast tacos, and cinnamon-spiced café de olla. 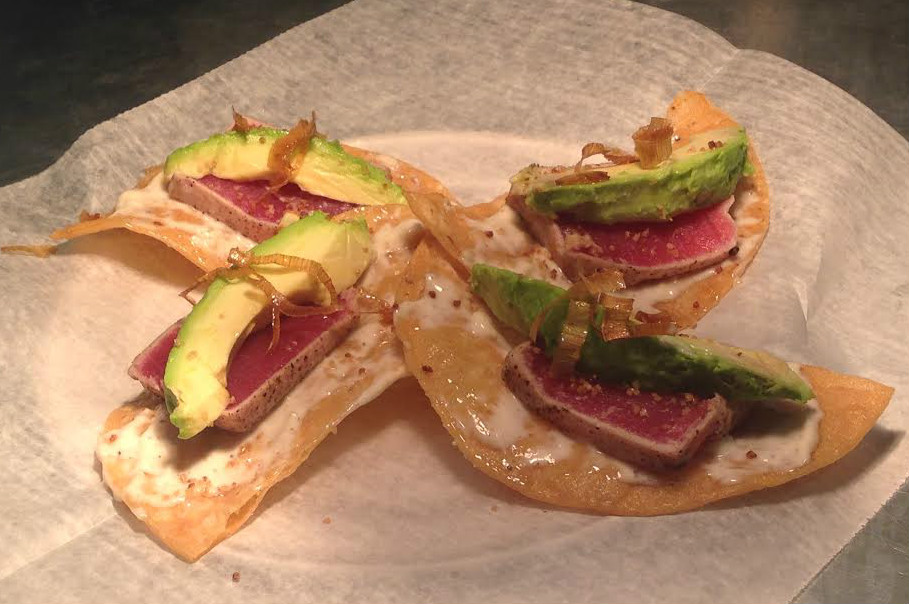 Food orders are placed at the kitchen window, with food runners delivering the dishes all presented à la carte in paper serveware. The experience is redolent of trailer-food dining, but an attentive staff checking in routinely complements the self-service aspect. Drink orders are placed separately at the bar, on the same tab, if needed.

The bar, overseen by Aaron Fresas (Midnight Cowboy, the HighBall), highlights local liquors (Tito's vodka, 512 tequila) in his innovative cocktails. The Setenta y Cinco (Spanish for "75") blends local gin with pomegranate and lime juices for a south-of-the-border take on its "French" counterpart. Four of the nine signature cocktails incorporate mezcal – a welcome sight to fans of this increasingly popular liquor. The bartender recommended the No-Mah-Mes, featuring espadin mezcal, green chartreuse, maraschino liqueur, fresh lime juice, and spicy bitters. He described it as a "mezcal last word."

The restaurant utilizes a variety of seating: tall communal tables, stools around a spacious U-shaped bar, and more intimate 2-3 person banquette tables along one wall. With a shuffleboard table and numerous flat-screens tuned to the Longhorn Network, et al., the space feels half sports bar, half sit-down restaurant.

Next-door neighbor to the Peached Tortilla (slated to open later this fall), Taco Flats is helping this stretch of Burnet Road – coming to be known as "Bur-ro," to the dismay of locals – transform from convenient thoroughfare to dining destination for those looking for high-quality food and drinks in casual, unpretentious settings. 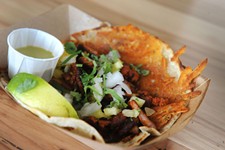