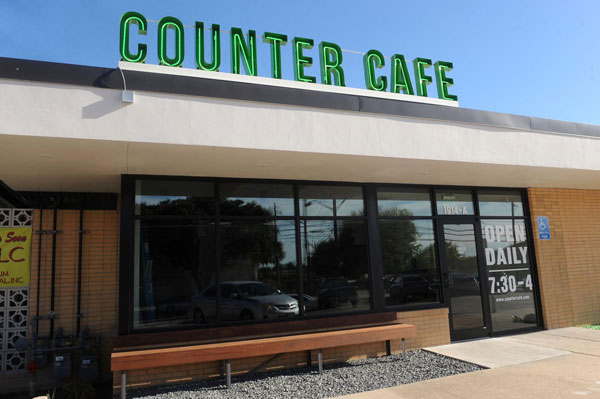 Debbie Davis and her business partners were not about to find themselves casualties of the rapid redevelopment of Downtown, so they were proactive in finding an alternative home for their popular Counter Cafe.

While Davis still has a lease on the original (626 N. Lamar) for the forseeable future and the piece of property that is home to the tiny diner, a small parking lot, and a CompuSigns outlet is not currently slated for development, she wisely began making expansion plans last year. Davis has never been afraid to tackle long-term projects.

When the Austin native returned here from Fredericksburg and took over the former G/M Steakhouse location, she had her work cut out for her. Changes in the surrounding neighborhood and rising property values had contributed to the demise of Gus Vayas' diner in 2005. It took Davis several weeks of thorough cleaning to completely rid the old greasy spoon of the patina of animal fat and stale cigarette smoke that laminated every surface. She opened in the late spring of 2007 and the Old West Austin neighborhood soon embraced Davis' version of the classic diner. It soon became known for fresh, locally-sourced food and a exceptionally good burger. Davis is determined to replicate that success at the new location.

The new Counter Cafe (1914 E. Sixth) is settled in the west end of the former East Austin post office building. A much smaller post office service area is now in the center of the building and the sleek new dinner house, Gardner, takes up the east end. Counter Cafe serves breakfast and lunch until 4pm daily while Garner is open for dinner and late night, allowing for plenty of parking for both restaurants. Talk about efficient redevelopment!

A couple of weeks ago, we dropped in to check out the facilities and found Davis, her new business partner Doug Kissner, and culinary partners Nick and Steve Cruz tying up loose ends and preparing for the soft opening. The Cruz brothers were exceptionally proud of the new kitchen, saying "We measured everything down to the fraction of an inch to make sure all the new equipment would fit. Our guys are excited about having this much room to work in for a change." 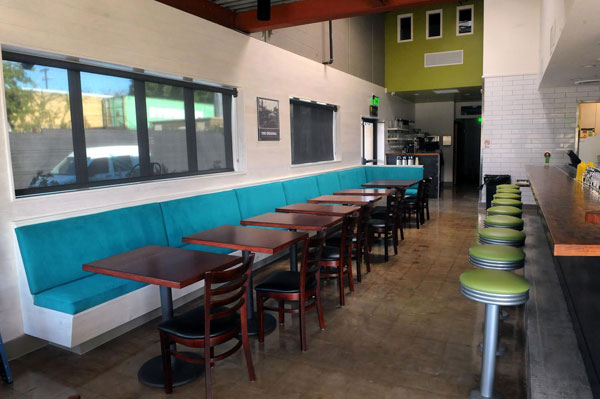 The new cafe is larger and brighter that the original with high ceilings that provide an airy, expansive feel to the traditional diner footprint. All the familiar elements are in place – everything is just roomier and more comfortable. The community table sits in the sunny front window, carefully-placed stools face the expanded open kitchen line, and a row of two-top tables line up to a cushy, upholstered banquette along the west wall. The bathrooms are roomy and handicapped accessible. The covered dining patio is shaded from the west sun and is likely to be a popular dining spot most of the year. Davis is pleased to finally provide her staff with a convenient walk-in cooler, dry storage shelving, and a dish room. Design-wise, the new spot is everything anyone could ask for in a neighborhood restaurant.

When we returned for breakfast during the soft opening week, Davis and Kissner were busy working the full dining room, chatting with customers about longer than average ticket times and explaining how long it would take to make a second batch of the artisan cheese grits. Nick Cruz and his team were cooking furiously in full view of the diners, headbands keeping the sweat out of the eyes. "On the line at the other place, they were used to a two-step. This here is a jitterbug," Davis told me ruefully.

She's right, of course, and the kitchen staff may not be quite ready to be overrun by opening crowds. But the truth is, no matter how much planning is done, no kitchen staff gets into an efficient working groove until they've fed enough full houses to have a realistic idea of how much food to prep every day. It shouldn't be long before Cruz and his team master the jitterbug speed necessary to put the food out in a timely fashion, with plenty of grits on hand.

According to Debbie Davis, now that they've seen the new Counter in operation, she and the team are taking a few days this week to "regroup" and solve some of the problems that cropped up last week. They'll do another soft opening weekend starting on Friday, then shoot for a more high profile grand opening after that. 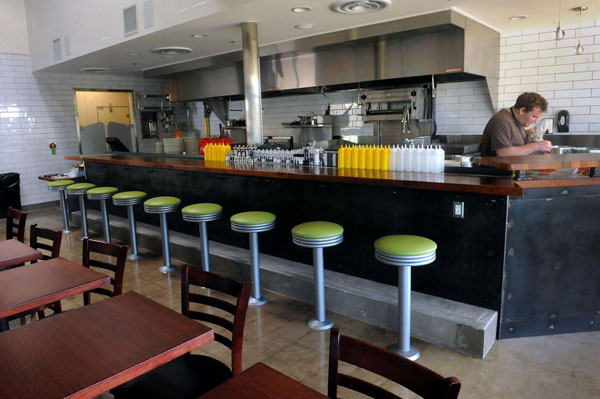