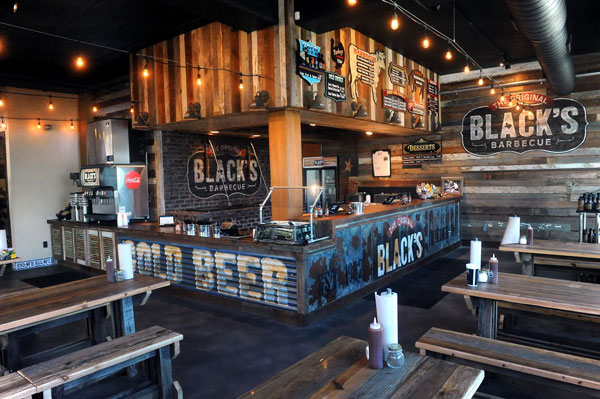 If there was any doubt about whether or not Lockhart's venerable Black family supports this particular foray into the Austin market, one look around the dining room should put that question to rest. The walls are graced with heirloom family photos documenting various stages of Edgar and Norma Jean Black's respected family business.

Black's Barbecue was founded in 1932 when Edgar Black, Sr. took over an existing meat market in Lockhart. Edgar Black, Jr. built the brick pit still in use when he and wife Norma Jean took over in the late Forties. They still keep an eye on things these days, even though son Kent Black directs operations in Lockhart and grandson Barrett Black runs the new Austin outpost.

"My Mom was responsible for choosing and framing all the family pictures and my grandparents have called every day, wanting to know how things are going up here," says Barrett, proudly decked out in a Black's shirt with "4th Generation" embroidered above the pocket. Barrett makes it clear that opening a storefront in Austin has been a team effort, including the participation of both the previous generations, longtime Lockhart employees, and new Austin hires.

In addition to all the family photos, the interior is done in exposed brick with distressed wood and tin accents, solid tables and benches, and a long mesquite counter top just like the one in the original restaurant. The decor evokes a rural feel and even though there are state-of-the-art electronic ordering stations on the counter, a substantial butcher block cutting station behind the counter stands as a testament to the historic heritage of the business. 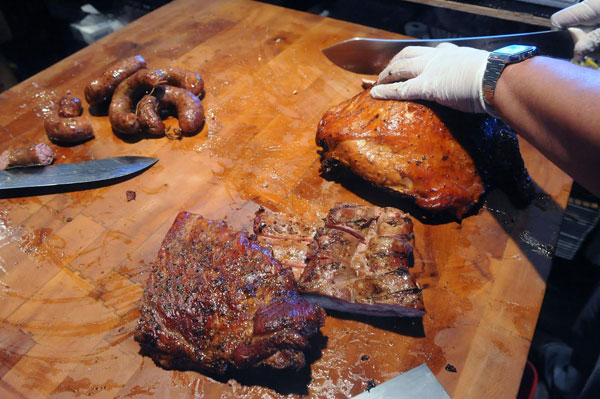 "For years, people have been asking, 'When are you coming to Austin? Why don't you open in Austin?,' and it feels good to finally give them what they've asked for," says Barrett from a table in the UT campus-area storefront. Although the interior offers the aroma of smoked meats, there's no actual smoking going on at the location. The meats served here are trucked in daily off the pit 30 miles away in Lockhart. "We looked at all different kinds of equipment to make sure we were using what was best to maintain the quality of the meat," Barrett explains.

Black's offers fatty and lean brisket, link sausages, pork ribs, beef ribs, and turkey all seasoned with the original 1932 dry rub formula. There's sweet coleslaw, mustard-y potato salad, and Norma Jean's special recipe beans, plus pickles, onions, jalapenos, and light bread. They've got tea, sodas, and a selection of local craft beers in cans and bottles to wet your whistle. Squeeze bottles of barbecue sauce are handy. When I asked Barrett if the sauce was his grandmother's blend, he laughed and said, "yes, I want to stay in the family!"

During this initial soft opening phase, Black's is open from 11am to 9pm daily. "People in the neighborhood are already finding us at lunchtime and we'll give it some time to see how the evening business develops. We might end up staying open later if there's a demand," Barrett explained. The dining room has a couple of flat screen TV's tuned to sports, which should appeal to a student clientele, and Black's shares a shaded dining patio with Hopfields for comfortable alfresco dining.

The Austin Black's will celebrate with a grand opening on Saturday, Nov. 8. Long-range plans call for the addition of occasional barbecue and beer pairing dinners featuring local brewers and Barrett is even considering adding pulled pork sandwiches to the menu. "Lots of people like pulled pork and we've had some requests, so I'm thinking about it," he reports. Pulled pork or not, Barrett Black makes it clear the fourth generation of his family plans to have an active culinary presence in Austin for years to come.