We sometimes wonder if Paul Qui practices his cross-armed pose in front of a mirror in preparation for the next photo shoot. We're sure it helps to have a Blue Steel when the national press has your number on speed dial.

It's not a huge surprise that Esquire would be interested in Qui's really, really, ridiculously good cooking, but we're still happy when our homegrown heroes get a nod. And in this case, the nod is a big one. The men's magazine has named Qui its Chef of the Year in its reworked – and renamed – American Food and Drink Awards.

According to Josh Ozersky, "Qui is a true sui generis talent, and none of his work—currently on display in his fantastic new restaurant, called Qui—is easily classified. He uses tweezers, but he's not a tweezer chef. He cooks large blocks of weighty beef, all salt and sizzle and rugged oomph, but his new place is no meatery. His vegetable dishes, like his "Ode to Michel Bras," a paean to the French salad guru, are marvels of delicacy and detailed composition, but he doesn't claim to be Mr. Seasonality."

Mr. "Rugged Oomph," however, does have a ring to it. 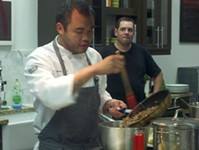