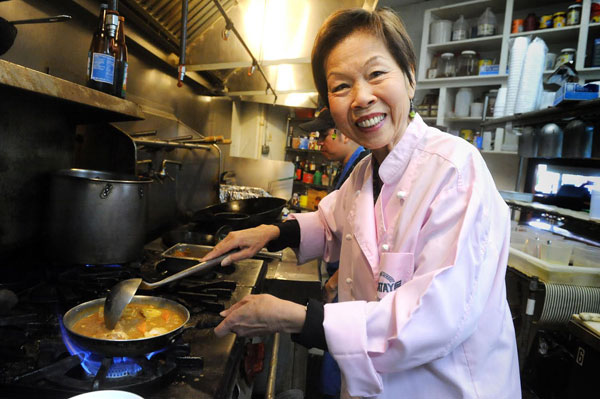 In recent years, we've become accustomed to women with culinary degrees being in charge Austin restaurant kitchens, but since chef Foo Swasdee opened Satay in 1987, she has possibly been the only person with a doctorate in food science owning and running a local restaurant.

Rommanee "Foo" Lopitakwong came to the US from her native Thailand to continue her studies in food sciences at Texas A&M University. She married fellow Thai student, Manot Swasdee, in 1977 and graduated with a Ph.D. in 1980. After college, the Swasdees moved to Battle Creek, Michigan, where Foo spent four years working in the research kitchens of the American food giant, Kellogg's.

Living in a country where the foods of her homeland were still relatively rare inspired Foo to put her newly acquired research and development experience to more personal use. The Swasdees moved back to Texas, settling in Austin, where Foo and a friend operated an exclusive ladies clothing boutique called Kikuya while she formulated plans for a restaurant.

Satay (3202 W. Anderson Ln., #205) opened in 1987 as one of Austin's first eateries to offer a pan-Asian line-up of dishes. Their Southeast Asian menu reflected the culinary influences of Thailand, Indonesia, India, and China and the restaurant soon developed a loyal and enthusiastic following. During the years Foo was building Satay's success, the Swasdees made frequent trips to Thailand to visit family and get culinary inspiration, even leading culinary tours for American friends on occasion.

Meanwhile, the food scientist in the kitchen used Satay as the testing ground for a line of authentic sauces and condiments. Once they were successful in the restaurant, the products moved on to packaging, then wholesale and retail sale. Today, Swasdee's signature line of sauces and condiments is produced by a contract packer in nearby Fredericksburg. The majority of the products are made in bulk packages for sale to restaurants with wide distribution across the United States. A smaller line is still produced for retail sale in grocery stores and specialty markets.

Although Austin's Asian restaurant market has changed dramatically since the days when Satay was one of the only Thai restaurants in town, the Swasdees still welcome a loyal clientele to their eatery and Foo stays busy looking for ways to attract new diners.

What If Your Restaurant Doesn't Need Redemption?
Getting Satay ready for its close-up