Can Thug Kitchen Stand the Heat? 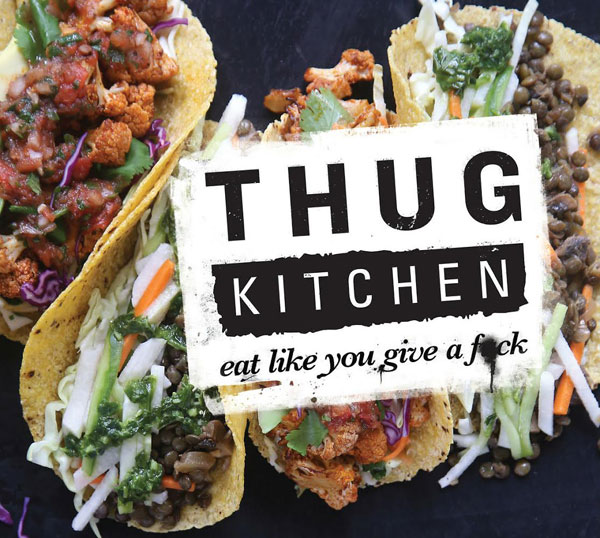 When I spoke to Michelle Davis and Matt Holloway, the authors of the previously anonymous blog Thug Kitchen and its accompanying cookbook (released October 7), shit hadn’t gotten that real yet. Sure, people were pissed that the L.A.­-based duo turned out to be young, white, hipsters – but the real drama lay ahead.

In the week or so since the book came out, the Thugs (ugh) have canceled events in the Bay Area due to planned protests and sparked a far-reaching conversation about the expletive-laden blog and book’s deployment of the word “thug” and its potentially racist implications.

Some folks are shocked that people were shocked that the authors of the blog turned out to be white. Some people are crying, “cultural appropriation!” But it’s difficult to imagine what culture is being appropriated by peppering recipes for sriracha roasted cauliflower with expletives or using the word "thug" in this context. A more precise criticism might be that Davis and Holloway are trafficking in (and profiting from) a stereotype of Black people that has very little basis in reality but is nonetheless damaging.

On the other hand, feminist thought leader and prolific writer Roxane Gay reckons that if your mind automatically went to “Black people” when you read the word “thug,” then maybe you’re the problem.

Amid the torches, pitchforks, and think pieces, Davis and Holloway have a simple explanation (possibly publisher­ massaged): “We understand that thug is a loaded word, but we wanted everybody to be a bad ass, to have that aggression,” says Davis. “The climate around the word thug is different now than it was when we started the site."

“We chose that direction because vegans have a reputation of being stuffy and self­righteous,” she continues. “We want people to realize that you can be normal. For a long time I was the only vegan I knew, and it’s really hard to get people to try your food and not think that you’re going to call people on every thing, you’re a normal person. We walk among you.”

Davis, who has been vegan for 11 years, and Holloway, a vegetarian who recently went vegan, claim that the goal of the site and cookbook has always been just to get people to eat more vegetables, not necessarily to join the vegan lifestyle. “We’re happy that people are using our recipes to eat more vegetables. If you want to add some chicken or sprinkle some cheese on that shit, be our guest,” says Davis.

Not that the recipes need it. I’ve long been a fan of the roasted chickpea and broccoli burritos, and I’ve already flagged several recipes in the cookbook that look particularly tasty, including the roasted beer and lime cauliflower tacos and the chocolate chip and almond butter cookies. Politics aside, on the whole, the Thug Kitchen cookbook makes clean, healthy eating look not only doable, but pleasurable.

As to the controversy about the use of the word “thug” and whether it is racist (which seems to be the stasis point in this argument), well, you can ask Davis and Holloway themselves when they appear at BookPeople tomorrow, October 16, at 7pm.