Cochon 555 founder is high off the hog 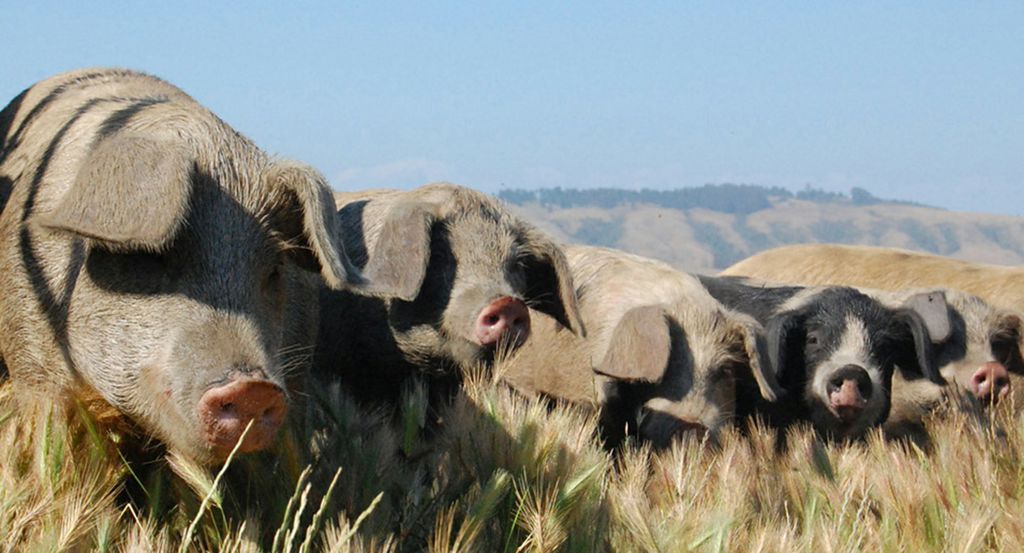 On Sunday, there's going to be a smack down. Five chefs will be duking it out to be the Cochon Heritage BBQ King, transforming 200 pound heritage breed pigs into six dishes for a panel of distinguished judges (and one Chronicle food editor).

Daniel Olivella (Barlata), Ned Elliott (Foreign & Domestic), Dustin Harvey (East Side King), Justin Yu (Oxheart in Houston), and Mat Clouser (Swift’s Attic) are no doubt sharpening their knives as we speak. We'll have the results next week, but in the meantime, we emailed Cochon 555 founder Brady Lowe to discuss what it means to pig out.

The Austin Chronicle: Why heritage barbecue?

Brady Lowe: As Americans, we see BBQ as an English-speaking cuisine, and we are misled. Here in the states, we are lucky enough to be caretakers to a special extension to a living, breathing social act of eating. This global BBQ Beast started its trek to America hundreds of years ago, and for centuries, BBQ groups have been gathering by other names, enjoying locally spiced foods over fire. Fire cooking (Mangal, Satay, Barbicue, Barbacoa, Luau, BBQ) has been blazing a path with worldly travelers since the dawn of the Spice Route. These  longstanding BBQ traditions are rooted in communities that never knew industrial farming and have become part of the “heritage” conversation in each culinary community. Take, for example, the definition of Heritage Breed pigs – pigs that come from bloodlines going back hundreds of years. Because of their lifestyle and genetics, different breeds became known for having certain characteristics, including rich and hearty flavors, distinct marbling and creamy fat.

For hundreds of years, people have been protecting heritage pig breeds from extinction – and that task is not easy. Traditional “ Heritage" Breeds have been trending in the culinary landscape, which is a testament to promoting local and supporting family farming. If we want safe and healthy food choices in the future, we need heritage species being raised on family farms and this is 100% what the Cochon US Tour is all about. My hope is that "Heritage BBQ” will come to be known as a style of cooking that illustrates rich and hearty flavors and includes hospitality, gathering around fire, and supporting local food producers. To preserve our heritage and nurture our stateside culinary traditions, chefs and restaurants need to be aware of how to build sustaining models around local agriculture - and “Heritage BBQ” is a way for us to identify other successful culinary stories in hopes to learn from and support our local community.

Heritage BBQ is simply an edible education of the world’s greatest moments in BBQ. We are seeing more and more interest from the chef community, because it allows them to look into the archives of human history and to cook from and celebrate some of the tastiest cultures. As an educator and event producer, I don’t feel I am trying to rewrite history, but rather share a trail of BBQ breadcrumbs that have been around since we started the process of cooking spiced foods over fire.

AC: The line-up of competitors are not the typical celebrities of Austin barbecue (Aaron Franklin et al). How were the chefs selected?

BL: The lineup consists of chefs who understand whole animals and have backgrounds in traveling, cooking, and celebrating grilling cultures around the world. While the chefs themselves may be competing, the last thing I want to do is create a “Competition-Style" BBQ of American styles. The story is wide-open to so many cultures and styles to learn from, and our goal is to increase consumption of heritage breed pigs raised by family farms. The chefs cooking with local sourcing in focus, are part of the selection process. The event showcases chefs who love cooking whole animal, they promote farms on their menus, they overlay the story of local food education onto their staff, and have them share the passion with the consumers. Heritage BBQ comes from a belief in cooking one whole animal at a time (pig, duck, beef, lamb, bird, and goat). As Americans we see BBQ as smoke rings, sauce, rubs and sides, but in reality, BBQ is a global opportunity to grill what you want and should give a restaurant the opportunity to expand their menu to support local farms.

The five chefs are cooking their interpretation of history based on travels, education, mentors and what they believe are great BBQ dishes from grilling cultures. What we know as American BBQ (Competition-Style, Texas, Lexington, Memphis, Carolinas, KC, Backyard) is amazing, but we need to welcome other cultures to the table and expand the opportunity for everyone who wants to support local. If you look at the lineup of twenty-five chefs for the entire five-city Heritage BBQ series, you will see our goal of showcasing every member of the BBQ WORLD community and it’s awesome. In addition to the amazing line up in Austin cooking whole pig influenced by Spanish, Asian and American styles, we also invited amazing Houston chefs such as Killen’s BBQ, Fege’s BBQ, Kata Robata, and Dosi Restaurant & Soju Bar, each of whom is doing their favorite dish from a different country in a showcase called “BBQ Traditions." All of the participants embrace and celebrate responsible agriculture, and that says a lot for the culinary landscape.

AC: Pork is not typically part of the Texas barbecue vernacular. Is the approach to pork different in Texas than in the deep South?

BL: BBQ is different everywhere, and I see this since I travel year round. We are keeping in mind that Texas is cattle country. Everywhere else is getting piggy, with the exception of California, which is a good model for Texas with equal amounts of cattle and pig. There is tons of pig in Georgia, more in the Carolinas and tons in the Midwest. In the last 40 years, the food industry has been successful at pushing the burden of processing whole animal back on the small farmer and the result, butchers are out of jobs in the restaurant and retail shops. It’s hard to answer this question because the processor really determines what cooks have access to, and thus what they sell to the consumer.

The BBQ community is a little fragmented for me. The flavors are outstanding, but the work we are seeing across the country points to something new on the horizon. For example, totally hypothetical, what if Aaron Franklin found a new pig farmer, and could support the opening of Franklins #2 with heritage pork from this farm? This would allow the restaurant to diversify the menu and spotlight pig, support the local farm, and even include a couple of dishes that were globally influenced and less of a typical Texan style. My question, would there be push-back from the die-hards? My guess is yes, but I am confident that sentiment would that change over 30 years.

So my goal is to educate consumers with the most amazing culinary experiences possible, which in turn will give chefs more opportunities to open places that support local. I don’t think America has consumer demand for local food support, but right now, existing BBQ restaurants are doing their best with what they have. They are trying to keep up with demand and use the best products that they can, all at a realistic price. Obviously, safe food raised by family farms can cost a little bit more. Consumers need to support that choice, but the chefs are the ones making the final call.

AC: What do you mean when you say you "are on a mission to redefine BBQ as social eating."

BL: I grew up in Iowa, and BBQ to me meant backyard grilling, sharing with friends and socializing. It wasn’t until years later when my concept of BBQ was challenged by my peers that I fully understood the regionalized BBQ argument. A couple associates from the New South called me out, and told me “Backyard Grilling (hot dogs, burgers, boiled ribs then grilled) is not ‘real’ BBQ,” and I began to feel alienated. I then had a friend from Korea come over for my BBQ (which he loved!), and he told me all about Korean BBQ, which goes by many names.

The next week, I went over to his house to try what he called BBQ and it was awesome. As I matured and became more educated on grilling cultures, I started to understand BBQ as hospitality and the act of social eating.  The Middle Eastern name for BBQ is “Mangal" and is a social context, it’s involves gathering together and having a grilled meal. A new sense of confidence allowed me to move the conversation of BBQ from “that’s not tomato based” or “that has the best smoke ring,” to “which cultures are woven into the fabric of America BBQ?”

If you look at various traditions around the world, they all have the tradition of BBQ, it just goes by different names (Asado, Char Siu, Hibachi, Korean, Nướng, Barbacoa). The commonality of BBQ involves gathering together to share a meal of some type of grilling, and a celebration of local foods, spices, and talent. These global traditions are over 100 years old, and took root before industrial farming. Through education, my goal is to bring out the fun, communal aspects of BBQ, and to bring back the idea of eating together in celebration of making and having better food choices. It is the arguments over smoke, tomato sauce, vinegar and sides that distract us from creating better food choices.

AC: Why is it important to consume heritage breeds?

BL: There is a master plan in play. I have been at this for 6 years, and I know one thing – the main factors are flavor and the great people raising heritage breed pigs who need to sell more animals. These great farmers have a vision for safer, healthier, food choices. It’s not easy to find them right now, but it’s very important for people to buy these pigs; you have to hit up the farmers market, or butcher shops like Salt & Time, and even put orders in via telephone.

The more pigs we buy, the more pigs are raised, the more people eat up this hyper-local food movement. Ultimately, if we want our kids to have sustainable options, to be able to buy safe, honest food and know where to get it, we have to create this legacy. Farmers, chefs, buyers, and consumers are the gateway to more Heritage Pork. Once you have it, you’ll realize that store-bough pork is not the other white meat - we should be looking for real pork, and flavor should just be standard. Heritage BBQ gets people interested in joining this local food movement. Through consuming heritage pigs, we create long-term growth, jobs on farms and better food choices for the future.