Gabrielle Hamilton, chef/owner of the popular Prune restaurant on Manhattan's Lower East Side, will present dinner Friday night on the rooftop deck of the Contemporary Austin Downtown. The dinner is hosted by Tribeza magazine as part of the 11th annual Austin Style Week and benefits Creative Action.

Hamilton is a rare combination of creative chef and skilled writer, one of only two chefs to win James Beard Foundation awards for Best Chef (NYC 2011) and Literary Food Writing for her memoir Blood, Bones, and Butter in 2012. She's in Austin at the invitation of Paula Disbrowe, editor-in-chief of Tribeza magazine and a James Beard award-winning cookbook writer herself.

While she's in Austin, Gabrielle Hamilton will work in the kitchens of Jeffrey's and the Josephine House and she'll be assisted at the Blooms + Butter dinner by chefs Larry McGuire and Rebecca Meeker. The menu will be based on dishes from Hamilton's new cookbook, Prune (Random House, $45, 576 pp.), which will be released in November, just after the 15th anniversary of Hamilton's restaurant. Tickets to the dinner are still available here.

We had the chance to chat with Gabrielle Hamilton last week about the dinner, her new cookbook, and balancing the cooking and writing aspects of her life.

Austin Chronicle: Is this your first visit to Austin?

Gabrielle Hamilton: No, I've been down two or three times before but not as part of an event.

AC: How did this come about?

GH: Paula Disbrowe is a friend of mine and she invited me to do a dinner. The timing worked out with the new book coming out.

AC: What can you tell us about the dinner?

GH: The menu will be pretty Prune-y; things that I'm happy to cook and eat.

AC: Speaking of Prune, for people here who've never been, tell us about it.

GH: It's tiny, about 600 square feet with an open kitchen. Only 30 seats with four at the bar if people cram their knees together. A three-person line; a grill person, someone on saute, and then the lead who does cold plates, salads, desserts, and expediting. That's where I usually work so I am the final arbiter of what food goes to the table.

AC: The new cookbook has recipes from 15 years at Prune. So often restaurant chef cookbooks are not very accessible to the home cook. How did you address that issue?

GH: The cookbook was not written with home cooks in mind at all, but Prune food is essentially home cooking in a restaurant setting. I'm dying to find out if home cooks find it useable.

AC: Restaurant cooking and writing are such drastically different activities. One is interactive with pretty immediate gratification – you cook the food, people eat it, and you get a reaction. But writing is solitary and writers are rarely present when their work is consumed or evokes response. How do you make that transition in your life?

GH: I find it very pleasant, exercising or flexing both muscles. I tend to write early in the day when it's more comfortable for me to dig down into myself. Later in the day, I'm ready for more physical activity at the restaurant. I'm thrilled to have the opportunity to balance both; feels like a perfect partnership.

AC: Now that the cookbook is coming out, do you have any ideas about what you'll work on next?

GH: I'm newly returned to Prune after a couple of years consumed with other career and family issues, so it's a profound delight to be back in and around and all over my restaurant. The first book was more literary and by the end of writing Blood, Bones, and Butter, I felt like I was just getting my skill set in hand. Then the cookbook was in a different direction, so now I'm thinking about another literary project – maybe a novel. 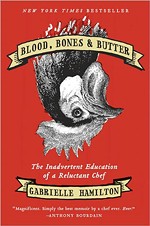 Blood, Bones & Butter: The Inadvertent Education of a Reluctant Chef
Sit down with a book when it's too hot to cook