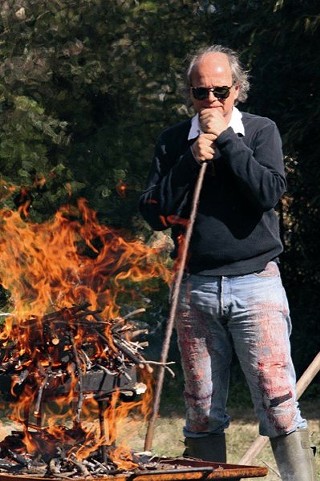 At a time when cooking is becoming a spectator sport on reality television, Argentine chef Francis Mallmann uses his own wildly popular Spanish-language cooking programs and his cookbooks to encourage cooks to "turn off the television and go outside."

The new book opens with an evocative story about the outdoor cooking experience that provided a new direction for the classically trained chef's cooking and career. As Mallmann poetically describes building his fire by a cool mountain spring, roasting potatoes and onions in butter on a heated flat river rock, and finally stirring in a couple of fresh eggs to complete a tortilla Espanola, the scene is vivid in it's beauty and simplicity. The story delivers the very heart of Mallmann's message - use a few fresh ingredients and the proper application of fire to create a deeply satisfying meal.

Mallmann directs cooks to always "make the fire fit the food" and describes his preferred cooking methods in his opening: la parilla - the grill; la chapa - the griddle; rescoldo - ashes and embers; and el horno - a brick or clay oven. He advocates the use of hardy cast iron cooking equipment and cooking over hardwood lump charcoal lit by an ordinary chimney-style charcoal starter; never pressed sawdust briquettes or chemical starters.

The recipes are broken down into appetizers and salads; light meals; beef, lamb, and pork; birds; fish and shellfish; vegetables and beans; desserts; and country breads; all of which can and should be prepared outdoors. He also includes recipes for basics such as stocks, sauces, and flavored oils to augment many of the recipes and provides useful suggestions for cooking tools that will come in handy with his style of cooking.

As Mallmann promises early on, the mostly accessible recipes are comprised of a few simple ingredients and rely on live-fire, outdoor cooking methods to impart the desired flavors. Though the items cooked in ashes and embers aren't all that appealing to me personally, I found many of the grilled and roasted dishes very inviting. Each chapter opens with stories about Mallmann's world travels and his international cooking experiences. The book is illustrated with mouth-watering, rustic food photos and picaresque shots of the exotic locales where chef Mallmann creates outdoor dining experiences for his guests.

Nationally known chefs such as Anthony Bourdain and Mario Batali have extolled Frances Mallmann's cooking. After Mallmann's dramatic local presentation at Central Market's Passport Brazil a few years back, more than one Austin chef was inspired to commission an outdoor rig for live-fire, whole animal cooking and several big outdoor dinner events have been the result. Home cooks need not cook an entire side of beef or set up camp in a Patagonian mountain meadow to make use of this book. With chef Mallmann's encouragement and the right fire, it's possible to prepare crowd-pleasing meals with a backyard grill or griddle.