Gossip and Goat at TMBBQ Fest 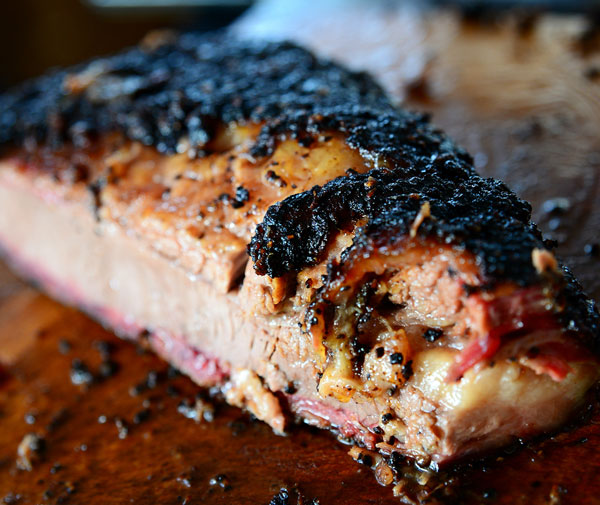 An early cold front with overcast skies and cool breezes and an expanded site plan that divided barbecue vendors between the Long Center circle drive and the City Terrace made for a very comfortable afternoon at the Fifth Annual Texas Monthly BBQ Fest on Sunday, Sept. 14.

The magazine invited many of the top 50 meat-smoking outfits recognized in their most recent best barbecue issue to the big party and, as always, tickets were a hot commodity for weeks. This year, each booth not only bore the name of the barbecue vendor, but also prominently displayed the name of the person or persons responsible for running the pits – the most important job in the grand scheme of Texas barbecue. Expanded seating areas on the lawn around the driveway and the terrace provided plenty of comfortable seating for folks to eat, drink, visit, and plan their next foray into the meaty wonderland.

There were several more vendors from west of Austin in attendance this year, with outfits from Spicewood, Fredericksburg, Llano, Pecos, and Amarillo all represented. This meant there was more mesquite smoke on some of the meat and definitely more wafting in the air, providing a wider variety of smoked meat flavor for diners and sending this West Texas refugee home with a definite mesquite allergy headache. Live music, cold beer, and cocktails flowed in abundance, but I missed the big coolers of iced Sweet Leaf tea and lemonade from year's past. A $3.50 quart of flavorless lemonade just didn't hit the spot the way cold peach tea always has.

While many vendors opted to serve brisket and sausage, there were plenty of pork ribs, a few examples of moist, smokey turkey, some chunks of beef trimmed of monster ribs, and a few specialties like barbecued goat (Lockhart Smokehouse from Dallas), slices of mesquite-smoked pork chops (Cooper's from Llano), and Lamb Pops (Louie Mueller's from Taylor) that sent buzzes through the crowd. Opie's brought their inimitable sides for folks who like some vegetables with their meat and there was an ultra-crunchy jicama slaw dressing up the smoked pork belly from San Antonio's The Granary. Austin favorites la Barbecue and Franklin Barbecue made very strong showings, each generating long, enthusiastic lines.

I had a chance to chat with Bruce Evans, managing partner of the upcoming Cooper's Old Time Pit Barbecue (217 Congress). Evans said they've recently opened a successful outlet in New Braunfels and are about to begin construction on the barbecue joint that includes a full bar and a live music venue in Downtown Austin. He promised to keep us posted about an opening date.

Kent Black, third generation pitmaster of one of the Central Texas barbecue royal families in Lockhart, reported that construction snags have slowed down the opening of their Austin storefront, but he hopes to have the local outlet of the original Black's Barbecue (3110 Guadalupe) open by the end of the month. Meanwhile, he said his new Kent Black's Barbecue (500 Hull in San Marcos) has received an enthusiastic response in that community where he catered lunch for 800 Navy fans before Texas State played the Naval Academy on Saturday.