Judy Jetson is all that's missing from perfect midcentury decor 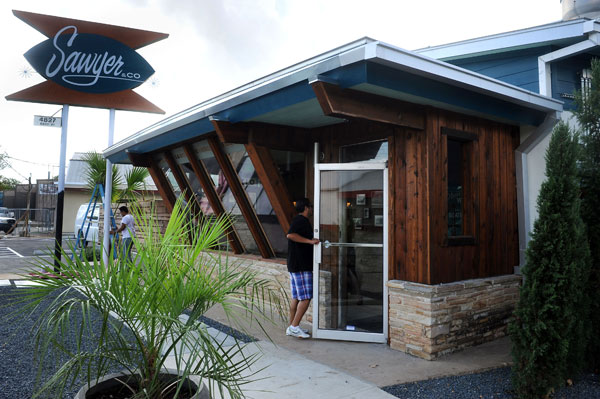 When the Fifties-era Arkie's Grill closed quietly in 2012, a landmark Austin eatery was lost. Now, new owners Lauren and Stephen Shallcross and Mickie Spencer have breathed new life into the old spot, honoring the past while setting it up for future success

The Shallcrosses own 2Dine4 Catering and Swoop Events (3008 Gonzales), where they host the popular Supper Friends supper club. This is their first restaurant venture. When they first bought the property two years ago, Stephen Shallcross described the new venture as a "New Orleans-inspired diner serving classy Texas comfort food with a Louisiana flair." They christened the new endeavor Sawyer & Co. in honor of original owner Faye "Arkie" Sawyer. 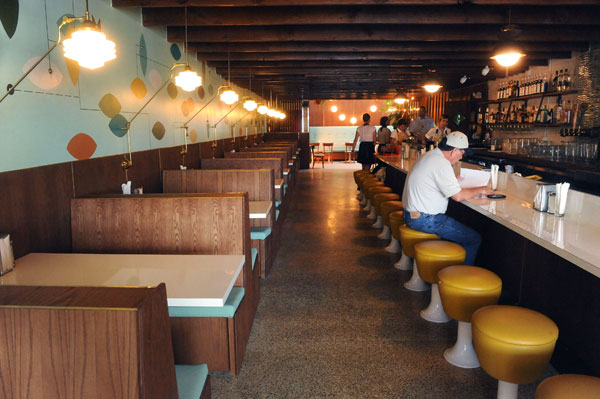 Ever the DIY fan, Spencer painted the mural in the main dining room and designed the aprons worn by the servers. She had the original Arkie's booths repainted at a nearby auto body shop and is using them as seating in the patio (carpeted with AstroTurf, natch). The outdoor waiting area also sports AstroTurf and features period lawn furniture. Judy Jetson in heels and pearls is literally all that's missing.

One thing available at Sawyer & Co. that was never offered at Arkie's is full bar service. The bar is just behind the curve in the counter near the entrance. There's a vintage Spartan trailer outside that was slated to become a second bar, but that plan is currently stymied by the fact that the city of Austin has no code book for mobile alcohol vending. Meanwhile, the Sawyer bar is under the direction of Carley Dunavant (Drink.Well, Odd Duck) with some consultation by Jason Stevens (Wonderland). Dunavant says they'll be offering boozy milkshakes, an ultra-frothy Ramos Gin Fizz, and three cocktails on tap – a Hurricane, a Pimm's Cup, and the Louisiana Fix – a NOLA inspired drink that will change seasonally. They'll have their own Praline Sazerac, but will gladly make the classic version for purists. Look for Louisiana's Abita Amber and Austin's Live Oak Hefeweizen on draft, along with a impressive selection of cans and bottles. 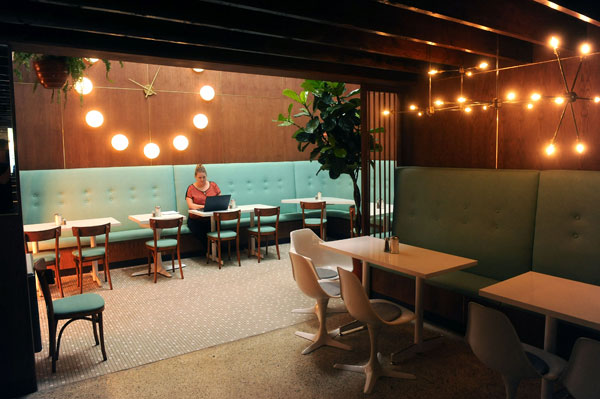 The food at Sawyer & Co. has been designed by Stephen Shallcross and consulting chef Happy Abdelbaki, longtime friends from Baton Rouge. Their menu choices reflect the flavors and dishes that resonate with their strongest culinary memories: biscuits and pancakes with Steen's Cane Syrup; jambalaya, gumbo, red beans and rice made with Manda's sausage from Baton Rouge; and their favorite po'boy bread from John Gendusa Bakery in New Orleans' Gentilly neighborhood.

Breakfast offerings will include a rotating selection of omelets (cheeseburger!) and scrambles (crawfish!) – plus grits, Brabant potatoes, biscuits, pancakes, praline bacon, breakfast sandwiches, and tacos. Lunch and dinner will feature daily blue plate specials such as red beans and rice with cornbread, gumbo, jambalaya, roast beef with gravy and mashed potatoes – all augmented by a rotating list of seasonal à la carte vegetable sides. An inviting selection of pies will be prepared by pastry chef Claudia Vidal, using many of Abdelbaki's own recipes, such as the bourbon chocolate pecan pie that was his signature dessert at the Bourbon Orleans Hotel.

One NOLA staple that is not currently on the Sawyer menu is beignets, but don't despair just yet. If the trailer bar idea doesn't pan out, Shallcross and Abdelbaki are discussing ways to make the definitive New Orleans pastry available with café au lait. I'll be there, for sure. 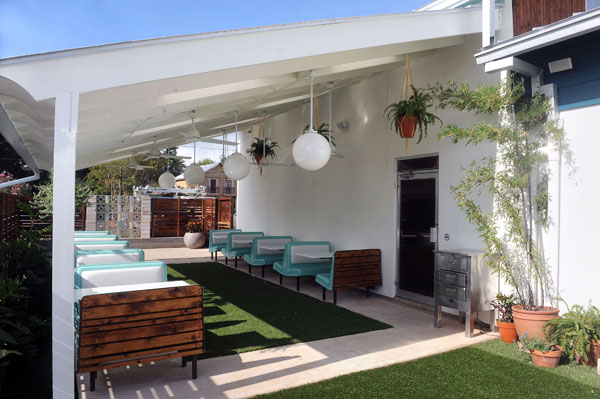 The day we visited for a friends and family menu tasting, the Sawyer team was still ironing out some glitches. Executive chef Chris Chism and his cooks were getting comfortable in the new kitchen. Shallcross was trying to find out what became of their second shipment of po'boy bread after it left New Orleans and anticipating the arrival of the repairman scheduled to do warranty work on the brand-new fryer system that "cost twice as much as my first car!" Though no one is going to mistake the new restaurant for the beloved old working man's diner, based on the way this place is coming together for the opening of breakfast and lunch later this week, we have no doubt Sawyer & Co. will soon be living up to the old Arkie's sign that said "Where friends, fair prices, and good food meet." 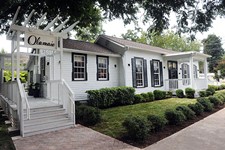