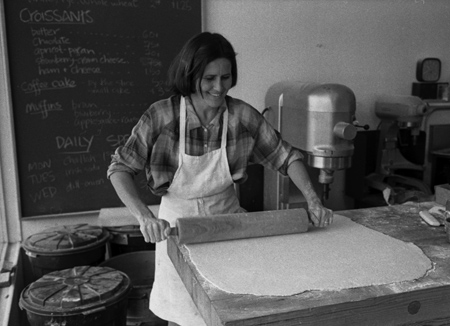 When Judy Willcott took some homemade baguettes to a dinner party in 1980, she could not have foreseen that the edible gift would ultimately provide the city of Austin with one of its favorite bakeries.

"I loved making bread; my mother-in-law was a bread baker and she taught me. I took some bread I'd made to a dinner party one night and Ron and Peggy Weiss liked it so much, they asked me to make bread for Jeffrey's," Willcott recalls. By that time, the 5-year-old Jeffrey's (1204 West Lynn) restaurant in Clarksville was already firmly established as Austin's fine dining destination.

Willcott started a wholesale bread business in her home kitchen in 1980, but the popularity of her loaves soon made it necessary to find a commercial work space. The first Texas French Bread location opened in a small storefront at 34th and Guadalupe in 1981. "We opened on a shoestring, really, and at first, all we sold were baguettes, brioche, and croissants," Wilcott says. Before long, she was providing bread to the now closed Basil's and the fledgling original Whole Foods Market. Her own shop had lines out the door most days.

The success of Judy's first store prompted the move to a larger space in a strip center a few blocks from the UT law school. Texas French Bread #2 (3211 Red River) sold good coffee and offered an expanded product line that included more breads and pastries, the ultra-chocolate Hyde Park fudge cake, coffee cake, lemon poppy-seed Hobbit Bread, and sandwiches made on croissants and various house breads. It quickly became the go-to spot for UT faculty and students alike in the days before there were myriad coffee shops, restaurants, and food trucks hugging the campus.

The Texas French Bread brand would expand over the next 12 years. Judy purchased the old Rome Inn in 1986 for another bakery and cafe outlet near campus and also opened satellite locations in strip malls around the quickly growing Austin metro area. At its peak in 1995, the company had 11 stores operating in Austin. However, ever-escalating rents and competition from successful grocery store bakeries (Whole Foods Bakehouse, the new Central Market) and coffee shops would make it necessary for Judy to rethink the business model. She would ultimately close all but the one bakery where she actually owned the property.

As often happens in the food business, real estate ownership turned out to be destiny. In 2006, Judy sold the last remaining Texas French Bread (2900 Rio Grande) outlet to her sons Ben and Murph Willcott. They've now put the next generation's personal stamp on an iconic local business. The old building has recently been refurbished and features a European-style bistro offering a locally sourced, farm-to-table menu complemented by beer and wine in addition to the bakery.

Judy Willcott currently enjoys her retirement at Rocky Creek Farm near Lampassas with partner Laurence Miller. And though she's yet to identify an emerging bread baker among her grandchildren, she envisions many more years of success for one of Austin's most respected culinary brands.